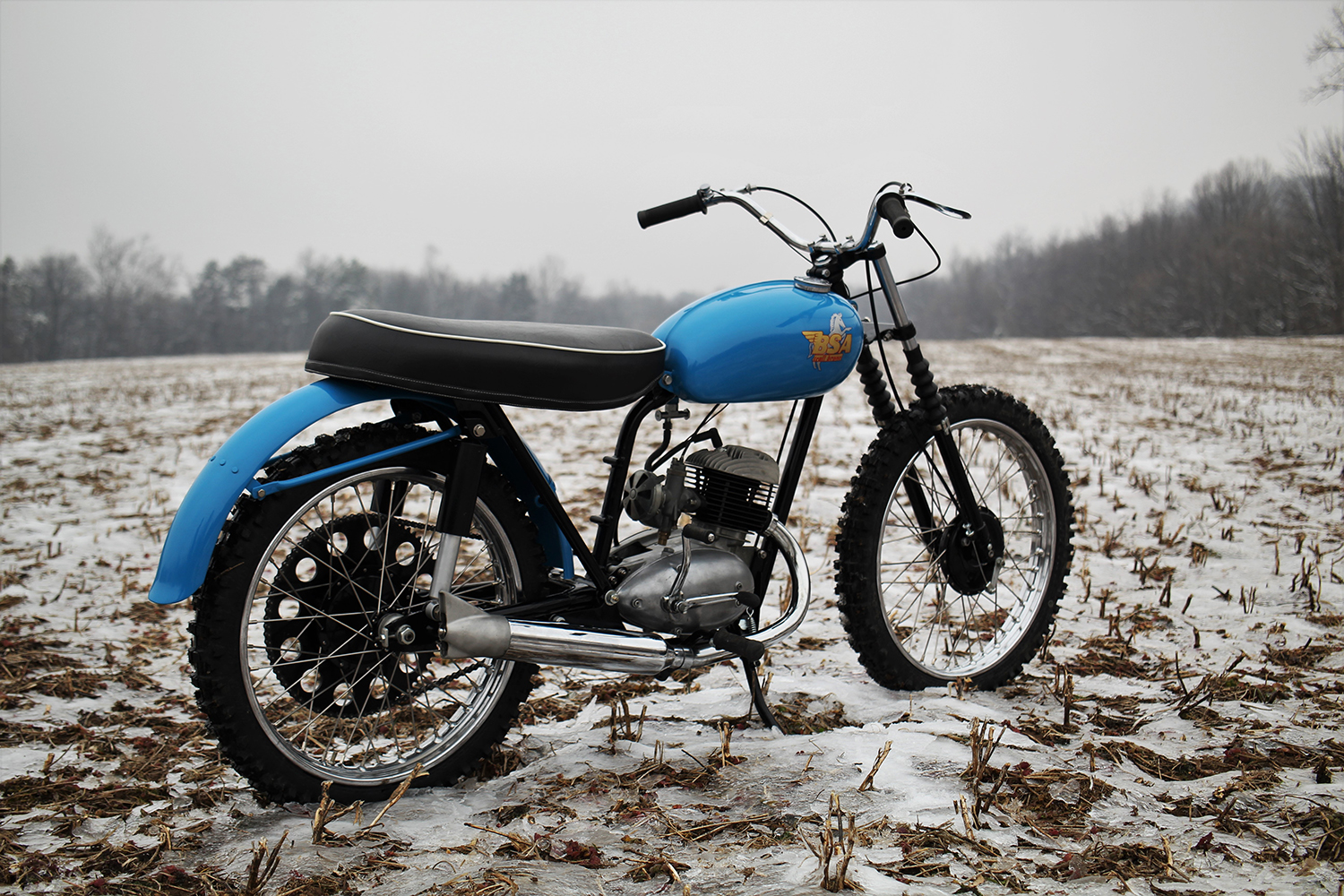 We all know one of those guys who has the coolest collection of motorcycles in his garage. You know him – he’s been hoarding bikes and parts for decades. And if you don’t know someone like that, then chances are you’ve at least heard stories of these local legends. Jeremy, from LC Fabrications in Virginia, is friends with such a man, named Bobby, who has been collecting bikes for years, from Vincents to vintage dirt bikes and everything in between. But it was probably the most unassuming motorcycle in Bobby’s barn that was to become LC Fabrications next project – a 1965 BSA Trail Bronc.

“Bobby had become interested in a Triumph Trident that I have had tucked away for years,” Jeremy explains. “But rather than just handing over the money, he started making ‘payments’. These payments were seldom in the form of cash, as he knows I’m a sucker for cool old junk.”

One day when Jeremy and his son Drake were over at Bobby’s place, his son locked eyes on a broken-down shell of a BSA dirt bike. By the end of the visit, Jeremy would be driving home in his 67′ Econoline van with the BSA in the back – the final payment for the Triumph.

The BSA turned out to be a 1965 Trail Bronc, which is essentially a stripped-down Bantam that was specifically built for the USA and designed to be marketed to American hunters and wilderness adventure-seekers. “With a bit of research, we found that the Bronc is actually a pretty rare bird,” says Jeremy. “Although one of the earliest examples of a purpose-built off-road motorcycle, it hit the market right around the same time as more powerful desert sleds were being built, leaving dealers struggling to make a sale on the little Bantam.”

The father-and-son team couldn’t wait to get started restoring this vintage two-stroke, starting with the basics like fixing broken pieces, reversing “modifications” that had been made, stripping, cleaning, sanding, painting and sourcing original style hardware. “As we got a bit deeper I found a few pieces which weren’t standard Bantam parts, but specific to the Trail Bronc. The obvious piece is the 80-tooth rear sprocket, which actually wasn’t too hard to reproduce using a blank industrial chain sprocket.”

Wanting to restore the bike to its former glory, Jeremy was adamant that the parts should be either original or at least made to the same size and materials. Obviously, with a bike like this, that creates some challenges. The parts that were missing were the bars, the rear fender, and the exhaust header pipe. “Fortunately, we had the bars and only one side of them was bent and twisted, so I was able to use the good portion as a pattern to make a new set.”

Moving onto a solution for the pipe, Jeremy had to study old photographs to work out the right scale so he could make the piece aesthetically accurate. Once he fabricated the perfect pipe, it was sent off to be chrome-plated.

The rear factory fenders that were sold on the stock bike weren’t actually practical at all for these vintage dirt bikes. “Virtually all examples have been torn off in the woods or chopped short to prevent the rider from doing so. I got lucky and was able to find an online Bantam forum where a guy had given dimensions of an original. So, we extended our original using a section from a Triumph front fender, which oddly enough was the exact profile.”

The frame was then painted with a single stage enamel – Jeremy hates seeing overdone restorations which are beautiful but unrealistic. “Although I see the dilemma in holding back the urge to use better, more modern finishes.” He did track down the codes for the original blue paint for the sheet metal and found a reproduction trail Bronc waterslide decal. “Unfortunately, when the $100 decal arrived it wasn’t worth the paper it was printed on, so I decided to use it as a pattern and hand painted the logo on the tank.”

To finish the bike off, the original timeworn seat was sent to Angie Dixon at Gas Axe Girl and let her work her magic. Of course, the finished saddle was done like the original, black with white piping and stitching.

When it came to firing up the old bike, Jeremy was a little apprehensive. “Well, it’s an old British two-stroke now, isn’t it,” smiles Jeremy. “A couple of days of tinkering and tuning and… well, it’s an old British two-stroke.” With his machine shop busy and paid projects begging for his attention, he now had little time and patience for the little Bantam. “My son, who has now joined the LC Fab team, looked me in the eye and told me ‘I’ve got this’. A day or two (and some of his first curse words) went by and he’d gotten her to run! Insert proud dad here!”

The finished product is a stunning little Trail Bronc that has been restored to how it looked when it first arrived off the ship from Britain almost 60 years ago. “I’ve always had an appreciation for beautifully done restorations, it’s honestly where much of the inspiration for my custom bikes has come from, but I’ve never taken an interest in doing one because building bikes, to me, is all about the creative design process. But this has been a great project with my son.”

Although this was a completely different project to what LC Fabrications are known for, Jeremy and Drake enjoyed the whole process and journey. We look forward to seeing what this father-and-son duo build next.