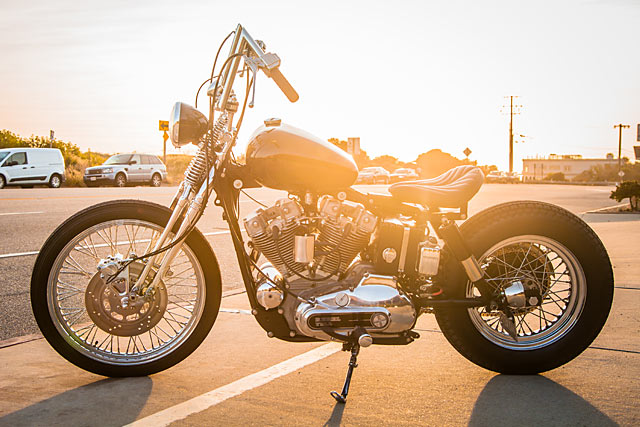 If you’ve been flicking through Pipeburn over the last few years you’ll have noticed a change – everyone is shifting away from traditional retro-styled builds. Tight, fast, water-cooled, turn-and-stop on a dime bikes are becoming more popular as more people are actually riding their custom machines and the zeitgeist finds it’s niche in everyday life. Thankfully for grumpy old bastards like me people are still building traditional, honest-to-god specials. And damn well, as Gasser Custom’s 1974 Ironhead Sportster shows. The build was actually sponsored by a company, Rebel Yell, purveyors of American spirits for those into the American Spirit. Over the last few years they’ve become increasingly invested in the custom motorcycle scene, sponsoring a series of primo motos displayed at the famed One Motorcycle show. Last year Gasser Customs turned out a modern Indian meaner than a Comanche bowman but this year they’ve wound the clock back. ‘It was inspired by the traditional ‘frisco’ style bobbers of California of the early 1970’s, incorporating some Dennis Hopper Easy Rider vibes with a darker edge’, Adam Gasser says. ‘We wanted to bring out more of the raw, stripped down look of that era that separated the men from the boys.’ And the golden age of hallucinogens, stonewashed jeans and rampant chest hair means there’s only one real manufacturer that could complete the look – Harley Davidson. The donor ‘74 Ironhead was completely disassembled and striped right down with the double cradle frame, which was given a nip and tuck before being powder coated black and rebuilt from tip to tail. All rollers that roll and all bearings that bear were replaced with everything touched off with all new stainless steel hardware. Underneath, the engine was in for some special treatment. The Ironhead was bored out to 1100cc’s and fitted with a gorgeous S&S Super B carburetor with cast aluminium intake. Most importantly, a custom stainless steel exhaust was fitted that barks out a tune more American than Stars and Stripes.‘This Sportster plays nothing but pure vintage American V-twin music!’ Adam proclaims. The colour scheme was inspired by the Rebel Yell company, with the deep reds and blacks matched to various vintage whiskeys produced by the Kentucky distillery, laid lightly on the 4 gallon gas tank, just the right size between ‘looks awesome’ and ‘where the fuck is the next petrol station?’. The bike also runs a right hand side shifter with a new primary, new clutch and custom stainless steel brake lines threading down to a restored Springer front end. Up top the Z-bars have a ten inch rise, fitted with new controls, an upgraded 55-watt headlight and Motogadget speedo and push button controls. The 21″ and 16″ wheels are fitted with new Avon Speedmaster MK2 tires, the same look as seen in the original Easy Rider movie on Peter Fonda’s Harley. Suspension is upgraded with new Hagon Shocks from their “Classics” series to add to the overall vintage appeal and keeping in line with the black, chrome and polished aluminum feel. The new custom solo ‘bobber style‘ seat was done in black leather and below it sits a new Shorai lithium battery. And what’s the Harley like to ride? ‘Riding The Gypsy gives you an immediate feeling of total freedom,’ Adam says. ‘’You get on and lose any sense of an agenda. You just get a clear head and ride wherever the wind takes you.’ For me that’s the same with any bike, but you’d struggle to find a better ride to do it on than this old Ironhead.