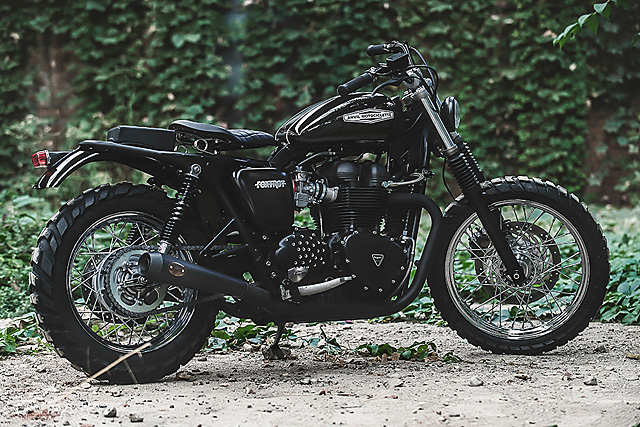 For a number of decades the AMA Grand National Championship was dominated by Americans riding American machinery from the big two; Harley Davidson and Indian. That was until the late ’60s when in the space of four years the likes of Gary Nixon and Gene Romero led the charge for British manufacturer Triumph to take out three championships. Unlike the Trackers created today, it was a time of big wide bars, tiny tanks and leather padded seats. The way you paid the racing bills was to be like legend Mike Anderson and work at the local dealership during the week. There were no corporates with big sponsor dollars, no millions to be made and some race tracks still displayed the sign “helmets recommended”. But it was a time of raw competition, big personalities and an authenticity that Italy’s Anvil Motociclette have come to love. With that spirit in mind they’ve built a bike named Foxtrot, a 2011 Triumph Bonneville 900, that dances rings around the competition. For the two Rock stars of the Italian custom scene, San Marco and Phonz of Anvil, it has been a year that has seen them gain a new appreciation for the old days of dirt track and take a departure from their usual path to custom bike Nirvana. There is no matte black paint, exposed raw aluminium or Mad Max like post-apocalyptic in your face, punk rock, aggression. No, this Triumph has a ’60s cool about it, with smooth lines, big comfy bars and quality leather in all the right places. But to truly make it their own it wouldn’t be Anvil without a truly Italian touch and the first thing they wanted to take care of was the fuel tank. “The tank was taken from an old Aermacchi Sprint positioned on the bike immediately takes on an old-fashioned charm.” `The little Italian company imported by the bigger American firm from Milwaukee makes the perfect addition and gives the Triumph both the right look for the period and a unique touch that will leave many asking, “What’s it from”? That sense of mystery deepens upon realisation as to what the tank is fitted to, a fuel injected bike, that now sports a tank from a small capacity carby fed machine. “In this bike we had to adapt a very small tank, and being the bike with electronic injection we had to move the fuel pump to the outside of the tank, creating a watertight box to hold the fuel pump hidden behind side panels of the bike, this operation was more complicated than this project, however, a very important task because you well know how important the is tank for the final design of the bike.” The small Italian tank sits beautifully on the frame and for something totally different Anvil decided to go with a gloss black paint finish. Although you can’t hide the matte black from the boys for long and the centre stripe receives their favourite colour broken up by two white pinstripes and beautifully applied Anvil logos on the sides. At the rear of the bike it was important for San Marco and Phonz to capture another look of the period and with the rear section of the subframe cut off it gave them exactly that chance. A new rear hoop is welded in place, but rather than being hidden it is left exposed as a fender mount like the bikes of the generation. The fender also takes on more ’60s elegance with its smooth flowing lines and gloss black paint to match the tank far more generous than the modern incarnations of the Tracker look. The classic theme continues when it comes time to give the rider a place to sit and a Diamond Stitched Solo Seat from the good folks at Biltwell swings off the frame like it was meant to be. The large twin spring rear is a look that goes back to the first days of the motorcycle and with a sheet metal support the rider has a comfy and secure place to sit. Things however are not so accommodating for the pillion, sure it gets the era look right, but the passenger seat perched up on the fender must deliver a bumpy ride…, although in matching diamond stitching it sure does look cool! Up front the look is equally as true to the era and it comes by following the basic rule of keeping it simple, just like the bikes of Nixon and Romero only what is necessary is fitted and that’s not much. The fender has been ditched, so to the instruments and all the indicators and other associated bits of superfluous material. The factory 41mm Kayaba forks remain in place but have been treated to a set of gaiters to keep the mud off the stanchions and a lick of paint on the legs. But the real visual statement comes from the glorious set of truly old school dirt track bars that races used to control their sliding machines with the extra leverage allowing for the finest of rider input. They’ve been fitted up with just the bare essentials, old school black grips, the master cylinder, blacked out levers and two small buttons that are all the bike needs to operate. The digital speedometer has been placed just in front of the tank on the backbone and looks like it was always meant to be. While the ignition switch might have been relocated for a cleaner look one of those two little buttons on the bars fires Foxtrot into life and gets the music going for a hearty round of dirt track dancing. The engine itself was given the usual Anvil mechanical health check before being pieced back together with a full murdered out paint job, new cover bolts for a contrasting finish and drilled sprocket cover for more of the black on metal look. The black ceramic coated exhaust was developed for the bike by Zard a large Italian manufacturer who has added Anvil to their impressive list of partners that includes the likes of Bimota and Ducati for the very best of real world development. To help maintain the classic look of the bike and not give too many hints to casual observers that it’s actually a near new machine all the wiring was hidden as best as possible, an impressive feat given the small tank and the side covers now hiding the fuel pump. To make sure that Foxtrot could do its thing legally on the streets the lighting had to be up to scratch without disturbing the racing feel of the build. “The headlight was replaced with a smaller one from a Harley of the 70’s” it does just the right job and compliments the vintage look of the tail light out back. The foot controls, including the shifter and brake pedal were all sanded to scuff up their surface and give them a feel of some hard days racing on the track, while a set of dirt bike pegs are the perfect choice for the rider’s fancy feet. To finish out the build the spoked wheels with chrome rims have been fitted up with Karoo 3 rubber from Metzeler, a genuine 50/50 tyre that delivers high-speed stability thanks to its unique tread pattern. The final element of the build was designed to impress on the public that racers like Mike Anderson would often take their dirt track machines and ride them on the weekends to get more saddle time and even enter them in Scrambles events. So what says a day out in the forest for a thrash ’60s style like a set of saddle bags. Just like the exhaust another company, Eastpak, chose Anvil to team up with to help them create the perfect item to strap to your machine and pack full of goodies for your days adventure in the saddle, perhaps even squeezing in the supplies for a picnic with a brave girl who grips you and that little pillion seat to find herself by a summer stream in the gorgeous Italian country side. The rockers of Italian custom bikes might be known for their balls to the wall matte black builds, but just this once they’ve added a little gloss, changed the tune and shown they can cut a rug with the best of them.