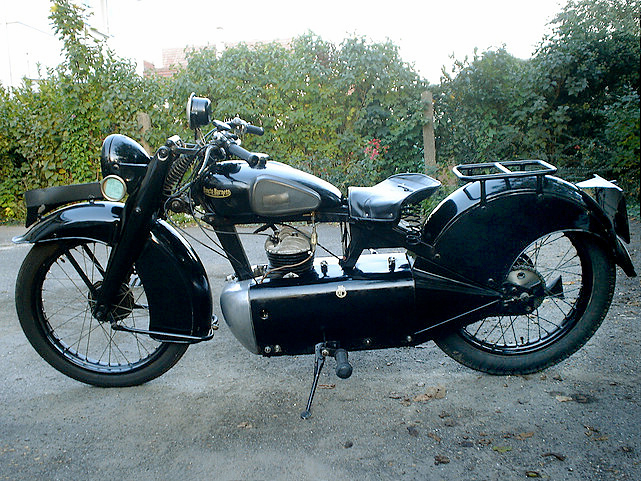 In a moment of google-based wondering last night I did a search for “Heartbeat Motorcycle”. Now our American comrades may not be familiar with this TV series, but most Aussies and Brits will know of the show. Think good-hearted cop show set in a small English village in the 1960s as seen through very rose-coloured glasses – or John Lennon spectacles, as the case may be. The show itself is pretty lame, but it does regularly feature a nice old English motorbike as ridden by the local friendly policeman.

I was fully expecting the results of the search to be something straightforward like a Norton Commando or a Triumph Bonneville. But it wasn’t – the results told me the bike was made by Francis Barnett, an old English motorcycle manufacturer based in Coventry and specialising in frames made from “triangulated straight tubes”. Now call me naive, but I’ve never heard of this company before. So I consulted the Google Images oracle, and was wowed by the results. Being a fan of old faired-engine motorbikes I was impressed to see that their flagship offering in the late 1930s was an incredible-looking 250cc two-stroke single that is noted in the history books as one of the first ever motorbikes to sport an engine fairing, along with some sweet aerodynamic mudguards ala the BMW R7. And is it just me, or does everyone go weak at the knees at the sight of these old black-on-black British bikes?