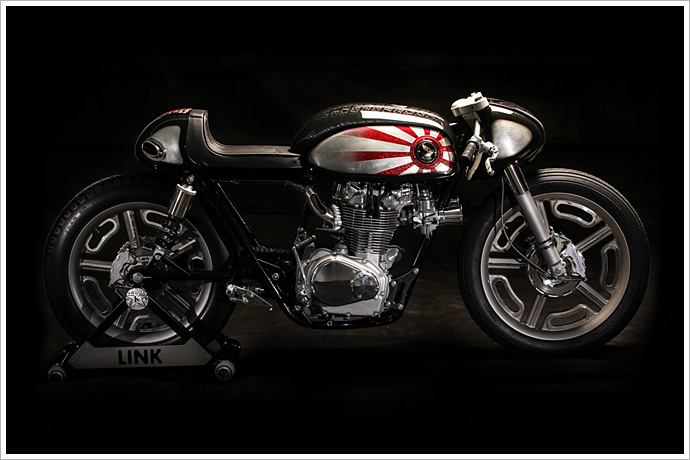 There’s a few names that truly sit on the top shelf of the imaginary custom motorcycle hall of fame in my head. Ian Barry from Falcon is one. John Ryland from Classified is probably another. But in terms of longevity and sheer hard work, few builders can beat the stirling rep created by Belgium’s Fred Krugger and his Krugger Motorcycles. Looking back through his work, he has created some of the most memorable customs of the past 10 years. Bikes that redefined what the words “custom bikes” actually meant. He even created a bike that transforms, for god’s sake. And he took out some pretty impressive awards along the way, including a win at the AMD show in Sturgis by an epic 50 point margin over second place. All these great bikes, but never a café racer. Well, not until now that is… Here’s (the other) Fred Krugger: “This bike is a tribute to a good Japanese friend of mine. It has been built to prove that my heart and my mind really belong to Japan! This is my vision of the legendary ’66 CB 450 ‘Black Bomber,’ one of the first really successful Japanese bikes in Europe!” “Here’s the technical details. I flipped the cylinder head, which took 30 hours of machining to make a new way for the cams chain, drill new way for the oil, modify the cams and adding tunable sproket. An additional air box will be used to increase power and be kind to the engine.” “I drew the wheel, which is a néo-retro version of the famous saltflat Halibrand wheels, and then had them machined by Renegade Wheels in the US. The tires are Avon Speedmasters, with a 19″ front and 18″ rear.” Japan’s rising sun flag. ‘Nippon’ means “Sun Source,” because the Chinese though the sun came from the island when it rose. No, really

“The brakes were custom built for the bike by Beringer, and were specially developed to work on the old school narrow forks.” “I did all the steel work, and that famous Black Bomber tank has be flipped, too. The whole thing was sprayed in metal flake and silver leaf paint by Daddygraph in France. The leather seat is by Wild Hog in Italy. The bike has LED lights both front and back.” “Lastly, the bike is for sale. If you like what you see you can contact me at info@krugger.net for more information. Cheers!”