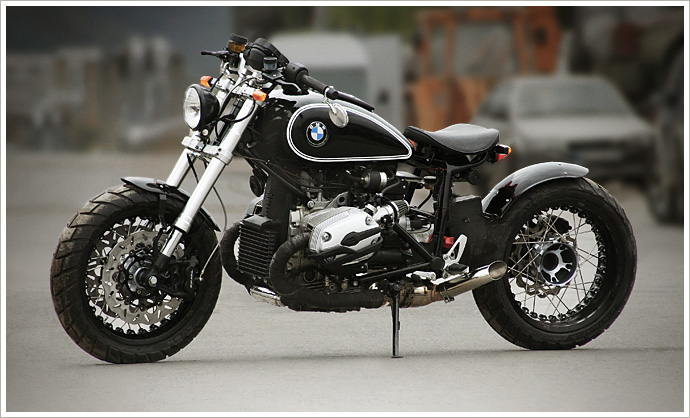 This will be the part where you all will be expecting me to write something witty, clever and creative to introduce this latest bike, yes? A back story, or an interesting fact about BMWs that you didn’t know. Well, I’ve just written about half a dozen of the things and all of them seem like dancing about architecture in the face of a bike like this. I mean just look at the thing. Coolest BMW ever? We are pretty much already there. So, what are you waiting for? Read on! I’ll be right here writing a proper introduction… Here’s Ivaylo Trendafilov, the bike’s designer and owner of Galaxy Customs in Bulgaria. “Our idea was to make a classic motorcycle with a retro look, but for it to be quite modern on the inside. For this purpose we used as a base model a BMW R1200R 2008. We completely redesigned the frame to change the center of gravity and the angle of the front fork. Thus, the motorcycle was lower which in turn improved the appearance and increased both Persistence. We removed the factory tele-lever front suspension and added a classic front fork with adjustment.” “The tank used is off a BMW R71 which has been modified in order to mount the pump harness, and also as a place to keep the majority of electronics. The orignal bars were made more compact while maintaining all of its components, even heating. The air filters from K&N that give a sporty look and change the sound of the engine.” So long, you can ride in two different postcodes at the same time

“The exhaust pipes are reversed, with thermal tape, but in the end we mounted a mini silencer – again for a better sound. The wheels we used are manufactured in Italy by Kineo, who provide special models to BMW and Ducati, and I think they are very interesting.” “To the rim of the Kineo we added some large disc brakes with attractive geometry that seemed to fit perfectly for our project. For tires, we put on some Avon Supermoto Distanzias that are intended for both on and off road which we thought were again a good match. The headlamp is a standard retro unit.” Someone order a truck-load of bitchin’?

“The stop lights are mounted on a stand under the seat. We made use of old ones which have integrated LED lights inside. The seat is made specifically for our project as under it is hidden under the alarm and ignition key. The fenders are made of aluminum, and finally we painted it in the classic BMW motorcycle style of black with white stripes.” (Hat tip to The Bike Shed)