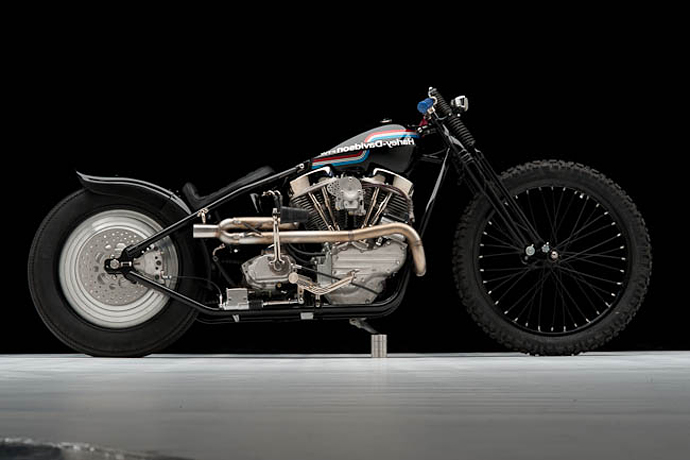 It takes the average man around 30 days to grow a beard. Not a silly hipster stubbly beard, but a fully-blown Unabomber jobby. American Morgan Spurlock gained 11.1 kilos or 24.5 pounds after eating nothing but McDonald’s burgers for 30 days in his 2004 documentary “Super Size Me.” And it takes 30 days to grow a carrot. Um. Ok, so we ran out of more 30 day things, but it also took Garage Company Customs (GCC) just 30 days to build this rad bike named Negro Pantalones – or Black Pants in English. They don’t usually build their bikes in such a hurry but this one was a special case. “We got a letter inviting us to build a bike for the Artistry in Iron Master Builder Championship in Vegas back in March of 2010″ says GCC owner Larry Pierce. “I thought that maybe they had fucked up and sent the invite to the wrong shop but turns out they didn’t. So we were stoked but broke and really didn’t have the cheese to build another shop project at the moment. So we just went about our business hoping to win the Lotto to fund this thing. In the meantime one of our good customers named Randy Dow hit me up on building a new bike. He wanted something vintage-style but with newer components.” To cut a long story short, after Randy agreed to let them build his bike with the intention to enter it into the Artistry, they spent the next 30 days building the bike from the ground up. Starting with a Bare Knuckle Choppers Wishbone Frame, S&S Panhead and a HD Repop Springer fork. Nearly everything else was handmade including the bars, pipes, tanks, air cleaner, tail light, seat and even the foot controls. The stunning paint job was done by Blue Moon Kustoms – and yes, Harley Davidson is on the tank backwards. Sadly, two days before they were supposed to leave for Vegas, Larry got a call saying three of his immediate family members had been killed. “At that point the bike wasn’t finished and I didn’t think I was going to be able to make it in time” says Larry. “Thank-you to Stewie, Nick and everyone else that jumped in and got the bike done when I couldn’t be there so we could make the show.” Unfortunately the bike didn’t win the show but under the circumstances we think they created one sweet ride. Imagine what they could do in 60 days? [You can view more pics and read more about this panhead over at Chop Cult.]