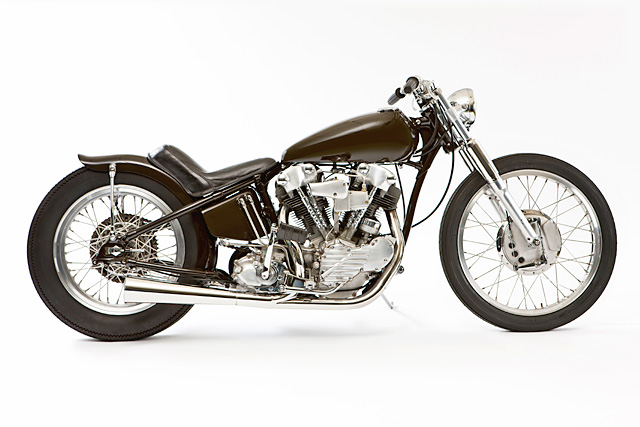 10 years ago, public appreciation was heaped on enormous cruisers that were adorned with novelties and caked in chrome. People loved those things, all 500 kilos of rolling tribute to American ostentatiousness. But as the GFC hit and wallets emptied, tastes shifted and the love of gleaming polish and excess gave way to matte paint, raw steel and clip-ons. Somewhere in between these two extremes sits The Gasbox’s 1944 Harley Davidson Knucklehead. A bike that’s clean, lean and executed with no flourishes except an incredible eye for detail and a masterful understanding of knowing exactly what works. The idea for the bike originated with an old photo that Jesse and Tim at The Gasbox found. It was the best kind of hybrid American drag bike. It had a Knucklehead engine mounted in a 30’s VL Harley frame and it ran British forks at the front. Low, mean and with a powerplant to match they declared that they wanted to build something like that old drag Harley. The concept floated around for a while before they found the perfect starting point, which turned out to be a pile of parts masquerading as a 1944 Knucklehead engine. Purchased from a long-time family friend, the old iron powerplant had been rebuilt using an 80 cubic inch flathead flywheel and heads machined for the larger Shovelhead valves. Raced by local Cleveland legend Tom Kell, the performance-oriented engine would prove to be the perfect spiritual starting point for the new build. But there are other important things to consider when building a bike like this. ‘The one thing I pride myself with on all of our builds is the proportions,’ the guys from The Gasbox say. ‘Having the correct stance and overall line of the bike is crucial. For us it all starts with the frame and fork combination.’ To that end the engine was mated to a stretched VL frame that had its rake kicked out to improve handling. It runs aluminium hoops with an 18” rear and 21” front mounted to Norton Roadholder forks. The front drum is part Norton and part BSA. Most of the other features of the bike were fabricated by The Gasbox. That’s the oil tank, the rear fender that hugs the tyre just perfectly and the 2 into 1 exhaust that makes it way neatly around the frame and the side of the engine. The fuel tank was modified to take an old Smith’s speedometer, which keeps the front end of the bike clean. A headlight sits up there. And that’s it. At first glance there’s not much about this ’44 Harley which stands out. It’s only when your eyes adjust and you start to realize how well-crafted and clean everything is that it really becomes special. It’s got no badges, no stickers, no airbrushing or pinstriping. It’s just a beautiful motorcycle beautifully put together. I’m beginning to think that The Gasbox, with a multitude of amazing build under their belts, really know what they’re doing. Amongst other triumphs, their hospital-grade-of-clean BMW R80 placed third in Pipeburn’s Bike of the Year in 2014 and their 1950 Norton Dominator just took out second place at the Quail motorcycle gathering last week. But to my eyes it’s this Knucklehead which straddles the line between heritage and modern minimalism perfectly.