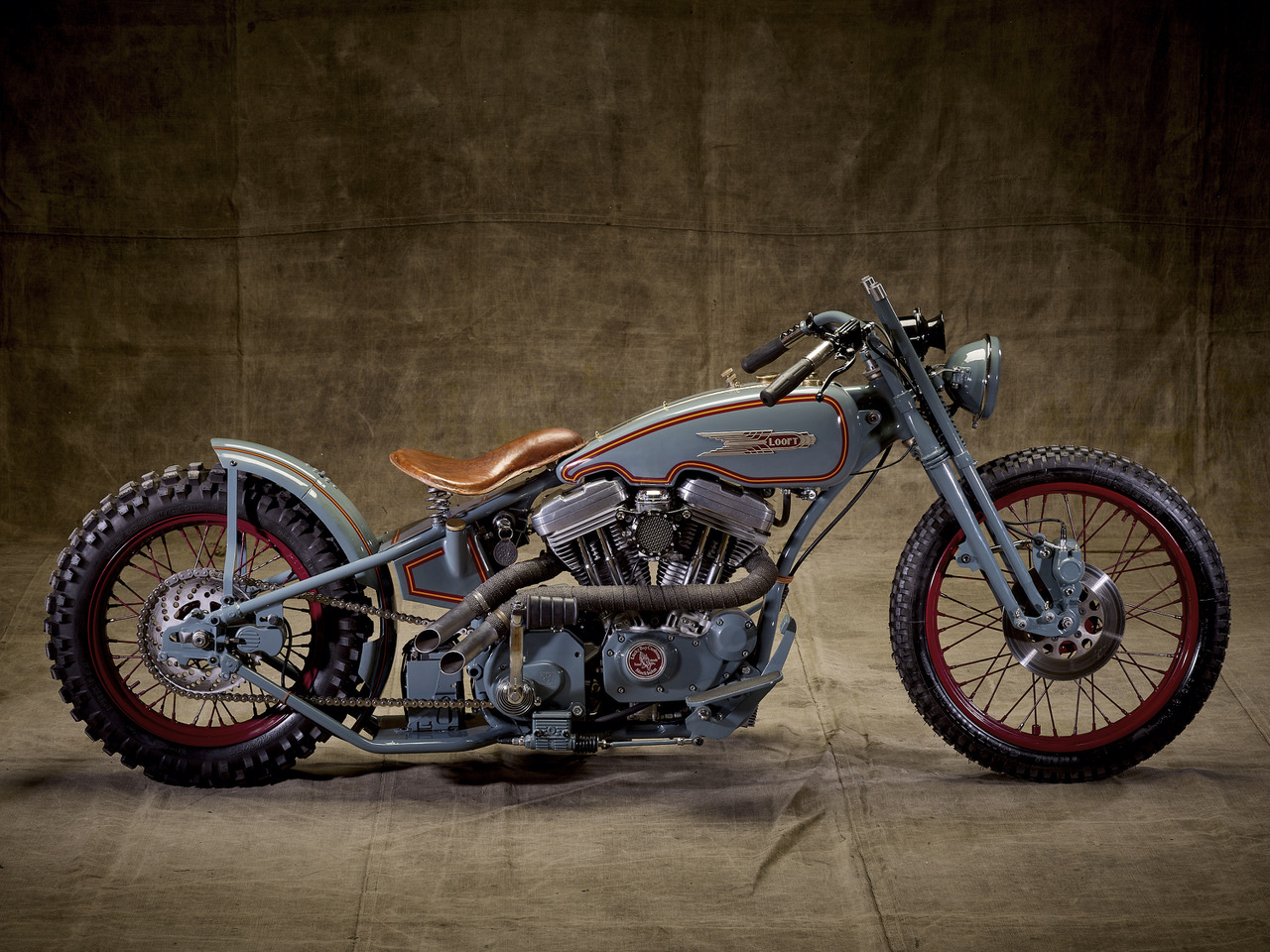 It doesn’t matter the state of the world or the conditions in which we find ourselves, put together two riders and their steeds and they’ll find a way to race. It’s as much about pride as it is the competition and with your motorcycle being the extension of yourself, winning becomes personal. So as the world crept towards the great depression and board track racing declined, a new outlet was found for the American speed freak. Hill climb racing required very little infrastructure but that didn’t stop even the biggest factory teams from getting involved. Inspired by this spirit, Swede Loen Montefusco was determined to craft a machine befitting the Kings of the Hill ethos. And from his Lucky Boy Customs workshop in Stockholm, he’s done just that with a Harley vintage racer with looks for show and the attitude for the streets.

The races up dirt packed hills across America and the machines that sought to conquer them are now all but lost to history. Nearly a hundred years have past and only a few small collections in museums and personal hands remain. But the internet allowed Loen to travel back in time and from the still pictures to the silent movies of the racing itself, the inspiration began to build in his brain. “Creating this sort of machine in my mind takes up a lot of space in my head, so it needed to come out into the 3D reality in which we live. The day finally came when I actually got the chance to create this sort of ‘gentle monster’ from an era long gone.”

But living in Sweden you can forget about finding parts from the ’20s and ’30s, well priced spares for a Harley-Davidson even twenty years old can be hard to come by. But with HD taking victory in the 1929, 1930, and 1931 National Hillclimb Championships, it had to be Milwaukee muscle. So Loen would have to create his vintage machine with what he could get his hands on, the rest he would custom make, rework and repurpose. With every monster needing a beating heart he started the whole project with just an 883 engine from a 2002 sporty. But the small capacity wouldn’t suffice, so it’s been bumped up to 1200cc with a full engine build.

Making sure you hear him long before you see him, Loen took no prisoners with the exhaust, the slash cut pipes spitting thunder that would drown out Thor’s own chariot. The hotted-up carb feeds the extra fuel required and takes its air via a machined velocity stack. But it’s the start procedure that gives this bike the true vintage touch. “I decided that a kickstart was required for a total retro transformation,” Loen explains. Piecing together all the parts he would need as he scoured the country for the primary, clutch, and gearbox. All pieced together and “the kick was ready to shred someone’s leg off. It’s quite heavy to kick a 1200cc engine that wasn’t built for a kickstarter but it’s not impossible!”

Now he had to find a frame to call the engine home and with no chance of finding a classic original in Sweden he did the next best thing, make a new one that would fit the dual purpose of the bike. “I wanted the old school single front tube, low and long frame. A hillclimber that is meant to ride on the streets of Stockholm but with the cool stance of an old machine, for the hills back in the day.” The hardtail rear was stretched and widened that gives the look and the length of wheelbase needed to go up near vertical hills. The backbone was heavily modified to accept the new tank that was planned and allow it to sit low.

For the bodywork, Loen started in the middle on the oil tank, “So me and Kalle, a buddy that worked on this project with me as part of a ‘How to Learn to Build a Motorcycle’ course, started to mock up the oil tank out of some cardboard to see which design would fit best. I wanted to break the lines but still have a classic look but with a modern touch.” The extra room created by the stretch allowed for the oil tank to go in and to relocate the ignition to the other side of the centre post. The fuel tank itself is simply a work of art, from the brass strap and fittings that include a plunger, right through to the engine hugging lines, the period-correct look is done to perfection.

When it came to the front end, this was a piece where Loen would not accept second best and the vintage forks are straight from the pre-war era. But with everything mocked up and parts used from a range of bikes, the throttle twisted forward not back; not good! “So instead of ordering the whole right hand grip from ‘36-’48, which did not match the older handlebars because it will end up 1 ” shorter, my friend Andres decided to build the spiral grip by hand!! Yes, by hand! Removing it from the grip, mirroring it and building it again so it rolls backward like modern bikes do.” Kitted out with old school grips and matched to modern switches and master cylinder, its form, and function at its best.

The paintwork is a thing of beauty, with almost the entire bike covered in the primary colour choice, with the accents of gold and maroon laid down across the build. Reminiscent of the factory-backed efforts the looks of the race bikes of the time were as important as the performance in securing sales to the general public. Soaking up some of the bumps the sprung leather seat was given a little extra padding to complement the vintage look. But there is no compromise when it comes to the rubber! “The wheels are wrapped in off-road tires to give it the badass look. Not the most comfortable, but who cares?” Loen says with a big smile! Which is what his vintage hillclimb racer is all about, and overload of excess that gives the sort of fun they enjoyed more than a 100 years ago.