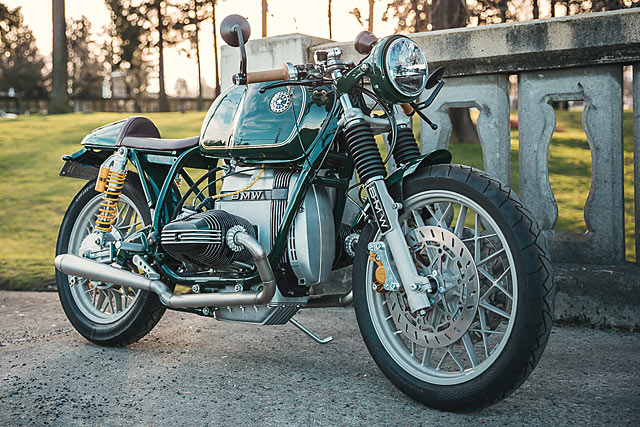 The more you ride and the more bikes you own, the more you realise that pretty much every bike is a compromise. If it goes fast, chances are it’ll be uncomfortable. If it’s great on the highway, it’ll suck on the twisties. And if it’s old, it’ll be totally unreliable. But the beauty of bike customising is that you don’t have to blindly take what you’re given. On the contrary, you can pretty much have it all. Which is just what the Boxer Metal client who now owns this ‘Weiss & Grun’ BMW 1982 R100T asked for. You name it, this cafe can pretty much do it. “I am thinking about retiring in the next few years,” said the client ‘R.W.’ With a steely  resolve that only years of custom service experience will gib you, Chris from the Californian custom shop listened intently. “As well as doing motorcycle tours around the world,” he said, “I also want to have a bike I can tour through New England and the surrounding  area.” So far so good, Yes? Well, not quite. “I don’t want a new bike and I don’t want an old bike,” he said somewhat cryptically. “I want something built just for me.” Chris took a deep breath, but before he could say a word R.W. piped up again.

“I like cafe racers, but I also like to have luggage. How can we do that? Detail in a bike build is very important to me. That bolt, that bracket, that seat, and the overall look and feel has to be perfect.” While most shop owners would be calling 911 right about now, Chris listened on. “Any other requirements?” Chris said, rhetorically. “Yes. I am quite short.” said R.W. And that was it. The world’s most difficult design brief? We’d put money on it. But for Bec and Chris, the partners and owners behind Boxer Metal, it was just another bike building challenge – albeit a doozy. After days of thinking, they delivered the answer to R.W. “We will build you a vintage BMW with modern brakes, modern shocks, more horsepower, a custom frame, custom tank, and seat to fit your needs. Oh, and you’ll be able to carry luggage, too.” Impossible? We thought so, and we were wrong. So then the talking stopped and the hammer dropped. After a tear down, Chris began by narrowing the bike’s frame and building a custom rear hoop to suit the bike’s newfound svelteness. And of course, a narrow frame also means a narrow(er) tank. So he got a-grinding, and while he was elbow-deep in it, he added a flip-style gas cap which really lifts the tank’s overall look. Which is all good and well, but I bet you’re all wondering about the luggage, yes? “We solved that challenge with two different custom seats,” says Bec. “There’s one for touring and one for pushing the ton; both of them are equipped with quick release saddle bag mounts for Wolfman Enduro bags. There’s enough room for a change of clothes, a few bottles of wine and a nice cigar or two.”

The bikes rims are the stock BMW units, but with a  fresh coat of powder. And stopping them is a Boxer Metal big brake kit in the front and a refresh stock brake caliber out back. Which just so happen to be the same place where the new twin Ohlins shocks were installed. Their partners at the pointy end are a pair of Boxer Metal fork springs. Gas removal is handled by a stainless steel 2-into-2 system that was designed by Boxer Metal and then built by Arite Cathcart of TCB Fabrication. The amazing British Racing Green paint was laid down by locals ‘Ryan the Painter’ and Todd Pearson. The finish is so good, it really makes you wonder why they don’t pass a law to make all bikes this colour.

Germany’s Motogadget was chosen to handle the electrics; most noticeably with the m.switch unit mounted to the bike’s clip-on ‘bars. Alongside is an Acewell speedo. The bike’s lighting is now 100% LED powered with the electrons supplied by a Euro Moto Electrical set-up.

And so the bike was done. If you’re anything like us, the thought of a client reeling off a shopping list of obtuse requirements would have sent shivers up your spine, but not for Bec and Chris. “Both the customer and Chris are very detail-oriented,” she says. “Every piece of hardware, every part, every bracket, every wire was touched, massaged and lovingly placed to create the ultimate BMW touring cafe racer. The client wanted it this way, and Chris wouldn’t have it any other way.” Nice.