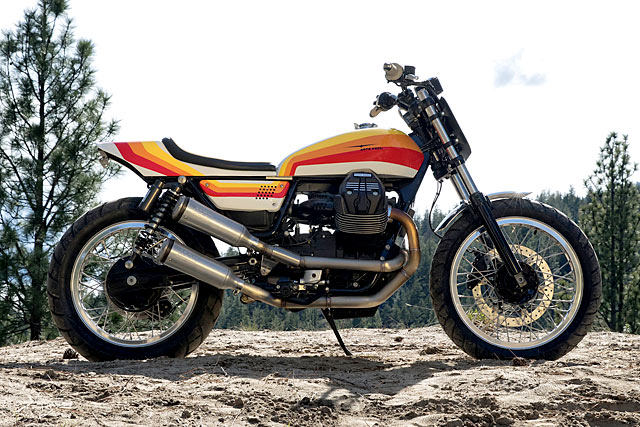 There are plenty of ways to get addicted to speed and the two-wheeled variety sinks its hooks in hard. But when your first day at the local flat track involves getting thrown the keys to one of the world’s greatest builders own personal thrill machines you never had a chance. That’s exactly what happened to Brent Giesbrecht of MotoVida Cycle in Kelowna, Canada; when AMD winning superstar Roger Goldammer sent Brent out on his tricked out YZ400. Now a Moto Guzzi dealer Brent decided it was time to take a life’s worth of inspiration and pack it all into one sideways sensation, a 2017 Moto Guzzi V9 Flat Track bullet. MotoVida is more than just another bike shop, it’s a place that brings together a community, while also stocking bikes old and new, as well as turning out killer customs. For Brent it’s about creating space for riders and non-bikers alike to hang out, “We like to support local artists as well and have a constant rotation moving though our shop at any given time we also have monthly moto meet ups, fairly regular parties, art shows, house concerts, movie nights and even one wedding.” Having taken on the Moto Guzzi brand 18 months ago and adding Aprilia more recently, starting with a brand new bike was the chance to display the full range of what MotoVida can offer. “The Guzzi was built for a few reasons, one was to show what could be done on the V9 chassis both to customers and to the Moto Guzzi company itself – design wise (tracker theme) came from my recent love of racing flat track and just how much fun a tracker style bike is to ride.” The body work creates the most meaningful visual transformation into a tracker with Tyler Sezler hand hammering each piece from steel. The tank has arrow straight lines with the sides notched to create reliefs for the cylinder heads so it can sit as low as possible on the back bone. The tail section and seat base is more of Tyler’s handy work, with some of the inner plastic retained to keep dirt off the engine. The enormous factory rear guard is ditched while the front swings a raw steel item, bobbed and affixed with the stock supports. Drawing inspiration from his childhood and the glory days of flat track racing Brent had ideas swirling in his mind for the colour scheme. “Paint design is a throwback to the Ford Econoline sport van from the mid-70s; I also had the Sesame Street pinball game video going through my mind for some time.” Matty Paziuk has done an incredible job laying down the paint while Dan’s Place Custom Interiors got to work on the seat. The style for which comes straight from another fond memory of Brent’s, the interior of his big brother’s ‘67 Camaro. Given the V9 Roamer starts life as a laid back, almost cruiser style machine, the position of the controls were not at all suited to fast action in the dirt. To get the feet in the right position the foot controls were cut off the lower cradle and re-positioned some six inches further back. While up on the risers a set of tracker bars and grips get the hands in just the right position. To keep things street legal the front number board has twin LED headlights poking through and the bar ends support Rizoma indicators. If you look at the horsepower figure of the V9 you’ve missed the point, this is a torque monster and that makes a greater tracker! With the 853cc twin making peak pulling power at just 3000rpm, it’ll haul out of a corner in any gear and is always happy to wave its tail feather. But to add some extra ponies and give it a flat track bark Brent turned to a legend. Mr Goldammer himself fabricated the stunning stainless steel single sided pipes that finish out in a set of SuperTrapp’s, all in a day’s work for the world concurring builder. Suspension is crucial on any tracker and thankfully Guzzi got the front forks just right, perfectly compliant through the full stroke of travel. Brent simply lowered them 1 inch through the trees, but it was out back where the big money went. A set of fully adjustable BiTubo twin shocks are designed especially for the Guzzi and keep the rear end planted with easy changes just a click away. Keeping things road legal the front brake remains, but being a big drilled disc with Brembo caliper that’s no bad thing at all. The factory V9 Roamer comes with a set of multi spoke alloy wheels and they don’t look half bad, but spokes is where it’s at on such a steed. The conversion is not straight forward being a shaft drive motorcycle as Brent explains, “getting the rear wheel offset correct required the making of a male to female spacer that would mate with the cush drive on one side and the drive hub on the other.” The hubs themselves are mid ’90s California pieces laced to an 18 inch rear and 19 inch front, all wrapped up in Avon Trailrider rubber. So what’s the big Guzzi come flat track slingshot like when you twist the throttle, “the bike sounds wicked cool and is a total blast to ride – especially when you disable the ABS and traction control,” smiles a thrilled Brent. All of which comes with a little extra piece of mind as the V9 retains its two-year factory warranty from Moto Guzzi. What more can you ask for than a bike shop that will build you an incredible machine, give you a great place to hang out and maybe yours will be the next wedding they host; especially if the bride is another flat track terror.