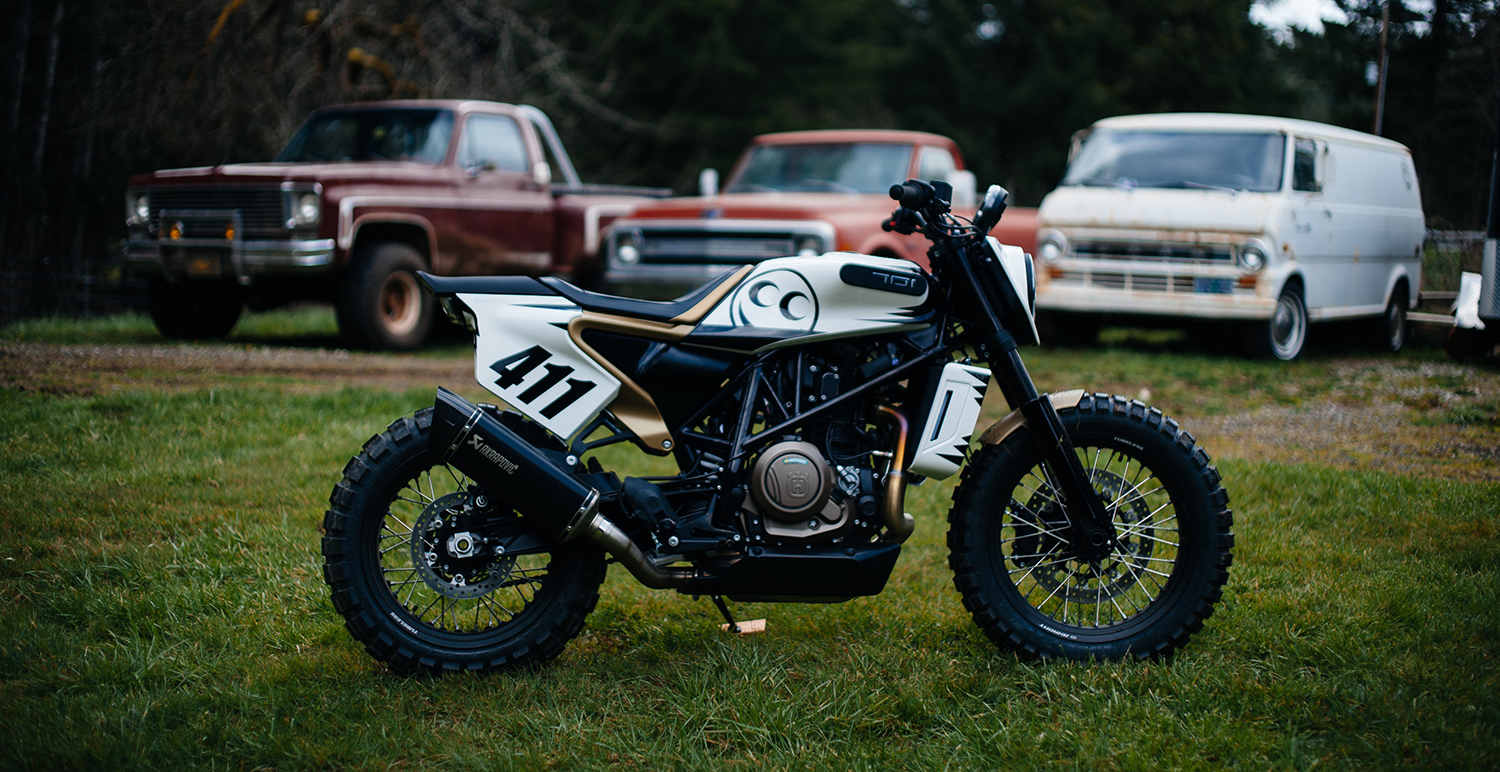 There’s something extra special about starting with a pile of crap and building it into a prized possession. It’s this understated story that once there was nothing, or little to nothing and now there is something. An idea that the object was saved from trenches, resurrected and admired. This idea of rebirth is something I believe in, but am not beholden to. We all see a lot of custom builders starting builds with inexpensive, easy to find motorcycles, pouring their life savings into them only to have a better version of the same thing. I want to be clear, I LOVE this idea, and I’m not dogging it in any way. I just want to point it out so that I can explain why it was really hard to customize a 2019 Husqvarna Svartpilen – aka Black Arrow.

Think of it this way… when poor styling and bad performance gives you quite a bit of workspace to build something far superior, modern styling with attention to detail coupled with factory delivered performance leaves quite a lot less to work with. A random example: think of the Lamborghini Countach. The factory left little room to make them sexier, whereas the Honda CX500 was a machine that could fall apart and look far better with a touch than the factory built it.

That said, with just under 30 days to our annual One Motorcycle Show and a budget of limited resources, I was put to the task of making a great looking factory bike (The Husky Svartpilen) into something with a little more pizazz. The first thing to go was all regulatory add ons, i.e… licence plate holder, massive winkers, added farkle, buddy pegs and the likes. The standard on all factory roll outs.

From there, a nice new paint job was added with my race #’s 411 painted to mark my territory. Cool thing about the design of this bike is that all the painted surfaces are just covers for the vitals. You can remove them with ease, paint them and replace the parts individually if you run into a bit of bad luck. Akrapovic Exhaust makes a nice factory looking slip-on to replace the very quiet stock system. Not sure if it adds any punch but sounds better and drops some weight. This requires a special bracket, but cleans up the rear end real nice.

The licence plate holder and rear winkers are huge! Fortunately they bolt on, but you’ll have to buy a 690 axle spacer block and axle nut. Admittedly I still need to fab up a tail tidy so I can mount my new mini blinkers from Rizoma. The rear subframe is silver from the factory, I thought it would look nice in gold, well because, you know gold is gold!

To match this gold I had Ginger at Newchurch Moto whip a new seat cover with some gold side stripes to complete the clean line of the gold subframe. The front end was pretty easy. The Rizoma blinkers bolt right on and plug right in. The aftermarket shorty front fender was unnecessary but added a bit of room to add more gold , so that was done up.

The stock handlebars are fine but I like the feel of MX bars so I switched ‘em out for the CR-hi bend Protapers. A few small bolt on engine mods to get rid of the evap and trick the computer to remove the traction control so I can skid and wheelie, was provided by Rottweiler Performance.

Lastly, finding an aggressive set of tires proved a little bit hard but Shinko makes a great Adventure Trail 150/70 17” rear and a 120/90 18” that just barely fits under the front fender.

So there you have it, the bike is now custom built and looks every bit the part. Something you can do with a borrowed tool set and still keep the factory warranty. Maybe in a few years when I destroy the bike I’ll do more, but for now it does everything I want it too.