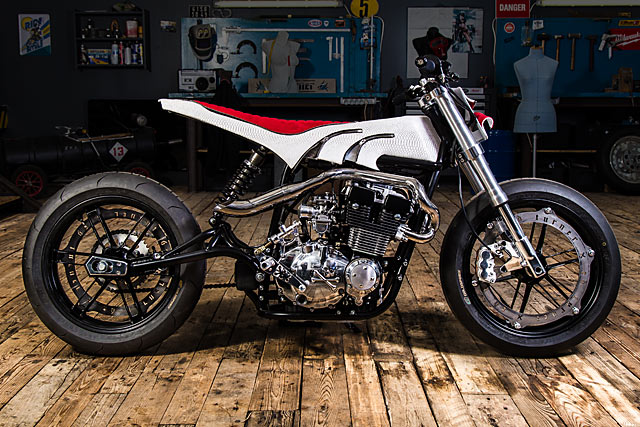 Today we’ve got the second half of a matched pair of air-cooled Suzuki’s by French workshop Ed Turner. While the previous custom was a bare knuckled, stripped back brute of a GSX1100 for a gentleman client, this is the more feminine half the duo destined for his partner. It’s a little 80’s Suzuki GSX400 dubbed the ‘GS-XX’. Dressed in faux-alligator leather and upholstered to resemble a high-class evening shoe, this highly polished tribute to rolling Eurotrash sensibilities is guaranteed to start some conversations. [superquote]“Karl states that the red velvet opening for a seat is reminiscent of a shoe. Sure. A SHOE.”[/superquote] It was also trickiest part of the build to get right, with Ed Turner’s owner Karl Renoult having to draw several patterns to get it mounted just right. But he relished the chance to mix things up. “I was happy to work for a woman for once,” Karl says. “For once it allowed me to try a new design.” Karl states that the red velvet opening for a seat is reminiscent of a shoe. Sure. A ‘shoe’.

I can’t be the only one seeing something else in that seat design, can I? The ‘hers’ part of the ‘his and hers’ collection is not just aesthetics either. The Suzuki GS-XX runs Buell front rims on both ends of the motorcycle. Modifying the rear to take a sprocket required a lot of time and machining to get working properly it’s one of the little things that make this bike so amazing. The engine itself was overhauled and refinished to match the rest of the bike, with badges, patches and stitching on the side of the engine cover. Other details scattered throughout the bike include a zip-up headlight cover, a top triple clamp machined with the customer’s name, subtle leather stitchings and miles and miles of polished metal, all pressed and bent and beaten to perfection. Karl has managed to knock the second part of this twin Suzuki build right out of the park. The concept and execution are unlike anything I’ve ever seen before, and I’m equal parts scared and impressed by a client base that has let him put their personal taste on show. Thankfully, it’s not the last bike of it’s type we’ll see from Karl – the customers are so happy with their rides they’re discussing getting a third bike made.

I’ll be curious to see what Ed Turner whips up for them next.