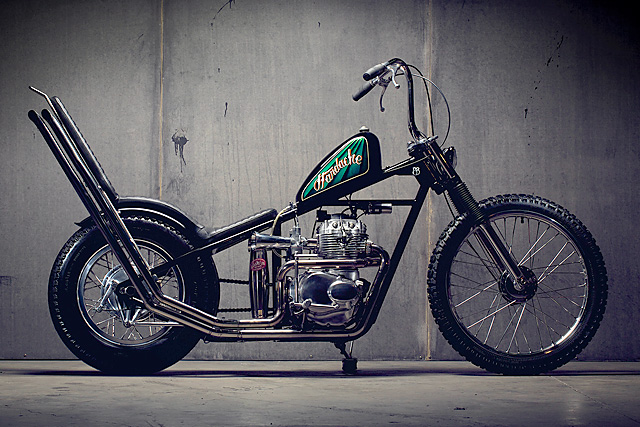 During our recent Melbourne sojourn to ride Triumph’s new Bonneville, we caught up with Geoff and Luke from arguably Australia’s best custom bike magazine – Tank Moto. After a few beers (OK – it was 8 beers) they told us they had a story we might like to share. We checked it out and were suitably impressed. So here’s Justin Holmes from Queensland’s Popbang Classics and his ridiculously cool ‘Hardache’ ‘74 Honda CB360 in his own words. This little chop has had a pretty tough life. It all started late one night when I got a phone call from a young guy named Kris claiming to know a fella who used to work for me at a previous job. I wasn’t much of a fan of said ‘fella’, so I didn’t know what to expect. He asked me if I could finish his wiring off and help get his bike running and sent me some pictures so I could get an idea of what I was getting myself in to. When he brought it down to my workshop It wasn’t much of a bike. He’d bought it a while back as a complete, running hard-tailed CB400f which he’s stripped down and swapped the four pot out for the ’74 CB360 twin. The frame was sandblasted and looked like a clogged-up spaghetti strainer. He had someone ‘repair’ it, but it was still pretty wild. I straight up told him that I wouldn’t work on it until the frame was sorted, as it was clearly a death trap. So it sat around the shop while a plan of attack was being made and some funds were gathered. In this time Kris and I became mates and spent a lot of time drinking beer together, staring at his bike and trying to skateboard. We decided to keep the bikes original front end, his CB360 motor, the fuel tank and the rear hub. The rest of it got scrapped. I had to then cut the frame in half to get the motor out. It had been welded around the engine and was using the weak Honda cases as a stressed member. We then went about choosing a new wheel combo. Up front we used a 23″ Honda XL500 rim laced to a postie bike hub and the rear is an aftermarket mud catcher laced to the CB750 hub that was already on it. For rubber we went with Avon Speedmaster MKII. I drew the new frame up in Autocad using the front end and tyre combo to get all the lines right. Then I set my jig up and made the frame out of chromoly. It weighs about half as much as the previous one and is about 100 times stronger. The bikes tank had been painted and pinstriped by Kjell (VonPatto) Patterson, and Kris was very attached to it, but I wanted to frisco the tank so it sat better on the frame. I had to lower the tunnel, change the cap location and move the fuel tap without damaging the ‘Hardache’ panels Kjell had painted on the sides. It was one hell of a mission, but I managed to pull it off. Kjell then did another round of pinstriping on the top of the tank once I’d redone the black. The bike was then put on hold again for a while I finished off some other projects. Before we knew it the 2014 Dirty Love Show was coming up fast and we decided to go hard and get it done so it could make an appearance at the show. I still had to fabricate everything else and paint the rest of it and we only had 3 weeks. I wanted everything to flow from the bars to the top of the tank and the front end to the sissy bar and pipes. Everything had to be right or I wasn’t going to be satisfied. First up I made the sissy bar by hand out of stainless round bar. Then I made the seat pan to suit and the guys at Hotel and Club decor in Burleigh trimmed it to our spec with about a 2 day turn around. Because of the stretch in the frame we decided to run a chain tensioner. I don’t like buying off the shelf too often and we couldn’t afford to wait for one to come from the U.S so I made one up out of a valve spring and a skate board wheel. I ended up buying a pack of four skateboard wheels so not wanting to waste the remaining 3, I turned them into the bikes taillights. I made a silicone mould off a bearing and nut, and cast them in candy red resin to make the lenses before pressing them into the wheels with some LEDs wired in to make it all work. You can even see the bearing numbers on the lenses if you look close enough. Next all the electrics were hidden away in the faux oil tank under the seat, which is actually made out of two stainless vacuum flasks. It runs an updated reg/rec and an Antigravity 4 cell battery to power the lights and coils, which are Lucas style to give it the old British look. We also opted for the twin Wassell 626 carbs to keep the British theme going (It’s amazing how many people say “Sweet Triumph!”). I made the custom manifolds out of stainless tube and plate, and hand turned the oversized velocity stacks out of solid alloy round bar. They took about 5 hours each side and run internal filters to keep the motor clean inside, these are my personal favourite parts on the bike.

The pipes were made out of stainless 1.5″ tube to follow the lines of the bike. The bars were bent up out of stainless 7/8″ tube with a little accent I turned up was welded in between them as bracing. An internal factory Honda throttle assembly and Amal style levers with a flush mounted kill switch and Cole Foster grips were then added to finish them off. We were definitely getting close to dead line by now and Kris recruited a mate to come and help polish all the stainless (Bundy, you’re a life saver!) In the week before the show Kris and I were at the shop for at least 90 hours and needless to say our partners weren’t impressed. The fork legs were turned down on the lathe and modified to hold the ‘postie’ drum hub. The little 3 step machined features you can be seen on the bike, including the velocity stacks, fuel cap, fork legs, starter block off, and peg ends were all manually machined in my shop. The pegs were all hand-made out of stainless and alloy and even the kick starter is hand-made.

About 2 nights before the show I thought I should probably paint the frame and rear guard in 2 pack black. While that was drying I pulled the motor down to bare cases, completely blasted it, lapped the valves, honed the bores, installed new rings, polished the side cases and fins, reassembled it and had it sealed and ready to slot back into the dry frame the next night. On the evening before the show at around 7:30pm we finally had it all back together. We loaded it into the back of the ute with a trailer and four other bikes and headed up to the Dirty Love pre party. We didn’t even get to appreciate what we’d pulled off until setup the next day. Seeing it in the sunlight was just awesome. And seeing everyone’s reactions was even better. It wasn’t until about 2 weeks after Dirty Love that it was completely up and running and the kinks ironed out. It definitely got a good work out and could do a pretty mean skid for a little Honda twin with a massive rear tyre. Now it cruises nicely on the highway and is super fun to ride. Back in May, Kris got married and I ended up being his best man. The bike sat front and centre at the end of the isle surrounded by sweet old cars out in Tambourine. It was great to be part of a project that had so much personal attachment in it and to be able to create something out of such a small handful of parts. Like what you see? Then check out a whole heap of similarly bitchin’ bikes in the latest issue of Tank Moto.