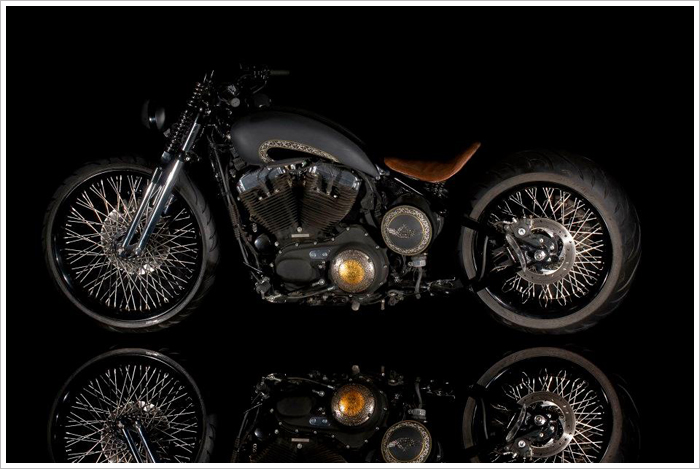 When it comes to custom bike builders in India there’s only one that immediately springs to mind. This is the fourth bike we have featured from the guys at Rajputana Customs and they have all been unique in one way or the other. The previous three builds were all built using Royal Enfields as the donor bike, but this time they have chosen something beefier – some good ol’ American Iron. This 48 Sportster has a level of craftsmanship and inlay work that you would usually only find on ancient Indian artifacts or Hindu temples. We understand this style won’t be to everyones taste, but that’s ok, because the locals from Mumbai to Delhi are drooling all over this thing. This 1200cc Harley has been named after the late Indian Princess called “Rajmata” – who was once listed as one of ‘The Ten Most Beautiful Women of the World’ “Rajmata” because the word translates as “queen mother,” the Harley being the mother of all bikes they’ve turned out thus far. Vijay from Rajputana says the bike “has a deep-seated Indian art and craft aesthetic which is brought to light by the Koftgari sword work on the clutch cover, Jawaja leather work on the seat, and Silver/Gold inlay work on the gas/oil caps”. The miniature painting has been done by the artist Nandu Ji. He has detailed the gas and oil tanks beautifully. Other standout features include the custom pipes and the front modified springer. It’s because of impressive builds like this that Rajputana Customs are gaining a huge fan base in India. We actually know first hand how big their fan base is because we receive a lot of emails from Indians wanting us to give them Rajputana’s email address. Sometimes they even think we are Rajputana and want us to build a bike for them. Here’s one email which was too good not to share: “Hi i am mahendra from india. i want you to design a chopper for me. i will give you the design , you must also have seen it in ghost rider movie , when nicholas cage rides a bike before turning into ghost rider. i need it the exact it is, just the engine will be change, it should be royal enfield built 350 cc engine. what would the estimated cost in indian rupees. waiting for ur rply”. Just for the record, if you want a bike built by Rajputana then you can email them here.

If you’re interested in seeing the previous builds by Rajputana then you can check them out here, here and here.