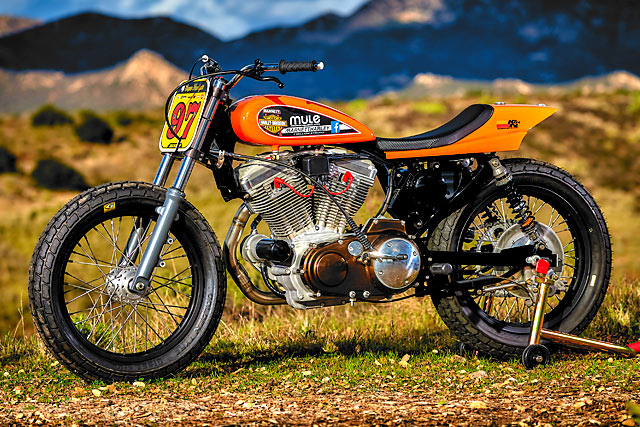 Custom bikes can come from almost anywhere. Brand new factory bikes or clapped-out junkers. Crash victims or botched restorations. Now these are all good and well, but there’s one type of donor bike that always brings a smile to our faces, and that’s the parts bin specials. Conjured out of thin air, they are the moto equivalent of making babies. You start with nothing and you end up with a miracle. The only issue is, they aren’t exactly street legal. Which is why this spares Harley tracker from California’s Mule Motorcycles is headed straight for the track – just as soon as it’s not illegal there, too. Mule’s Richard Pollock says he stopped counting custom bike builds at about 200. Needless to say, after your skills are honed that much, you begin innovating whether you like it or not. “I made a seat out of Balsa wood for a Cycle World project a while ago. All my friends thought it was a really stupid idea. Funny how many wooden seats you see installed by the current crop of motorcycle builders, yeah? How you like me now?”

Built to run in the 2018 Super Hooligan class of Roland Sands’ popular race series, under normal circumstances it would have been a Harley street tracker but Richard’s devious brain and fidgeting hands had other ideas. “The frame is an eBay special ’95 stock Sportster unit with a salvage motor. Everything else was built up from scratch with used parts. I call it ‘Mearl’s Hooligan.’ “ “Originally, I was building a Hooligan Racer for myself. After making so many trackers, I knew exactly what to do. Plus I’d finally get a chance to leave all that street stuff off! Having raced flat track off and on since 1996 on bikes where I would strive to make the machine lighter, my goal here was to chop weight.” Then part way into the Harley build, serendipity reared its beautiful head. “I was approached by a friend who wanted to do the whole Hooligan series. I knew he was fast as I had competed against many times in the past. And he had money! So instead of being a race bike for me, it became a race bike for him – aka Mearl Barnett – an ex-pro racer from central California.” The first thing Richard did was to buy the frame off eBay. Loading it into his truck reminded him of just how heavy a stock Harley Sportster frame really was. “It’s 47 lbs stripped down to nothing. No swingarm, no hardware, no bearings. I cut all the non-essentials off and called the Roland Sands shop to ask if I could remove the cradle under the engine. ‘No problem,’ was the response.” Richard says he was told that you just can’t change the head angle and you have to use the stock upper shock mounts. Easy peasy, yeah?

[superquote]“I cut all the non-essentials off and called the Roland Sands shop to ask if I could remove the cradle under the engine. ‘No problem,’ was the response.”[/superquote]

“So I removed the cradle and when I was done trimming the fluff and adding the brackets, 17 lbs had been put into the dumpster. From there I added an unused C&J swingarm from a previous build along with some lightweight flat track wheels, an aluminum XR-style fuel tank, a First Klass Glass XR seat, Saddlemen seat pad and a pair of Racetech shocks custom-made for the intended application. Up front I found a used set of 41mm billet DT clamps and had Racetech go through a set of Triumph Bonneville forks.” Black powder coat made it shine; it was also applied to a discrete yet heavily modified Moon oil tank. On the engine, the primary cover has been modified to rotate the clutch cable attachment point 90 degrees clockwise to keep the cable out of the dirt. But what about the Harley’s internals, I hear you ask? “All internal engine modifications current and pending are classified,” says Richard, bluntly. Ok then. Sheesh. “The bike wasn’t ready for the opening race in Portland a few weeks back, but it was brought to our attention, that the engine cradle could not be removed after all.” So the non-street legal bike was now also illegal on the track, too. What a badass. “As we speak, a new frame is being built,” says Richard. He adds that the exhaust, footpeg brackets, controls, wiring, plumbing and fab was all done right there at Mule Motorcycles with expert help from mates Sal Peluso and Shawn Kump. And Superbike Paint applied the beautiful orange glow to the bodywork. But the illegal frame blow was soon countered with much better news. “Mark Barnett (no relation to Mearl) from Barnett’s Harley Davidson, the world’s largest Harley dealer, came on board to help.” Mark apparently has a long history in flat track. His steel shoe has since been retired, but it still has pride of place in his office. “Although it’s technically not finished yet, probably my favourite part of the tracker is its weight, or lack thereof. Also, the exhaust came out really nice.” You took the words right out of our mouth. And just look at those welds. We suppose that’s what you get when you’ve had 200+ previous sets of pipes to practice on.