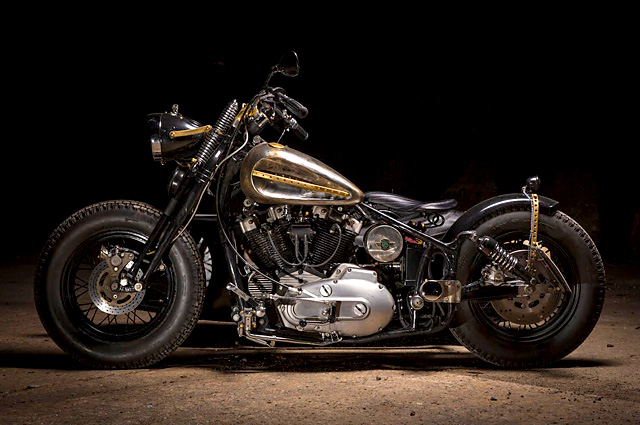 Peanut butter and jelly. Vegemite and avocado. Pickled eggs and beer. In the culinary world there’s a few combinations that, at first glance, just shouldn’t work at all. And yet if you can manage to cross the chasm of logic and walk free in the land of adventurous eating, you’ll find that sometimes gut instincts and leaps of faith work a whole lot better than common sense. It’s the same instincts that Richard, from Berlin’s Metric Customs, used when he decided that there was no good reason why a Harley engine and a Dnepr bike couldn’t work together. Just like Reagan and Gorbachev. Genius. “Metric Customs is a label just for myself,” says Richard, without a touch of irony. “It started with programmable ignition systems and some tuning parts for the Russian sidecar scene here in Germany. Also, most of the bikes I built or helped to get running have my logo on them. But not all are as special as ‘Charlotte,’ ‘Wanda,’ or this, my new project ‘Elenifae.’ As always, the name comes from family members; so far they don’t seem to mind.” Rich builds all the bikes and parts, limiting the clientele to himself and his mates. Somehow we get the impression that he’s probably not short of those. But what he is short of is electricity. “I’ve only got two small garages, and believe it or not, neither of them have power. For all the big jobs, I usually have to do them after hours at work. It usually goes like this: disassemble in the garage, put it in my car, drive it to work the next day, unpack everything after work, work two days and nights, pack everything back into the car, drive back to the garage and unpack. Again and again.” Naturally, Rich hopes to find a proper workshop in Berlin in the new year. And we’re pretty sure his boss does, too. So, now to ‘Elenifae.’ In January this year Rich scored an Ironhead motor in pieces. You know the story. You’re watching on eBay. Nobody’s bidding. What’s a motorcycle-riding man to do? “So I got it, rebuilt it and put it in the corner of my garage. At the same time I helped a friend to build a bike. He just so happened to have a second Dnepr K750 frame with papers he was sure he would never use. So when it came time to pay me… well, you get the drift. Without really thinking about it, I put it in my garage right to the ironhead engine. And the rest is history.” “The project started on February 22nd this year with me cutting the frame apart and checking if this rather out-there idea would work. Naturally, the frame was too small, so I needed to rebuild it around the motor.” Rich carefully calculated some numbers and angles for a conservative rake, length and hight and made the frame’s new top and down tubes. While it would have been a much simpler affair for Rich to dump the Rusky swing arm altogether, he decided he really liked it – just like Putin likes shirtless bear wrestles. So he got stuck in and built a new swing arm made from a confabulation of the Russian original and an Ironhead spare. “I welded it together so I could use the original swing arm hinge, which was also cut and moved backwards to get enough room.” After that, it was a just a case of getting everything square with a laser and welding the whole shebang together with a few additional tubes. The next step? Rich tackled the engine mounts along with a thousand or so small holders, holes and tabs. Then the oil tank, the mountings for the footpegs, the saddle, the first draft of the fuel tank, a side stand and a rear fender were brought to life. “They were all made of sheet metal and old parts. Then I bought a new Harley springer front fork and mounted it.”

Wanting to make the tank a focal point for the build, Rich then settled on a bold, scalloped design that would not only encompass the entire side of the tank, but also allow for a decorative brass beam to niftily span its length. Think of it as the bastard son of a metal beam and a set of knuckle dusters. “The home stretch included the horn and light, which are driven by small brass buttons in the handlebars. As always, I added my electronic ignition module that I programmed and made myself. It uses my own free programming language. Yes, I am a proud geek.”

Then it was a (not so) simple case of connecting up the brakes, wiring the, erm, wires and lamps. Last but not least, it was time for the much maligned (aka ‘bastard tough’) German TÜV approval in order to get the official road worthiness license. ‘I got it first go on the 26th of July, 2014. Finally, I was done.” [superquote] “The Russian frame was a nightmare. Nothing was straight.”[/superquote]

“Then, in a moment of inspiration, I took the sidecar from another project just because it seemed to fit better with this project. Luckily, only a few small things needed to be changed. And that’s it! Maybe I’ve made it sound easy, but it was not at all. The Russian frame was a nightmare. Nothing was straight! In the end, most of it was replaced with the exception of the rear suspension mount, as that’s where the frame number was stamped.” For those of you interested in seeing the build in a little more detail, Richard has the complete photo set from the process here. Best take a packed lunch, if you get what we mean. It’s pretty clear that the attention to detail Rich puts into his builds also makes its way into his visual documentation. We’ll call the emergency services if you’re not back in a week.