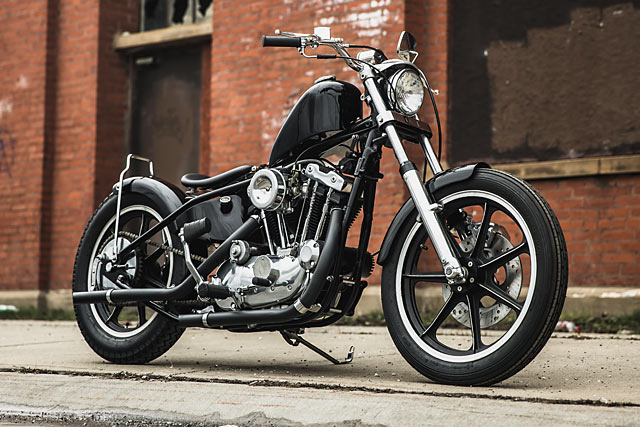 Bloody Harleys. Just when you think you have them neatly stuffed into their platted grey beard, tasselled leather, stars and stripes forever pigeon-holes, one comes along and kicks you right in the clichés. How can one brand be so damn changeable? Optimus Prime, eat your heart out. Cleveland’s GasBox seemingly threw this classic shop project ‘72 Harley Sportster bobber together using spare bits and pieces. Oh, and their custom bike genius. But the best part is that they are pretty much giving the thing away at the 2018 Fuel Cleveland Show. “This bike was an ongoing shop project that sat in the corner for a few years,” remembers GasBox owner, Jesse Basset. “Every time some parts came up that seemed to fit, we added them to the pile. We used a stock Harley 35mm narrow glide triple and made a custom fender for it. The bars are stock Harley 883’s with some Kustomtech controls and one of our own speedo mounts. Then there’s the original AMF mag wheels – an 18″ and a 19″ – mainly because I really like the look of mags on a rigid.” The rear fender is one that Jesse made, and so is the sissy bar. Tim, who also works at the shop, made the frame and oil tank for his own bike, but he then decided to try something different. Instead of letting it go to waste, they used it for this. How can a parts-bin special look this sorted? The exhaust is a set of GasBox replica XLR pipes that they ceramic coated black, and to supply them spent gasses, they used a CV carburettor with one of their own air cleaners, which seems to make for a great set-up on a vintage Ironhead. [superquote]“They took the time to find all the right NOS replacement parts for the rebuild, and it really shows when you are shifting through the gears.”[/superquote]

“The ’72 engine came from one of our customers via multiple rounds of horse trading. He has numerous projects going on at the shop at any given time, and he also had this particular engine in for a restoration project. It was built by Ohio locals Delzani’s Cycle, who are known for very meticulous Ironhead rebuilds; they took the time to find all the right NOS replacement parts for the rebuild, and it really shows when you are shifting through the gears.” But when the customer lost steam on the rest of the restoration project, GasBox ended up with the engine. “To keep it simple, we painted it glossy black and did some basic chrome and polish.” And the next thing you know, the Harley bobber was pretty much done. “After finishing the bike we were probably just going to Ebay it, but then we thought, ‘why not raffle it off?’” So starts the bike’s exciting post-customising story. “I am partners in the Fuel Cleveland bike show with Tyler Malinky of Lowbrow Customs and Mikey Arnold. We started this show four years ago as a way to bring our industry to the Cleveland area and really to just have fun. I have been traveling to shows on both coasts for years and I really wanted something for us. And since we actually do this show for fun and have our own businesses, the show is completely free.” There is no admission and there is no entry fee for the builders, it is just a good old time for all.  And Jesse notes that it is the only show of its kind that is completely free. “Of course someone has to pay, so that is where our sponsors like Lincoln Electric and Kustomtech come in; they are the true supporters of the industry. This year when we raffle this Harley off, all of the money will go to keep our show free and fun for years to come.” “Also, this year we have teamed up with the guys from the Mama Tried show in Milwaukee and they are bringing the ‘Flat Out Friday’ flat track races to Cleveland. It is going to be a long weekend full of parties, races, and custom motorcycles.” Sounds like heaven.

For your chance to ride home from Fuel Cleveland on this beautiful Harley-Davidson Ironhead bobber, just click here and purchase a Fuel Cleveland Logo patch. With every patch purchased, you will receive a free entry ticket for a chance to win the bike. Jesse says that you must be present to win, but with what’s on offer, we’re pretty sure that’s not going to be a problem.