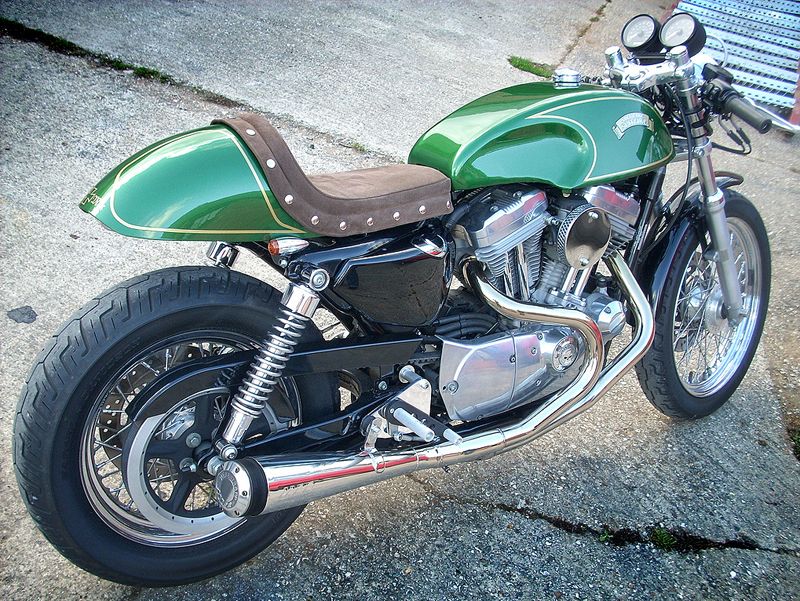 Rachael Prevett, or Racy Rach as she is more commonly known to her friends, has been riding motorcycles her whole life. “I’ve been riding since I was 8 on the farm where i grew up” says Rach. She has ridden across Europe to Barcelona and Monte-carlo, raced a Ducati in drag racing, sprinted at Brighton speed trials and ridden Flattrack on her T100 pre-unit Triumph at the Hayride – now you know why they call her Racy Rach.

So when Racy Rach wanted a new ride, she approached Steve at Red Max Speed Shop to build her something special. Rach wanted a newer café racer, so after looking around Steve decided a Harley Sportster would be a good option. “She had to have a 1200 and we wanted a clean late one, so this 2005 seemed perfect for the job” says Steve.

The first thing Steve did when he got the donor Harley back to his workshop was attack it with the disc cutter. “We removed all surplus crap – and there was plenty of it!” says Steve. After removing all the unwanted metal and cutting over a foot off of the rear frame, the bike had lost more than 30kg – almost a contender for the Biggest Loser.

The bike originally started as a 883XLH with a 1200 conversion, then they added a Supertrapp pipe, alloy short circuit tank, Redmax large cafe seat, rearsets and tail lamp, spondon clip-ons, side mount number plate, Triumph spitfire air cleaner, alloy front guard and Akront flanged rims in 3 x 18″ both ends and lastly Avon roadrider tyres for extra grip. The beautiful alloy tank and seat were painted in an Aston Martin metallic green, then the seat was covered in brown suede by Glen Moger at Redmax.

Overall the guys at Red Max have done a stellar job and Rach is extremely happy with the finished result. Not only does it look great but she also tells us it rides like a dream. “The ride experience is similar to my old Triumph café racer (Strumpet), but with more muscle!.”

Want to see more? You can view the whole build process in pictures on the Red Max Flickr page.