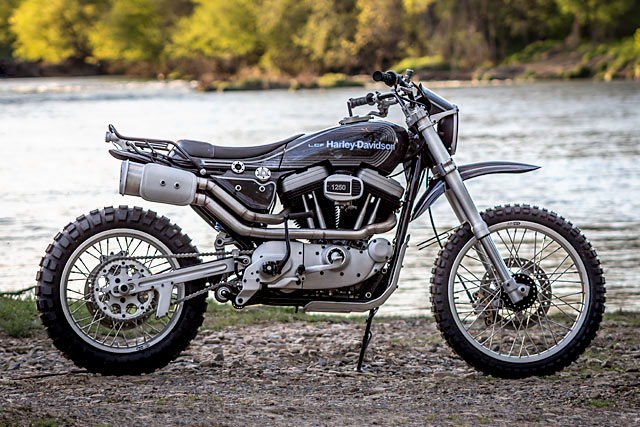 Alright, I’ll say it. It’s impossible to hate Harleys. It’s hard to spit that out that when confronted when the fat old bloke with fake outlaw patches or the young guy in the classic Tapout and Sons of Anarchy hoodie and t-shirt combo. And that’s without even talking about the bikes themselves. But truthfully, nobody actually hates Harleys. Because no matter what you’re into, someone out there has built a custom ride on a HD platform that’ll flick your switch. Exhibit A: the latest creation by LC Fabrications, an incredible dirt-oriented Sportster build they’ve dubbed the ‘SX1250’ – a ride that’s sure to turn the head of the firmest Harley critic. What’s with the name, you might ask? Well, the SX1250 title is a riff on the old SX250 Aeromacchi Harley Davidsons produced in the 70’s that took nobody by storm. Long derided by the legions of Harley faithful, the old two-stroke Italian Harleys may be the ‘Dylan goes electric’ period of Harley history but people are starting to like them more and their enduro looks. They were honest little dirt bikes and LC Fabrications are drew upon that dark period of Harley history for their version – a great big honking dirt monster that still runs a God-fearin’, tobacco-spittin’ Sportster engine.

The donor bike itself came to LC Fabrications in a bittersweet way, as it was bought from the deceased estate of an older friend of the shop. And when it was in the hands of LC Fabrications head, Jeremy Cupp, he formulated some straightforward plans for the bike – a quick and easy dirt-oriented Sportster build. ‘The initial build was to be short and sweet, with just some knobby tires, stilettos and lower gear,’ Jeremy recalls. ‘It should be finished in a few weeks, right?’ That wasn’t the case, with almost three years elapsing from it’s first jaunt onto the hoist. So what happened in that time? ‘It kept getting pushed into corners to make way for more important projects,’ he says. ‘But it left plenty of time for ideas to bounce around in my head. The bodywork was the initial dilemma, metal would be bent and trashed and off the shelf dirt bike fenders weren’t going to cut it. I’d been interested in learning the process of hand laying carbon so I did some research and began making molds and plugs…’ But we’re getting ahead of ourselves.

The first thing that Jeremy tackled was the frame itself. ‘The subframe of a Sportster is a hideous, heavy chunk of cast steel, so I promptly cut it off to make something nicer of my own,’ he says. ‘Once removed, I realized I had a nice open space for a monoshock.’ Not content with a straightforward ladder bar setup, he started work on a billet swingarm that accepted a rising-rate suspension linkage. Such a carefully-constructed rear end meant the front needed an upgrade and LC fitted a set of fork tubes from a ‘01 YZ250 and made a set of triple trees to set the correct geometry. Underneath that the heavy factory hoops were ditched in favour of a set of Sun rims mounted to the factory HD hubs.

[superquote]“The subframe of a Sportster is a hideous, heavy chunk of cast steel, so I promptly cut it off.”[/superquote] The bodywork is all custom built by Jeremy, who spends most of his working life at a machine shop in the hills of Virginia. And the attention to detail and fit and finish is exactly what you’d expect to see from a man who spends his weeks bending, forming, shaping, cutting and swearing at sheet metal. Although this is mostly carbon fibre, the level of fit and finish – take the tiny gaps between the seat unit and the tank, and the tank and the cylinder heads – can only come from someone who has a formal background in shaping and working with materials. The level of attention and hottedupedness extends to the engine as well. ‘I come from the old school where kickstart bikes were cool, and dirt bikes were kick only,’ Jeremy says, ‘So I called my friend Pat at Led Sled and picked up one of his Evo Sportster kickstart kits’. Unable to leave it alone from there he also cut the enter starter nose off the stock cases and made a billet primary cover to fit. He also designed a hydraulic clutch actuator using the internals from a Buell 1125R. The rest of the engine is a collection of parts LC Fabrications had hanging around their workshop – Buell flywheels, S&S 1250 cylinders and Buell heads. To top it all off Jeremy laid down the paint and graphics to accentuate the lines of the bike and show off the carbon work underneath. ‘The carbon is visible, so there was no room for errors when making it – so there was no hiding anything underneath the paint’. The livery is a homage to the Aeromacchi Harley Davidsons of the 1970s. To match that, everything aluminum was sanded with 220 grit and given a coat of flat clear powder by Defensecoat in Richmond, Virginia. Jeremy loves the results of all this hard work as much as I do. ‘I’ll admit that I’ve built a lot of what I call “butt jewellery’”, he says. ‘Mechanical sculptures and show pieces. This is a new direction for me as it’s designed with function over form and yet still wound up being aesthetically quite nice too.’ That’s the understatement of the century. ‘I also see it as more of a prototype and something the factory should take note of rather than a creative expression that I usually find myself working on’. If Harley was to build something resembling this, I’d be the first to bust out the chequebook. But in the meantime, I’m just going to stare at it a little longer.