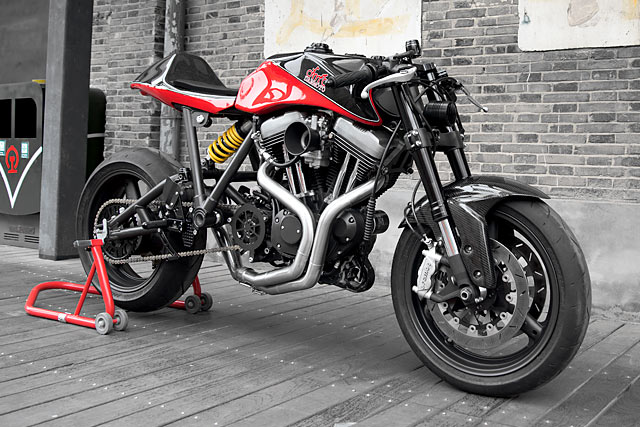 Dan Moto have been building exhausts that please owners and piss off neighbours for the last ten years. And as their catalogue of bike parts expands quicker than a Harley owner’s waistline they’ve decided to showcase exactly what their team of fifty staff can do – by building a custom Sportster completely in-house. A Sportster that has its emphasis firmly on sport. And what better way to show what Dan Moto can do, than by modifying one of the most ubiquitous cruisers in the world? ‘We wanted to take the most popular engine available and build a complete bike around it,’ head of DanMoto, Wei Liya says. ‘It had to go fast and show off our fabrication skills in the process, with everything being made in house with the machines and equipment we use in daily production’. With that, Wei and the team purchased a stock Sportster online with the sole intention to butcher it for its engine. Just about everything else on the bike would go. So, with the powerplant out and on the benchtop, the team calculated the overall frame geometry they wanted. And then they made a jig for the frame and swingarm, which was designed in CAD. All the important parts – the steering head, engine mounts, swingarm mounts and every little bracket mount and adjuster was CNC machined out of billet aluminium. When that was completed, the frame was fitted, welded together and then powder coated, before work continued on the suspension. The Dan Moto Sportster runs front forks taken from a GSXR1000, mounted to a modified standard lower triple tree and a top tree machined from scratch. Both the front and rear wheels were taken from a GS1200SS – a gorgeous retro motorcycle that never made it to much of the west. At the rear, the shock comes via a Ducati Monster. [superquote]“The headlight and mounting assembly is a gorgeous example of the work they can do.”[/superquote]

There’s a litany of tidy little details scattered throughout the Harley Sportster. Some are taken from the Dan Moto catalogue, such as the modified Highwayman exhaust, rear sets, fluid reservoirs and clip-ons. But many items were made from long hours spent in front of a mill. The headlight and mounting assembly is a gorgeous example of the work they can do. But metalwork is the bread and butter for the team at Dan Moto. More difficult for them was getting the carbon fibre bodywork right. ‘It was a bitch to make,’ Wei recalls, ‘It’s all hand made and building and shaping the parts to have them look good and fit nicely was a real pain in the ass.’ But was worth it, although it took the team a bunch of time to get right. ‘The first set of fibreglass parts had to be fillered and sanded for several days to look nice. Then we used it as a plug to make the carbon fibre parts.’ It may have been a bitch, but man, it looks damn excellent in place. For an added detail, the team runs indicators mounted in the tank itself. The whole Harley-powered thing, from start to finish, took Wei and his team of experts four months. That’s pretty damn quick when compared to other builds, and absolute light speed when you consider that virtually everything was made from scratch. It’s their first tilt at building a custom bike. But when you consider their workmanship, their eye for design and quality of the finish it, surely shouldn’t be their last.