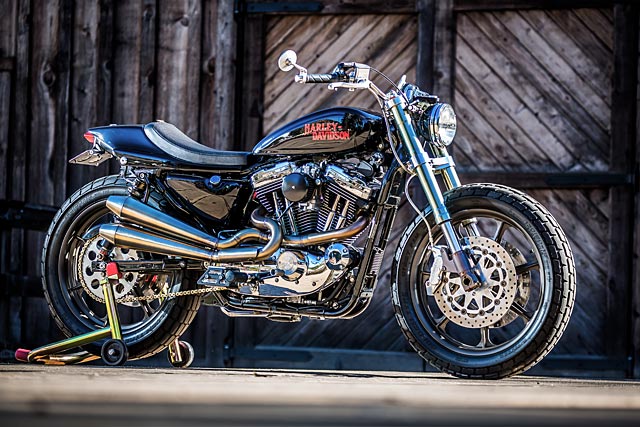 As always at this time of year, Harley have just wheeled out their 2018 models to the world’s eager press. Sure they look cool but all we can see is the big, fat hole where there isn’t a street tracker. C’mon Milwaukee! Just slap a light and some indicators on the XG750R and be done with it. No? Well, that’s cool because Mule Motorcycles’ Richard Pollock, a.k.a. California’s king of trackers, has just delivered us a Harley Sportster XL1200 street tracker that should keep all but the most unhinged of HD tracker fans happy for a millennia or three. Far from being a regular walk-in customer, Mel Cary, the bike’s new owner, used to work alongside Rich. “The bike was built by Mel and myself at Mule Motorcycles. Mel was my right hand man for a couple of years after a long career as a machinist and engine builder, working mainly on Top Fuel dragsters and drag boats”. Mel has owned several hot Ducatis and dirtbikes in the past, but after a few years of doing machine work for Mr. P, he was clearly bitten by the street tracker bug. Now it was time for him to build his own. “Mel did all the work with only some suggestions, experience and spare parts coming from me,” says Richard. “After building more than 60 Sportster-based street trackers, I think it’s fair to say that I have a pretty good Idea of what works and what doesn’t”.

On the hunt for a sweet donor, Mel located the bike with a mere 240 miles on it in Phoenix, Arizona. A weekend road trip and some friendly haggling got the bike on the trailer and safely back to Ramona in California. While the tracker inspiration for the bike was pretty clear, Richard says that a few touches were added from an unexpected source. “We decided that we wanted a street bike with some NASCAR touches. Something that said ‘all business’ to those in the know”. The first item on the scrap cardboard checklist was setting up the chassis. 19″ Morris HD wheels were widened by Kosman Specialties and then powder coated in a dark bronze. Then the Ducati 996 forks were slid into the A&A dirttrack clamps and bolted onto the steering head with a 7075 alloy stem. “The pair of Penske remote reservoir twin shocks you see are pretty rare on motorcycles. This set was sourced off a formula car from a customer in Switzerland about ten years ago. The wheels and shocks were in fact components I had been saving for years to use on my own build. Mel is a fanatic about details, so I knew his build would be worthy”. “One of the neater details is the combo battery and breather box. Mel went with a Lithium battery, dropping a bunch of weight and leaving a big, empty space. He then made a trick box and relocated the head breathers from the carb mount bolts on the right to the left sides of the rocker boxes. It’s clean as a whistle”.

The rich, black paint on the tank and seat was applied by David Tovar at Superbike Paint in San Diego. And other than the exhaust, carb and some jetting, the super low mile motor remains pretty much stock. “The breather box was hard. Well, maybe not hard, but just an interesting departure in concept from having the hoses dump into the mouth of the carb which is the Harley factory design. To be honest, no part of these builds are hard anymore; some parts are just more ‘interesting’ than others”. “I like how the Harley looks like a proper street tracker and not just a random bike with the front fender removed and some aggressive tires installed. Experienced riders can tell the difference and they usually end up staring. But even better than that is hitting the starter button and blipping the throttle. The exhaust note is magic”.