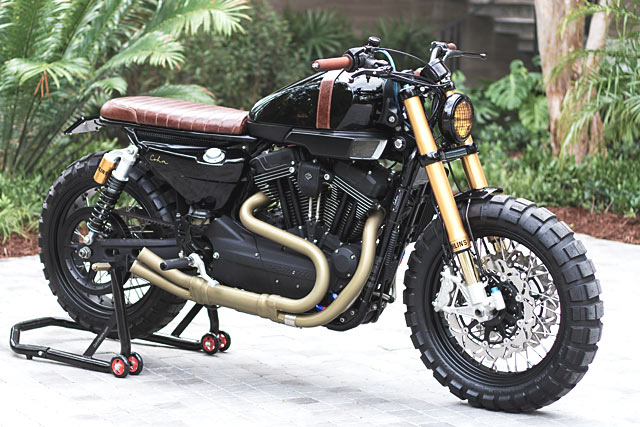 “When I make it big, I’m going to build the coolest custom bike.’ Don’t deny it; we’ve all thought about it. Imagine not having to cut any corners or settle for second best. It’d be like rocking up to a top restaurant and ordering everything. And for Miami restauranter and businessman John Kunkel, that’s pretty much exactly what happened. His company owns and operates some of the world’s most popular restaurants, and what better way to reward yourself than with an Öhlins-equipped XR1200X Harley scrambler that you’ve always wanted? Now, thanks to local shop Cohn Racers, he’s got it.

Currently a two-man shop, JP and his father John often get help from a few good friends in the local bike trade. As bike lovers pretty much since birth, their age gap gives them a handy combination of old school and new school styles to draw upon. After working behind closed doors for over a year on the designs of their first bikes, they finally had them at a point where they were confident they could make a bit of a splash. And splash they did. Starting life as a Harley XR1200X, which in the grand scheme of things is a pretty cool Harley to begin with, JP had bigger plans for the donor. “This will be a limited run of 10 bikes which we are calling the Muscle Rs.” This one, in case you were wondering, is number two. “These are not easy bikes to find,” laments John. “Especially the later models with the black engines. We searched nationally for several weeks with very little luck but we ended up finding a really clean one that had been traded in at a Suzuki dealership in Melbourne, a few hours north of Miami. So we drove up there and luckily it was just as advertised.” Starting out, they knew they wanted a meaty American V-twin scrambler with dual-purpose tires. So they looked at the Dyna and then the Sportster; but they soon realised that the XR Harley was clearly the way to go. “It had that flat tracker vibe. One ride of the bike and it was clear that this was the Muscle R.” Working closely with the customer to come up with the leather theme on the tank, they were channeling the designs of 50s race cars with their leather hood straps. “We find that vintage race cars are always a good source of inspiration for our builds; their wire wheels, loud exhausts and headlight grills are timeless.”

[superquote]“We find that vintage race cars are always a good source of inspiration for our builds.”[/superquote]

Stripping the bike and cutting the frame were the first steps in the build, followed soon after by the two welding on their own subframe and mounting twin Öhlins bouncers out back. Spinning the bike around, a full front-end conversion was carried out with custom-machined triple trees to enable the Öhlins forks to be fitted. And don’t forget their partners in crime, the chunky Brembo brakes with their dual 320mm rotors and stainless lines. Talk about no nonsense. “Next we designed a new seat pan and upholstered it with the best leather we could find.” Of course, the rather average stock XR wheels were binned in favour of new custom wire wheels and Shinko Adventure Trail booties. “To keep it reliable, we left the engine mostly stock but we did tweak the engine management system for better engine response and added smoothness. We also customized the exhaust and gave it a splash of our top secret coating.” We’re guessing it’s alien tech. On the electrical front, they managed to use most of the stock harness but did add their custom-faced speedo, LED indicators and brake lights. And any of the other parts of the bike that are prone to wear and tear were serviced or replaced, too. “As a fairly young shop, getting the money together to buy the expensive parts is probably the hardest thing we’ve encountered,” says JP. We’re pretty sure that all that Swedish gold didn’t come cheap. “Getting the designs right to the point we were happy with them was also a long and complicated process, and we are still trying out different painters but it’s really hard to find decent shops in Miami.” With 20/20 hindsight, the two tell us that it’s the scrambler’s looks are what they are really happy with. “It looks like something Harley CVO could have built,” smiles John. “The bike stands like a bull; mean and lean. We really like the leather accents on the tank; they blend perfectly with the seat and the black paint. Even people who are not into bikes mention how special it looks. We guess that the attention to detail is pretty obvious,” says JP. We’d agreed wholeheartedly.