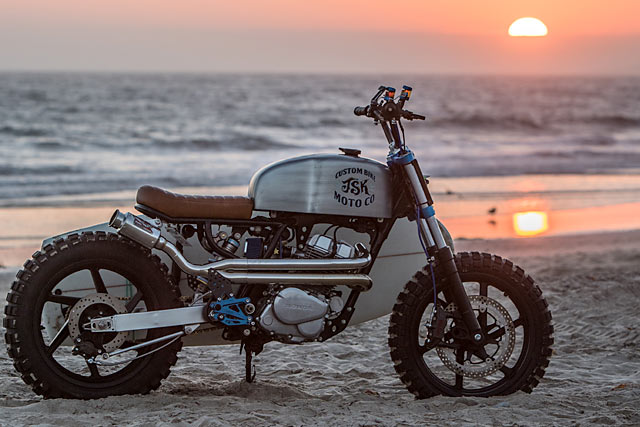 At first glance, Taiwan and California would seem to be world’s apart. But when you’ve spent your childhood in the East and now live on the West Coast, we guess the two just might cross-pollinate in some pretty unexpected ways. And for JSK Moto’s Samuel Kao, that mix was the guiding light for his latest build, a Honda Beach Scrambler with more than a little Taiwan built right in. Named ‘Project Argent Corundum’ (meaning ‘Silver Jade) by Sam, the build is based on a Honda Rebel 250 that was stripped down and customised with the intention to create a lightweight, fun motorcycle that was a real tribute to youth. From the factory, the motorcycle weighed in at around 141kg (331lbs) and the JSK team managed to trim it by a solid  23kg (50lbs). Another goal for the project was to keep the original engine and frame but customise everything else with parts sourced from Taiwan – Sam’s birthplace. “Using parts from the East was a decision to pay emotional tribute and respect to the first  25 years of my life, being raised in Taiwan,” says Sam. “With this project, we found there are lots of quality parts from the country. Regardless if it was for aesthetics, mechanical design, or engineering, the parts and professional services we used all have roots from there”.

The front shocks for Argent Corundum are an OEM part for the Taiwanese SYM T1. These are then connected to the frame with a WRRP triple tree. Keen to fit a pair of BMX bike carbon fiber handle bars, they commissioned local metalworkers Black Smith Co. to make a bar mount to fit on top of the triple. They also installed WRRP rearsets and exhaust. For the break and clutch upgrades, Sam utilised a Frando master cylinder, clutch cylinder and caliper with PSR fluid reservoirs thrown into the mix. To make the engine breathe a little sweeter, they also slipped on a SIMOTA air filter. “Then we commissioned AirRunner, our favorite custom painters, and once again they managed a truly beautiful job. We wanted to make it a budget friendly build, so this time the tank is not hand-made but instead a slightly modified tank sourced from a Royal Enfield. We chose that tank for the same reason we chose the number plate and headlights; the basic design elements of the bike are cubes or rectangles and the tank also followed the theme. Another reason why we chose the tank is because it can hold 17 liters (4.7 gallons). With that much fuel, you can basically scramble it for days on end before your next fill-up”. The Honda’s rear shock is a custom-tailored Gears Racing HILL-2 Plus and the rims are from the Kymco Quannon 150m, as is the aluminium rear swingarm. Rubber-wise, Sam used the classic Maxxis 17″ flat track tires for the general riding setup. And for sand use, some German Continental TKC80 hoops are fitted. “Project Argent Corundum was intended to be a lightweight, easy-going motorcycle that really only focuses on one thing. Happiness. Often we pursue the intense thrill of acceleration from a large displacement motorcycle. That’s cool. But we found that sometimes it feels great to get on a small bike for a bit of off-road fun”.

[superquote]“a lightweight, easy-going motorcycle that really only focuses on one thing. Happiness”.[/superquote] And as you can see from the photos, it’s also a very versatile little Scrambler. “It can be your little motorcycle to take for a free ride at a dry lake,” says Sam. “You can also use it as a racetrack pit bike, run local errands, or to take your board and go surfing. Whatever your pleasure is, this Honda won’t burden you with anything more than happiness”. Where do we sign?