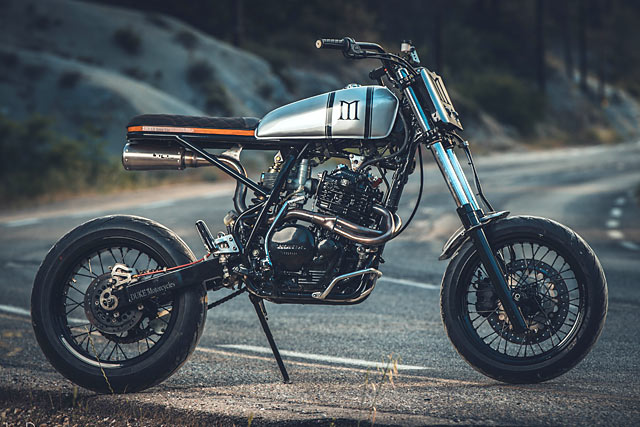 Life can be a lot like a game of Texas Hold’em, you can’t determine which cards you’ll get dealt, but what you do with them and how you play that hand is down to you. It’s something we instinctively know and why so often we find ourselves cheering for the underdog, knowing their victory was hard-earned. It’s fair to say that Maxime Montaggioni didn’t get dealt Aces, he is missing his right arm; but that hasn’t stopped him from becoming a World Champion Snowboarder and winning Gold in Taekwondo. But racing down mountains and kicking people in the face just wasn’t enough adrenaline. So he’s commissioned fellow Frenchman Lionel of Duke Motorcycles to build him a steed of speed based on 1993 Honda XR600, appropriately named Mad Max. Lionel has been a car and motorcycle mechanic for more than 20 years, but having earned his stripes in the automotive world he decided to set up a small shop dedicated strictly to custom bikes. In the hills above Nice, in a small community called Tourettes-sur-Loup, his workshop is typical of the one man operations of old where hand crafted customs come to life. But knowing of Maxime’s sporting accomplishments when the man himself arrived at the Duke door Lionel was in awe. “I said to myself, wow this guy is so impressive, he rides his motorbike with just one arm! So this project had to be at the same level.” Not only did that mean a world-class bike, but one befitting the character of the man known as Mad Max, with a unique personality, agility to carve the mountain turns and the ability to be ridden with just one hand. Oh and one last thing, the crapped out donor bike had to be customised and finished in four months! The XR600 was an incredibly successful off-road machine for Honda winning races and flying out of showrooms around the world. But to create a tarmac terror Lionel began by stripping off her clothes, removing anything that wasn’t absolutely necessary and ditching the plastics that gave it such a down and dirty personality. The entire factory subframe was cut off back to the centre post behind the engine before Lionel got to creating something entirely new. Bending up pieces of 25mm tubular steel he’s crafted a unit that beautifully integrates into the factory frame with even the tail light install flawless in remaining slimline. Mad Max had made a request for some timber on the bike and Lionel found the perfect spot, using a hardwood plank neatly shaped into the base of the seat. On top it’s been padded and stitched with Alcantara and a non-skid material by the fine folks at NMB Design in Nice. With the classic styling of the rear end complete the stock plastic tank would have looked completely out-of-place. So Lionel fabricated mounts to fit up a steel piece of an earlier vintage and started on replacing each plastic part for custom metal components. The front guard is perhaps the most unusual, the slim blade design suspended by steel cable, the kind Max uses to pull him back up the snowy alpine passes. The headlight surround also got a total re-design with a race plate fabricated and then two holes made to poke LED projectors through that beam like an Owls eyes in the night. The paint work is simple and understated, with black paint and powder coat covering the majority of the bike and a silver base with Mad Max logos. But the functionality of the bike has been designed to be anything but understated and it starts with the Super Mototard suspension setup. With the intention of carving through the mountains around Nice, like the great car chases in the De Niro movie Ronin, the execution had to be flawless. The new rear shock allows the bike to be perfectly dialled in for Max’s weight. While the factory air-assisted Showa front forks have been rebuilt to suit. With the handling department sorted for the twistys the wheels were an obvious selection with lightweight rims laced to the stock hubs and powder coated black. Pirelli Diablo rubber ensures that Max is glued to the ground and the 160 section rear has no problem taming the power of the single. But the brakes are where things start to get really interesting; with no right hand to operate the front lever, both clutch and brake lever are on the left hand side. Lionel created the custom setup by using a radial master cylinder that gives more room for the clutch perch to sit on the tapered bars without the lever extending too far out. A quick action throttle completes the setup with the dual cable design giving a direct feel back to the rev happy Honda single. Lionel used all of his 20 years mechanical experience to give Max a reliable engine with plenty of ponies from the near 600cc 4 valve screamer. Having spent so much time making the bodywork streamlined the exhaust was one of the earlier ideas for the build. The full stainless system runs under the frame with aluminium supports that ensure the system doesn’t crack. Then Lionel turned to the folks at Evoxracing to design a quieter HP Corse rear can that pokes out shotgun style from under the seat. There’s plenty of snap, crackle and pop from the system for fellow motorists to hear you coming, but to keep the law happy a set of fork mounted turn signals have been mounted up. A single mirror serves a similar purpose with a centrally mounted digital speedo only delivering the most vital of information. To finish things out a new set of bear trap pegs has been fitted up for the rider and under instruction a different pair for the pillion. Because what looks more insane that a man with one arm muscling a killer custom through the French forest than adding a passenger into the mix! Lionel couldn’t be happier “What I like the most about this bike is the way the whole thing goes together, it corresponds to its owner perfectly.” As for Max, all we know is he’s somewhere in the mountains making the little single scream.