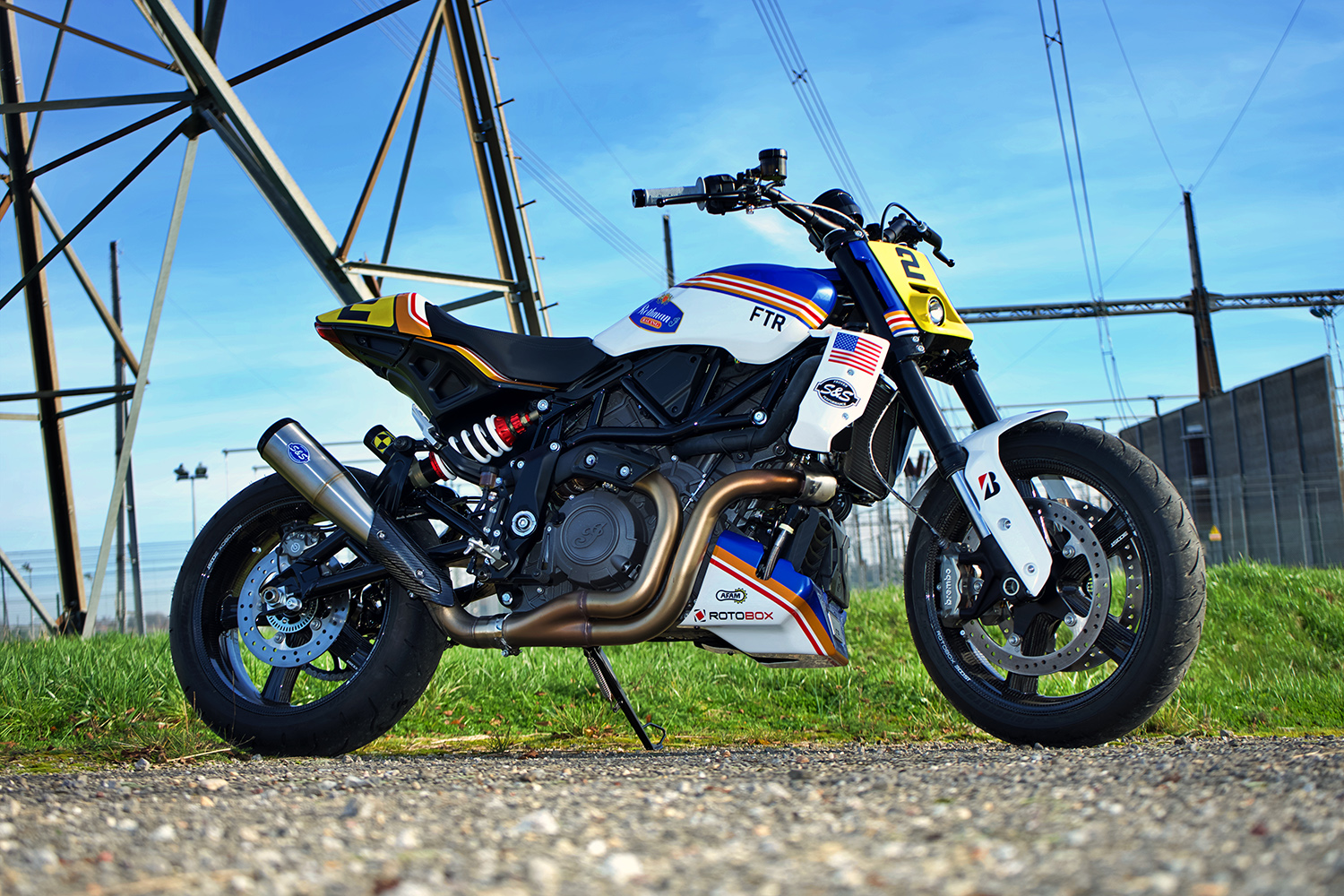 Wrist cracking, spine snapping powerbands and an absolute gluttony of tobacco sponsorship made racing in the ’80s and ’90s a dangerous thing, be it for the highsides or the heart attacks. But boy was it a blast and many of the current crop of custom builders grew up on the era, fuelling their passion for two wheels. For Thomas Castany and many of the crew at Indian Motorcycle Metz, the memories of those days live on vividly in their imagination and never fail to inspire. So tasked with crafting a race replica Indian FTR 1200, the boys got busy winding back the clock, giving a retro vibe to a modern marvel.

Located in the North East of France in the historic city of Metz, the Indian dealership and workshop is surrounded by antiquity, with the settlement dating back more than 3000 years. So it should come as no surprise that Thomas and the crew like a retrospective approach in the things they do, and while not turning back the clock quite as far as the city they call home, the new project was a chance to combine the latest technology with the joys of their childhood. “At Indian Metz we like to dust off the past to project it into the present!”

Thomas knows a thing or two about building a sweet Indian, he’s visited their HQ, hung out with the best American builders and also crafted some fine examples of his own. Picking the donor bike for this build was as easy as it gets, being an official Indian dealer it was simply a matter of walking into the showroom and rolling the new FTR into the workshop. The decision was made to go with the Rothman’s racing colours, arguably the most famous racing livery of the period. With that decided the rest of the parts were ordered and things got underway.

To change the look of the bike the body panels were all pulled off and the factory headlight removed. In its place goes an all-new front number board, with a vented opening and single projector light giving a sleek look. Diving into the Indian accessories catalogue the boys pulled out the latest radiator covers that have just been released to the market. Before giving the whole bike a much beefier look with the addition of a Wunderkind belly pan, that also helps balance out the appearance of the top-heavy machine.

To lighten things up the seat cowling has been replaced with a carbon fibre part, while the front fender is modified to suit their design. Then a set of blank FTR tank covers were bolted on and the canvas was ready for paint. Taking on the challenge was the team at AR Performance painting, specialists in supercars and race vehicles, and it’s clear to see they knocked it out of the park. From the recreation of those famous logos and the corresponding graphics to the flawless pinstripe lines and the rich, deep gloss that has the bike beaming, it doesn’t come cheap, but it’s worth every cent.

From nostalgia to the latest in modern technology, the next modification made to the Indian is the single biggest and best change you can make to a motorcycle. A shift to lightweight wheels, and not just any, a set of 17in Rotobox Boost rims that are lighter than any produced by their competition and weigh just half of the factory offering. Such a drastic reduction in unsprung weight makes for huge performance improvements in handling and braking, so to take an even bigger step forward Thomas also spec’d out a fully adjustable Mupo shock for the rear.

With race bike looks and handling, the FTR needed the soundtrack to match and thank’s to Indian’s partnership with American giants S&S the decision was made easy. The factory cat delete and Grand National stainless steel end can emit a deep rumble that let you truly hear the big V-Twin purr. While a K&N filter replacement on the inlet side and tune unleash those extra ponies. Sending them rearward is a new chain and aluminium sprocket, again reducing unsprung weight even further.

On his trip to the US to meet with Indian, Thomas made sure to fill his suitcase and brought back a few pairs of Jared Mees replica Neken handlebars for a more positive steering experience. These are then matched up with a set of Pro Taper grips and the bars reassembled with all of the factory goodies going back in place. The finished result is stunning with its retro racer looks, incredible handling and the sound to match. Proving that the less is more approach can deliver one hell of a ride and the key is selecting just the right ingredients, rather than trying to stir every last part into the pot.