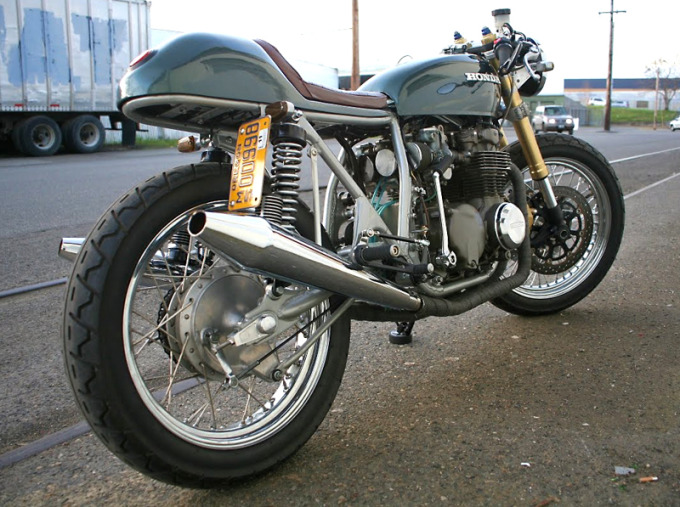 Discovered this beautiful CB550 on the frequently updated and entertaining Motorcycle Picture of the Day blog. Completely garage built by a guy called Eric, he goes into great detail about how he created this cafe racer. Eric says he “fitted a set of forks from a 2004 GSX-R 600, using a Harley narrow glide wheel which fit surprisingly well between the calipers; it was almost a plug-n-play operation. The rotors are 320mm units from a Hayabusa which required 10mm spacers underneath the calipers. The eBay front end also came complete with clipons & controls so I decided to go ahead and use them; the right control wouldn’t fit with the bar-end mirror so I binned it in favor of a Motion Pro throttle assembly and start/kill switch from an R6. The rearsets are Tarozzi universals mounted to the passenger peg mounts. The rear wheel is a Harley 3.5×18 rim that I laced to the 550 hub with Buchanan stainless spokes. I popped the top end off the engine and freshened it up a bit with a set of 59mm pistons and camshaft from a SOHC CB650 for a little extra oomph”. Eric has really stamped his individuality on this CB550, we particularly love those Norton commando peashooter exhausts which look like they produce a mighty bark. Check out more pics of this stunning bike and the full story on MPOTD.