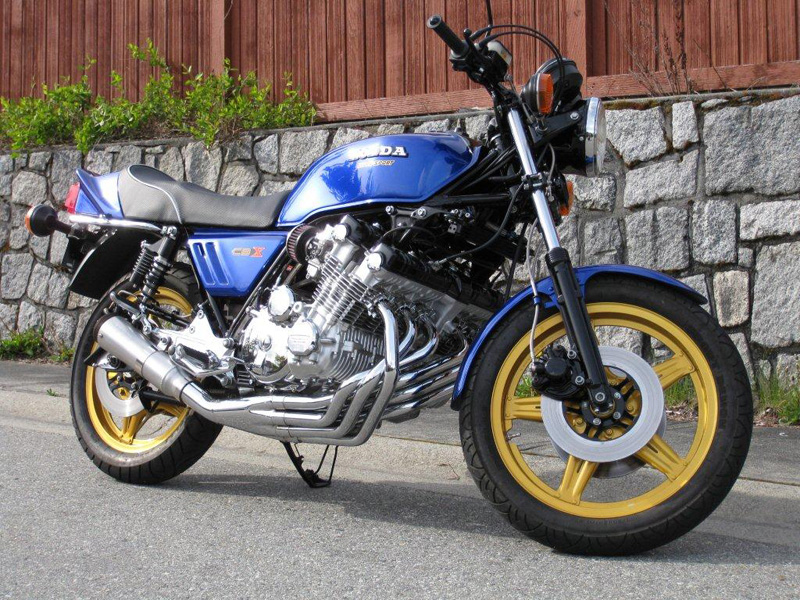 Judging by these photos you might think that Honda were still manufacturing the legendary CBX and this one had just rolled off the production line. The CBX1000 was the first production motorcycle Honda produced with a six cylinder engine. With that intimidating six-pipe exhaust system we’ve always had a soft spot for the CBX. This royal blue 1979 Honda CBX was painstakingly restored to better than original condition by Canadian Randy Cowling over a staggering 2 year period. These are some of the specs Randy sent us: “a 1147 big bore, Supertrapp exhaust, K&N Filters, Dyna Ignition, valves, cams, steel brake lines and heavy duty clutch. Works suspension with Race Tech gold emulator forks. Fully redone gauges with white faces and stock but rare European Style low rise handlebars and controls. Paint by Scott at DB Custom Paint in Vancouver, British Columbia – which includes the body work along with the frame and gold Comstar wheels. Seat by Luimoto, tires are Pirelli Sport Demons especially designed in sizes to fit classic sport bikes. The bike took over 2 years to complete and a big thanks have to also go to mspeed performance, for the time it took to fix a botched engine rebuild by a popular US CBX engine rebuilder who should remain nameless. The bike handles as well as possible for a bike of this weight and age and positively rips, producing over 125hp at the rear wheel. The sound from the Supertrapp exhaust with the maximum amount of baffles is the sweetest of any motorcycle I have ever heard. Loud, yet beautiful! You can’t beat displacement for sound and power.”

The Honda CBX is now a sought after collectable and looking at the price wanted for the recently restored Deus Ex Machina CBX it might be worth trying to track one down on ebay. To view the Deus CBX and read a great little story about it, hit the jump.