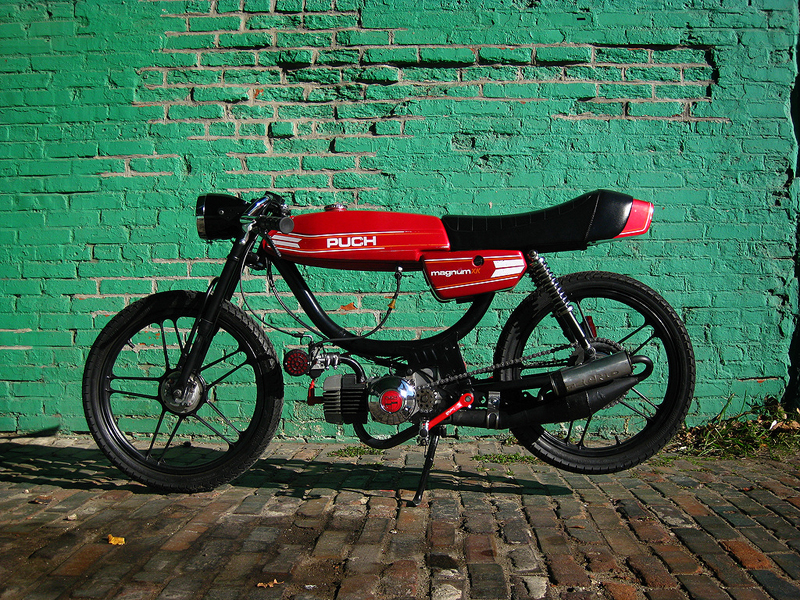 Most people probably don’t know much about Puch Motorcycles but they happen to be one of the oldest manufacturers on the planet. Founded in 1889 in Austria they didn’t start producing motorcycles until the early 1900’s. Then 100 years after it was founded the Puch motorcycle company was sold to Piaggio, maker of the Vespa, who apparently still produce bikes under the name “Puch”. The pictured bike is technically a moped but there’s no denying it has some really nice cafe racer aesthetics. I first spotted this beautifully restored 1978 Puch Magnum XK on Flickr and was kindly sent some information by it’s owner, Puch enthuisiast Jeremy from Kentucky. He told us “this 1978 was the first year and model of the Magnum released by Puch. It was the same year that Puch had record sales upwards of 275,000 mopeds and motorcycles. Of course, most riders have probably heard of the Puch Twingle, not as many have heard of or seen the Puch Magnum. In the late 70’s and early 80’s, mopeds were quite popular for getting around without having to spend a lot of money on petrol. The appeal of the Magnum is, in my opinion, obvious. Clean lines, cafe racer-type styling, and the classic Puch e50 moped engine made the Magnum an easy sell. I bought my XK as a part of a three bike deal. I hadn’t actually seen any of the mopeds before buying them. All three were in rough shape. When I got the Magnum home though, I immediately saw its potential. Although, this might have been difficult for others to see; the engine was plastered in dark mud, every bit of chrome was rusted out, and the cylinder and piston had been in a tight lovers’ grip for many years. It took several days in a lubricant bath to get them to separate. The bike was taken down to the frame and every tab was chopped, smoothed, and prepped for paint. All unwanted/unnecessary pieces were removed. The engine was rebuilt using new quality performance parts, readily available seeing that Puch mopeds have been around for such a long time. The Magnum has been rebuilt from the ground up. I have spent countless hours on both cosmetic work and engine tuning to get the bike to where it is today. For the money I have put into this mini cafe racer, I probably could have bought an already modified vintage motorcycle. But I wouldn’t trade the Magnum or the experience I’ve had making it my own for anything. Most importantly, it is a lot of damn fun to ride!”. This bike obviously wont appeal to everyone, especially those who love their horsepower – but it has to be one of the best looking mopeds around. Check out more shots of this mad moped at Jeremy’s Flickr page.