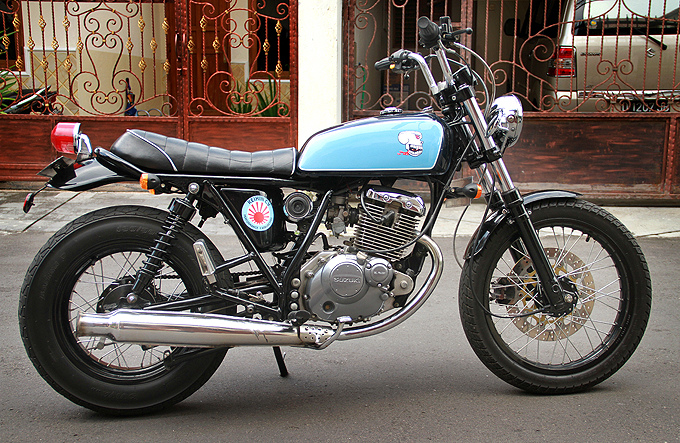 The Suzuki EN125 is a relatively unknown commuter bike thats only real benefit to most people is its great fuel economy. Definitely not the kind of bike you would imagine to be a decent donor bike – unless you are Douglas Paijo from Indonesia. After many years of owning the bike he had an unfortunate accident and thought his dreams of turning it into a ‘Brat Style’ custom were ruined. “I had a terrible accident on the bike last year” Douglas told us. “An old man with a Honda Supercub hit me from the left side at an intersection. It was almost midnight, and he had no lights. My bike was damaged badly, I lost my gas tank and the left side was completely broken. Fortunately, the frame was OK. My friends suggested I sell the bike, but i had so many beautiful memories with it. I have no car so when my wife gave birth to my first son, we rode the bike to the nearby hospital. It was unforgettable. So, i decide to customized it”.

Douglas enlisted the help of his good friend Andi who runs a small custom shop in Yogyakarta in Indonesia, and together they went about doing a complete makeover on the bike. “The Suzuki EN125 is a pure sport road bike, but i want a different look for the bike. I want a simple, clean bike with good handling and fun to ride. I stripped down the bike, chopped the rear end of the frame, made a new seat and put a Suzuki GP100 gas tank on. I like the bobber look, so i wanted a fat tire for the bike and found a 130/90 15″ tire but unfortinately it was too hard to find the suitable rim here”. Due to Indonesia being limited for motorcycle parts Douglas did what a lot of Indonesians have to do and become resourceful. “I ended up using a VW Beetle rim for the rear wheel and luckily had no problem finding the front one”. As time went by Douglas received more and more parts from his friends. “I had a 38mm front fork which taken from a chinese’s Loncin sparta trail 125cc bike and had to shorten it to get a nice look. Andi made the front and rear fender. More than 80% of the parts I took from OEM spare parts. I believe that the quality and durability of the parts will give me more rather than if I use after market parts”. Douglas also pulled a lot of parts from other bikes, like the headlight is from a Honda CB100, a rear stop lamp taken from a Suzuki RV90, and the Handle bars are from a Honda GL200. “I also picked up a series of signal lamps from Kawasaki KLX 150, a classic speedometer from an old Suzuki cub and Andi fitted an old Honda CB125 muffler”. The last thing they did was paint it. “I loved the gas tank and I wanted a suzuki classic colour on the tank and I found one. The skull cartoon is the choice of my son Guilermo who is 4 years now. We love to ride this bike in the afternoon, with the approriate safety gear, he sits on the gas tank in front of me. It’s not a fast ride if you want to know, of course i don’t want to put my son in danger. We usually ride in the country side at the weekend. I know that he will love to ride as his father.”

Now I’m wishing I took my pregnant wife to the hospital on my bike – maybe the next one. What a great story, and it says a lot about the differences in cultures around the world. 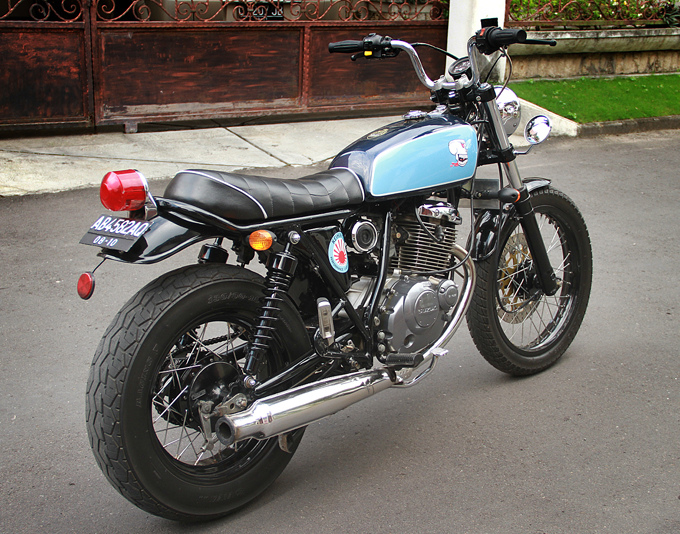