Todd Blubaugh is one of those guys you hate. He is very talented at what he does, he loves his job and he gets paid to fly around the world taking photos of models, snowboarders and motorcycles. We came across a trailer for his documentary a few months ago called ‘We R Winning’ (he was winning way before Charlie Sheen) and loved what we saw. The series is all about different people’s experiences with motorcycles and how they’ve changed their lives. Of course, when we originally tried to get in contact with Todd he was in China on a job. But as soon as he got back, he answered a few questions for us:

Born 30 years ago in Mcpherson, KS (literally the middle of nowhere, look it up). My parents were amazing (still are) and recognized my passion for motorbikes early on and allowed me to ride as a youngster (thanks Mom and Dad). They made me go to church when I was little and the only way they could get me to sit still was to have me draw pictures of motorbikes during the sermon… So I went to school for art. After graduating from the University of KS I moved to Seattle WA where I live now and have WAY TOO MANY (yet somehow not enough) motorbikes. I have a full time job working as an artist for a great company, K2 Sports, and I make movies and motorcycles with my friends in my free time. I also like kitties. That pretty much covers it. 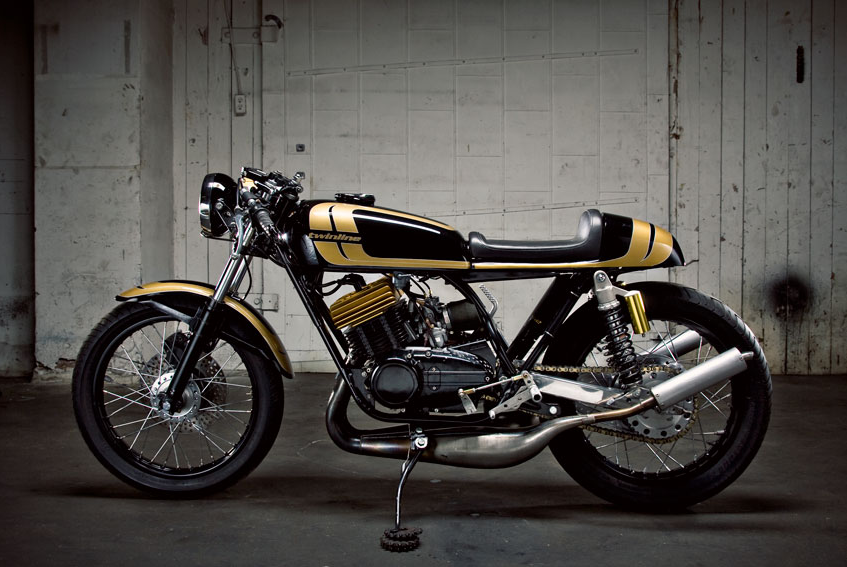 You have shot so many beautiful bikes. Have you got a favourite?

I think that would have to be the Goldhead (pictured above and below). It’s an RD Twinline built a few years back. It’s the best café job I’ve seen so far. Really sleek lines. They just finished an S1 Triple that I’m excited to shoot. It’s a real head turner. I plan on doing a pretty special shoot for that bike so keep an eye out. 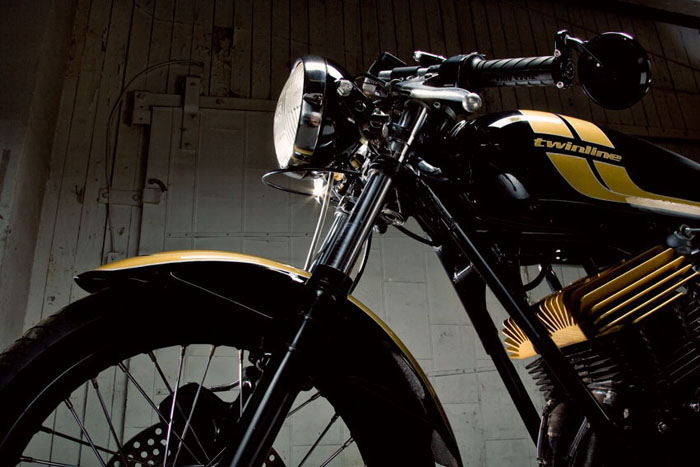 You shoot a lot of bikes for Twinline. What is your relationship with them?

It’s kind of a long story. I’ll try to articulate …

I see Twinline as a natural step in the evolution of the culture. It’s always changing. Ian (owner) keeps it operating with an organic process. It has evolved from a shop into a brand all the while remaining open as a clubhouse. It is a support system for people like me who want to learn or need an escape.

I met Jeff (Tower – manager) and Analog roll’n around Seattle one summer and they introduced me to the shop. Ian gave me a key after I spent enough time help’n out. I ended up building my XS 400 there last year and got to know all the guys. Now we are on big family. Sometimes a dysfunctional family but what family isn’t, eh?

Shooting our finished products was a way I could help out considering I do it for a living. I love pictures and motorbikes so I was happy to provide if it helped pay the rent. 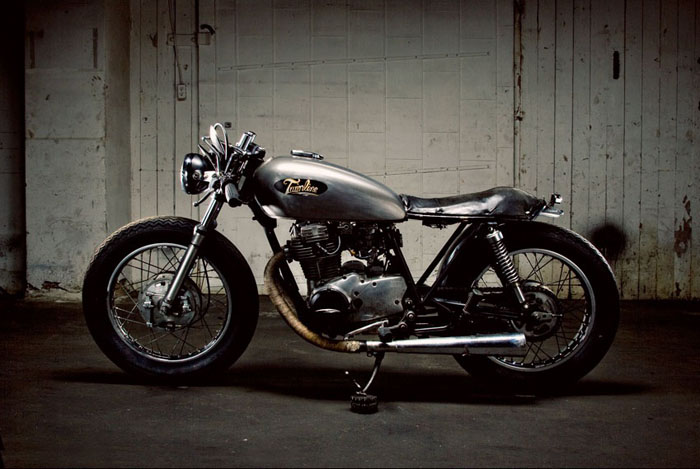 What is ‘We r Winning’? How did you come about making the film? What was the inspiration?

We R Winning is a definitive series of documentary films that explore the literal and figurative places that motorcycles have helped people discover.

The inspiration came from all the amazing stories I’ve heard passed around the shop. So many of them are full of wisdom. My goal is to give these characters a venue to tell their tales so they can motivate other people the same way they have inspired me. Motorbikes are just a symbol of the bigger picture… The real subject matter is passion. I’ve collected six stories to tell that will make up the series. Introducing Twinline is the pilot episode. I used the shop because first because it was accessible to me while I was still getting to know the guys. So the interviews were honest and came pretty naturally. They all gave me so much good material. It was tough to edit that project down.

The music really helped the success of this picture. Spencer Moody did the intro song (which was dead on). The super talented David West composed the amazing underscore. During the process I’d send him a cut and the next day he’d send me a piano track to audition into the picture. It was a really rewarding to feel the sequence come to life with Dave’s music. Thank you Dave.

My buddy Josh Lane helped me produce the project while Connor Hair and I shot it. The three of us made a number of projects together that year but this one was the most fun.

What other projects are you working on?

I’m working on the other 5 episodes right now. It’s a hell of a lot of work :/ I need to raise some serious cash to finish by the end of the year. As far as bike projects, I’m working on a 75 XLCH. It’s my first American bike. I traded my buddy an FZR for it. My goal is to be finished by July. It’s coming a long nicely. Nick D is working on a similar project right now and we plan on riding south as soon as the bikes are road worthy. Other then that I’m just trying to find more ways to spend time with my friends. I don’t want to be one of those lonely old motorcycle dudes living in a trailer surrounded by rusted old motorbikes. No offense to anyone. It just scares me a little cause I’ve seen the writing on the wall. 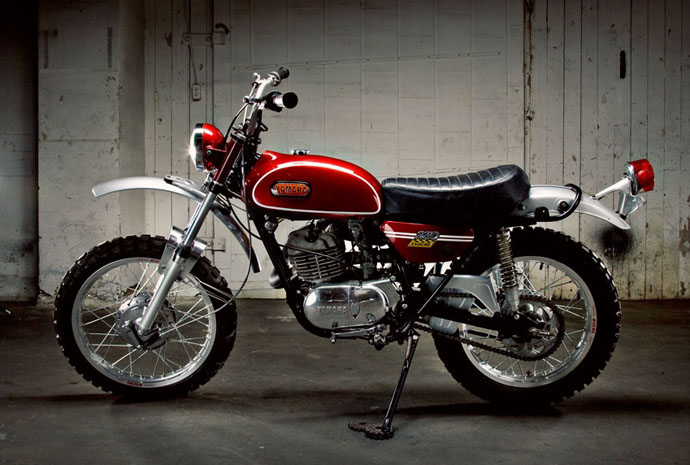 What bikes have you previously owned? What do you ride now?

My first bike was a KE Kawasaki. After that I got DT 125 and rode it for years. In college I started riding road bikes, got an FZR then a FJ 1100. I moved out to Seattle from KC with the FZR and got a KZ 750. Now I have The XS 400 (my daily driver), the KZ, a GS 550, and finally the Ironhead project. But now I really want a TT so I might have to get rid of something to accommodate for that. I have a one in one out policy now that Jeff and I live together. We had to start putting bikes in the living room. Good thing my girl moved out I guess, eh? 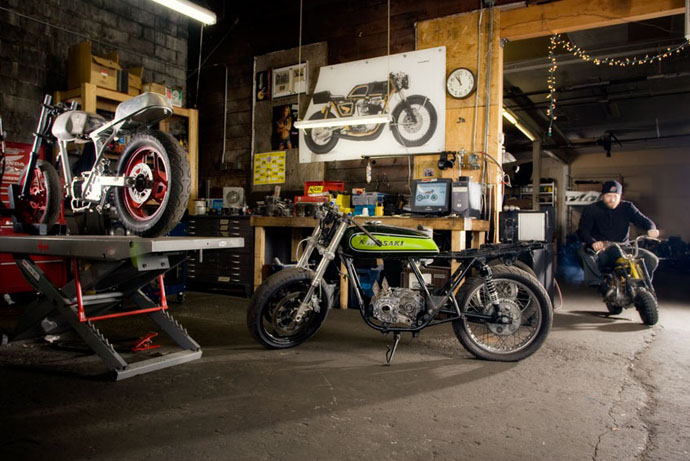 Any last words of wisdom for the readers of Pipeburn?

Three things I try and remind myself constantly…
– Don’t take yourself too seriously.
– Be patient with your friends.
– And teamwork makes the dream work 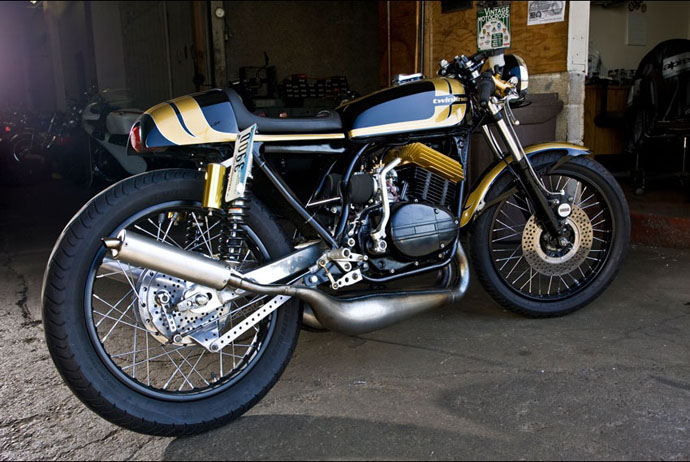 PS.The film will be screening in NYC at The Shop in Brooklyn, 290 Metropolitan Avenue, Brooklyn, NY 11211 (between Roebling & Driggs) April 10th, at 6pm.