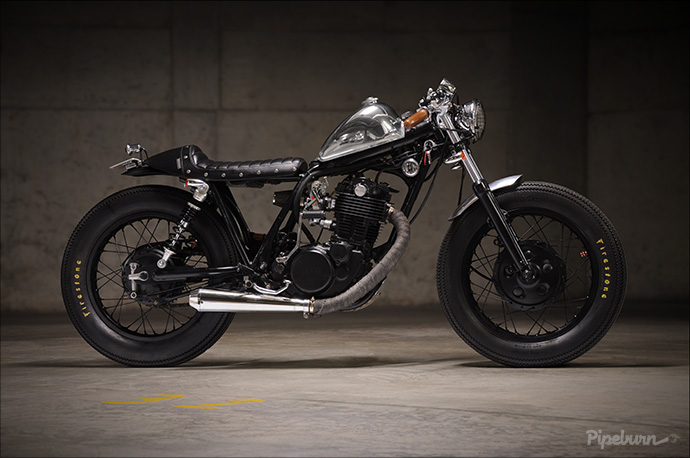 Woah. Wait just a single freaking minute here, talkative email dude who is surely trying to have a comical lend of our senses. Did you just say “an SR with a MONKEY TANK on it?” 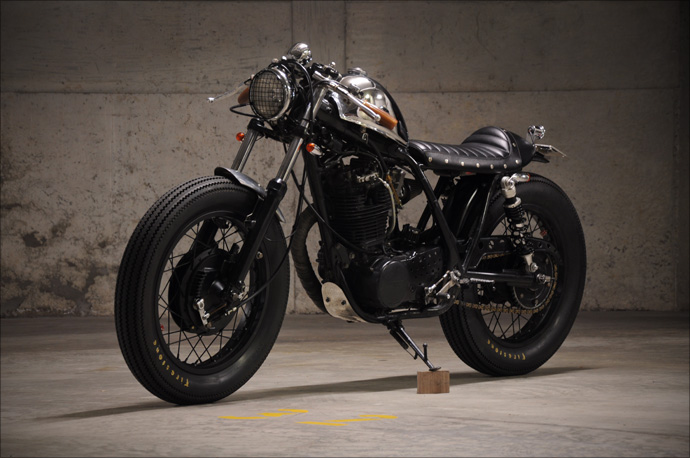 My name is Mark Hawwa. I am a father of none that I know of. I am an enthusiast of anything that is classic. Whether that is classic cars, classic bikes, classic typewriters or classic phone boxes. Slightly weird? Fuck yeah. I am an opportunist which will be clearly shown in the rear shots of this photo shoot. SCR stands for Sydney Café Racers. It is a project I started thinking about a little while ago and have finally got around to implementing. It is a group of Sydney-based café racer enthusiasts who blog, talk shit and ride every month; sometimes more often. Bring on summer! Check us out on facebook or at www.sydneycaferacers.com 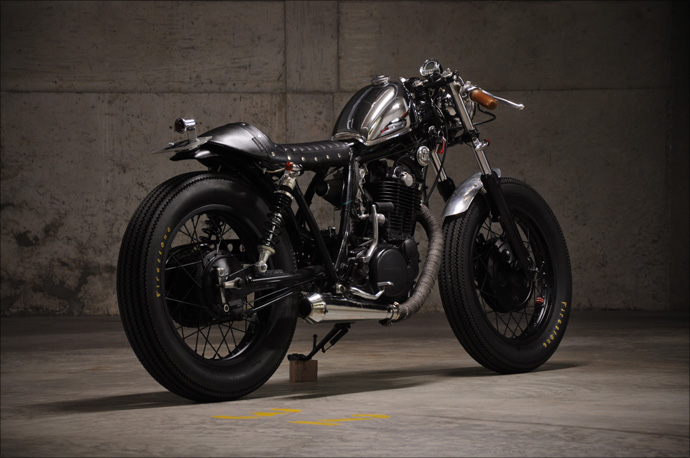 Tell us a little bit about her.

She is a volatile, rude and abrupt bitch; but I love her all the same. She’s a 1985 Yamaha SR500. Only my second bike and the purchase/modifications where influenced by 4 weeks I spent all over Japan in 2010. Shinjuku, Tokyo is the exact place where I fell in love with the SRs (some of you probably thought I was going to say strippers.) They can be found in every crack and crevice (SRs, that is) in Tokyo and no two that I saw where ever the same.

It started off as an Ebay auction with an over-inflated price tag. Common, I know. I knew it was a unfinished slapper so once it didn’t sell I got in contact with the owner and brought the price down significantly. I rode it over the Sydney Harbour Bridge back home shitting myself because I didn’t expect it to have that much go as standard and didn’t expect idle to fluctuate randomly between 1000rpm and 2000rpm. Upon reflection, Mark decided a gun show would be the best course of action

Over the next 8 months the fun began. I could have left it as it was but it wouldn’t be truly mine.  I’m still overly cautious about telling people I built her when they ask because I feel like I’m lying so I’ve come up with the phrase of choice. She was an unfinished project. In my eyes she needed a lot of work to be of the performance, quality and quirkiness I would be happy with. 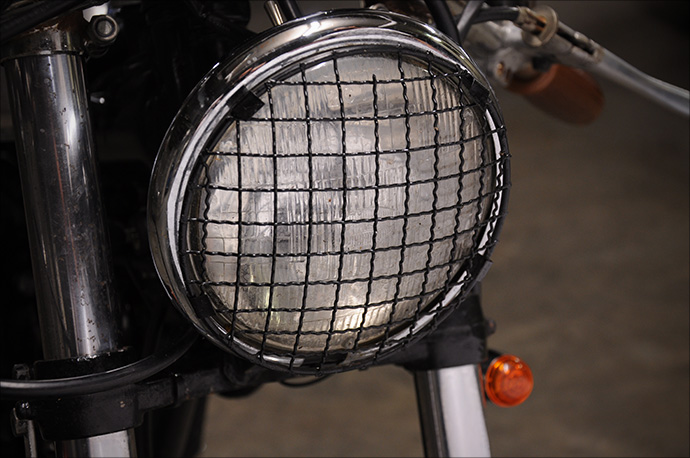 The first modification I did was upgrading the standard carburetor with a Keihen FCR 39mm. I remember the boys at Scott’s Motorcycles feeding me with caution. I should have listened because I don’t think I have ever shit myself so much when I took off at the first set of lights and the front wheel jumped straight off the ground. It was in my ‘hood and I’m sure the people in the next suburb could hear me scream “OHHH SHITTT!” while throwing my body weight over the monkey (that’s what she said – Andrew) then pissing myself laughing with excitement. 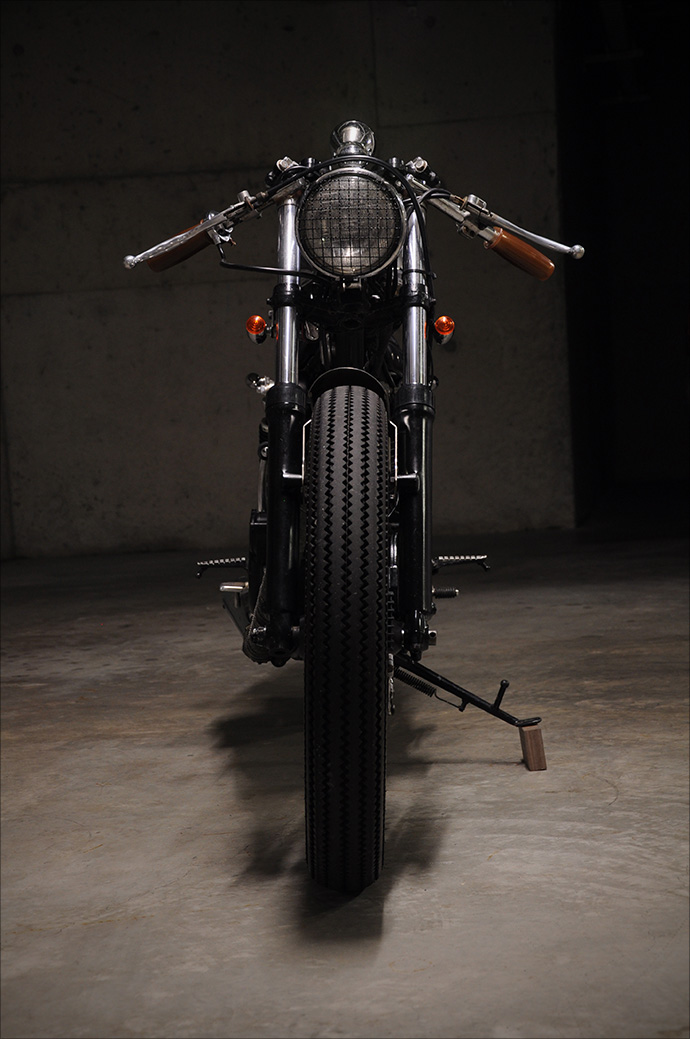 The front fender was dented and scratched when a lady reversed a mate’s 883 into my bike while having a coffee on the National Park run south of Sydney. The Yamaha held the 883, which was quite a sight to be seen. (The only damage was a scratch and dent from the indicator mount being weakened and breaking off 30km later.) From the point of impact the Yamaha was infected with a Harley disease which resulted in the YAMAHARLEY rear fender. Well actually my rear shitty alloy fender was torn to two on the pipe burn ride day. WELL WORTH IT. I had been having problems with the mounting of it for ages due to the heavy tail light and after trying 4 different ways of reinforcing and mounting solutions it just didn’t work. So it was time to go shopping – I went to a big Motorcycle Accessories Superstore in Sydney’s west and picked up a Harley Sportster front fender and mounted it to the back. I learnt my lesson. Steel vs. alloy? Steel wins! 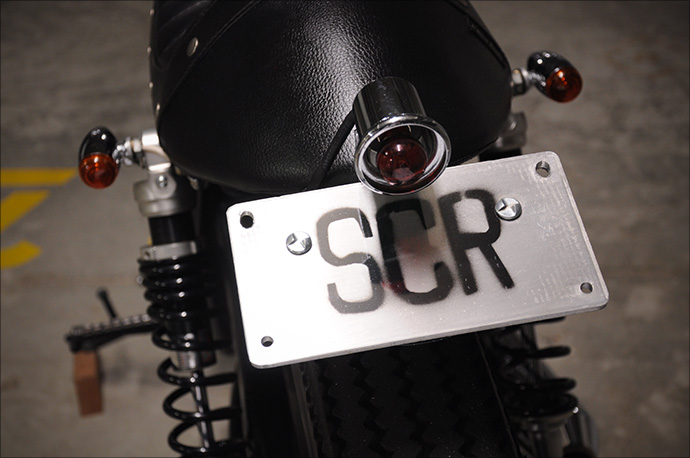 That’s Sydney Cafe Racers, not to be confused with the popular Sydney Christian Rockers

There are quite a few quirky additions to the bike as well which where relatively inexpensive. The rear lens of the tail light was removed and the clear light bulb replaced with a red light bulb that is way too big for the housing. It makes for an even more naked and basic bike and in all honesty one of my favourite parts. The tyre valves have got some dice on them which I bought from Japan, and the front headlight was fitted with a truck headlight mesh I picked up for less then $10. The Firestone logos were painted gold using a felt pen with a bullet tip (but it is still painstakingly slow). Gum handle grips look sick! Even if I say so myself… 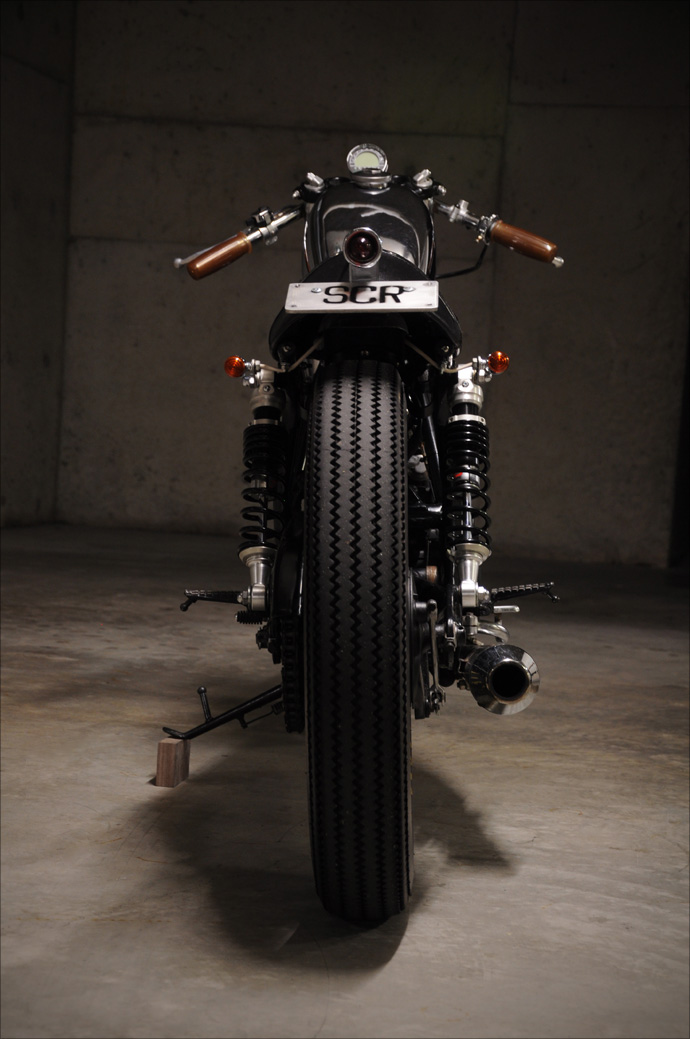 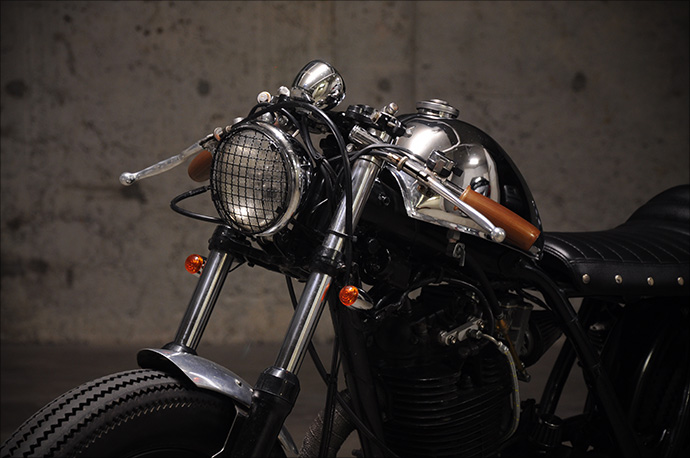 Anything left to do ?

Replace the scratched and dented front fender and she is finished. It’s sort of a strange feeling thinking that I don’t need to replace or modify anything on it anymore. I am finished. I enjoy my hours off work playing with cars and bikes and now I am at that point where I am sitting here thinking I’ve got way too much free time on my hands again. Another project but from complete ground up, maybe? 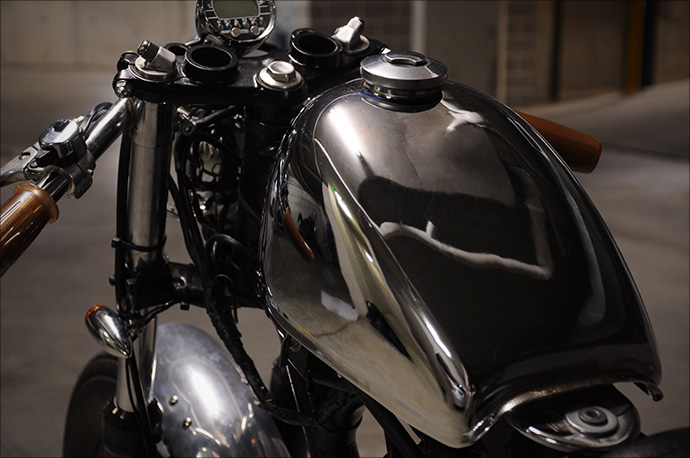 What would I do differently if I where to do it all again?

I would start from scratch. I think there would just be a greater feeling knowing that I had chosen every nut and bolt on the bike. I would feel more fulfilled I built her from the ground up starting with a frame and working through the rest. To me the true essence of a café racer is DIY & CT. Do it yourself & Cable ties. 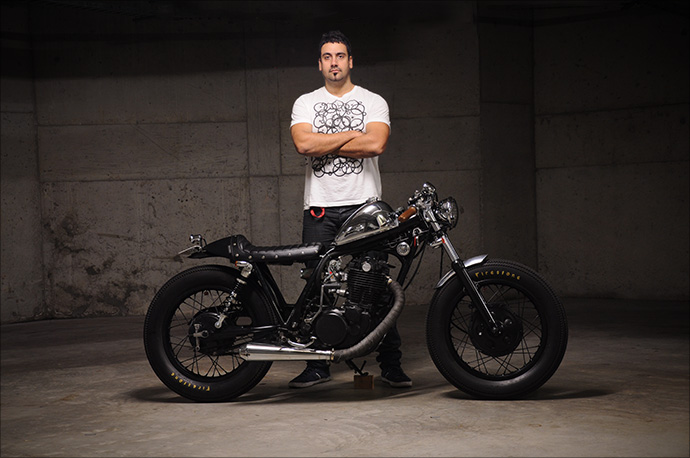 And they told him it couldn’t be done