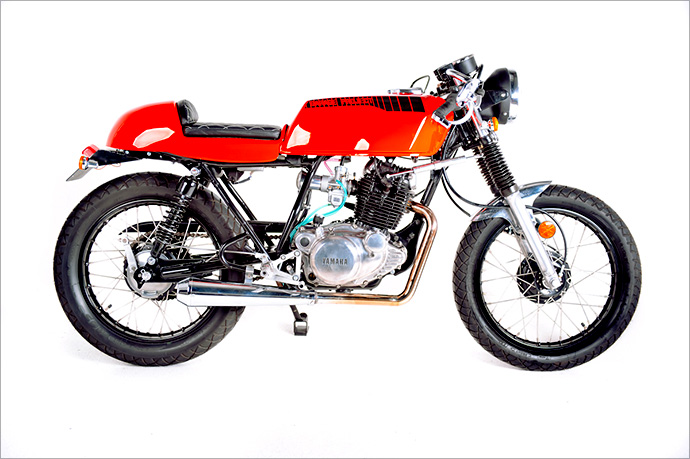 Of all the wonderful things that the internet has given us, you’d be hard-pressed not to admit that anonymous user comments are right at the bottom of the heap. It magically seems to be able to bring out the worst in us and will often turn a calm, rational, intelligent adult into a name-calling, boasting, irrational, long-winded idiot. Of course, the fact that you can do it with almost total anonymity is the main cause of all the trouble – it’s like the 80s equivalent of a prank phone call where you get time to rehearse your lines. In the midst of all this dissing and lowest-common-denomenatorism, it takes a brave soul to stand up and be counted. Our hats are off to anyone who puts their bike where their (keyboard) fingers are. And that’s just what our next builder has done. And do you want to know the real icing on the cake? He’s done it twice in one week. Assembled Pipeburn bitchers and moaners, behold a man who talks the talk and walks the walk. Meet frequent commenter Rex Havoc and his lunatic Yamaha SR 250. 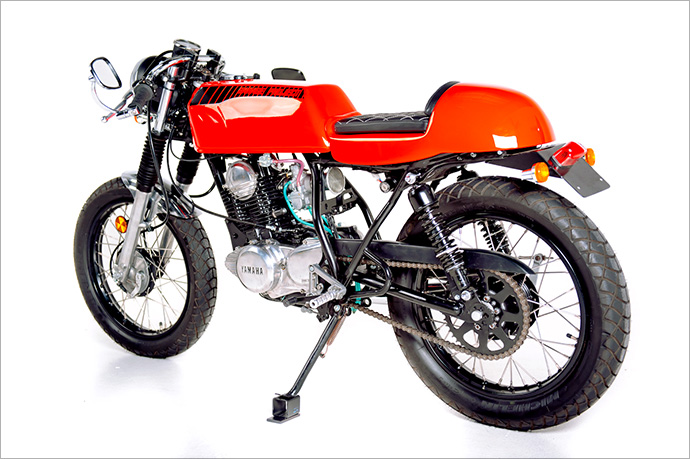 “My shop is called Garage Project Motorcycles which started in 2010 when my W650 cafe racer got soundly hammered by Brad’s (Rex’s partner in crime) W650 Flat Tracker in the cafe racer class at the Perth Jap Bike Show. We got talking during the day and decided we should collaborate on a few projects and see how they were received. Hey, if you can’t beat them, join them right?” 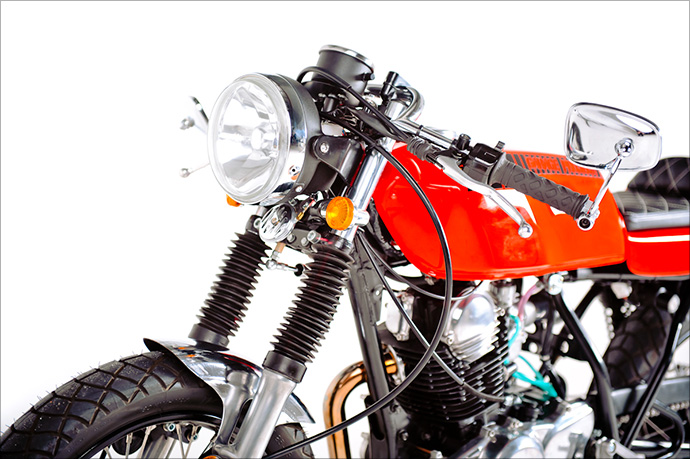 “I was following a build thread on the Perth Street Bikes and Do The Ton forums (as were heaps of other people – they were the most viewed build threads in both forums history) about the transformation of a basket case Yamaha SR250 into beautiful cafe racer. Ben (user name “Lunar_C”) had been working on the transformation for four years when on the 5th March 2011 he decided to swap piston rings for an engagement ring.” 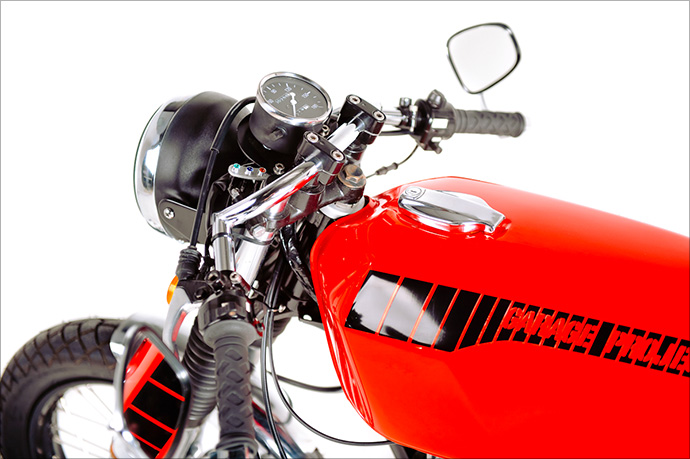 “Ben said ‘It is sad, if you think about the past 4 years I’ve spent working on it… but this year is going to be really tough financially with my clinical rotations (work full time as a nurse for 3 months, but don’t get paid) and I’m moving out… and hopefully popping the question, so working on this bike kept me sane enough to meet the right girl, and now as a final gift, selling it might be able to help me marry that girl'” 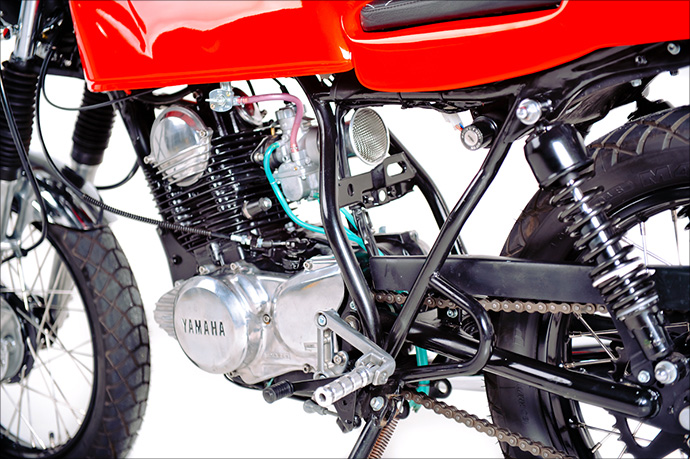 “Like everyone else who had been following the build we desperately wanted to see it finished and presented at the 4th Jap Bike Show three weeks later. We picked it up in our matching Red ute and hi ho, hi ho it was off to the garage we go.” 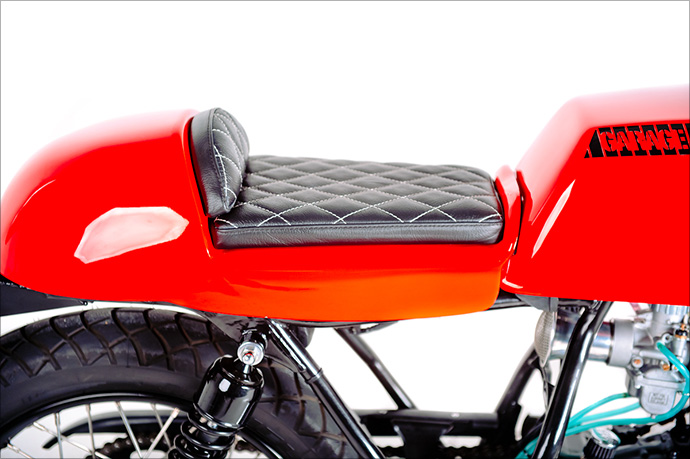 “The bike looked 90% complete but like all partly-completed projects there are always surprises. We also wanted to add our touch to the bike as well so we removed the rattle can silver wheels, hubs and spokes and replaced them with CB350 18″ rims that were powder coated black and laced them with stainless spokes. We replaced the carb with a new Mikuni item and dumped the pod filter for a velocity stack. We moved the ignition to under the seat and replaced the front brake with a twin leading shoe set-up. Then we fabricated a few missing parts, replaced the hardware store bolts, installed new switchgear and totally rewired the bike. We then made the seat and added the graphics.” 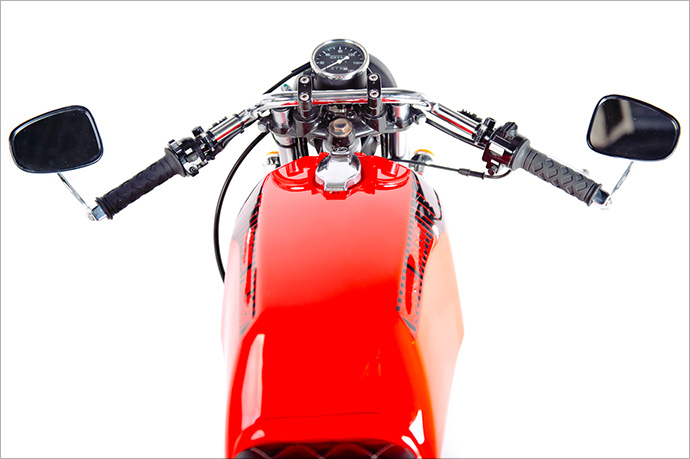 “10pm the night before the show and we were still putting the finishing touches to bike but it was all worth it as it picked up 1st prize amongst some really strong competition. Ben, well he proposed the night before the show. He’s riding the bike for the first time this weekend. We are reluctantly selling the bike to fund our best project yet – A 1974 CB750 Street Bobber “Mr Green”, which was named after my 3rd grade teacher who was a right bastard!” 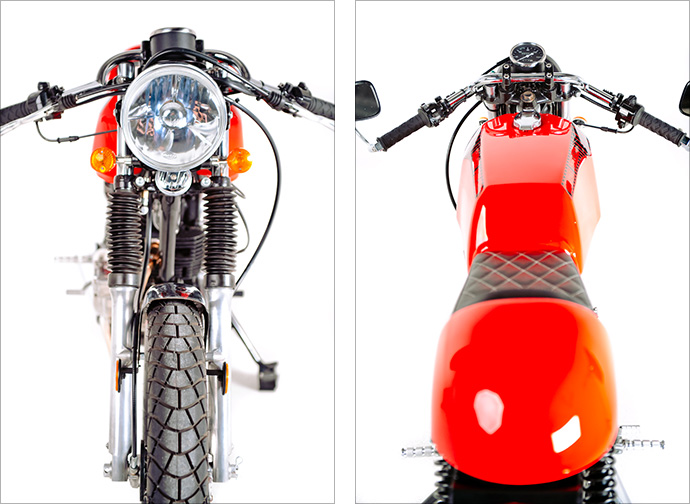 So next time you crack your knuckles and set about to flame some poor sucker because you’re not down with the particular shade of off-white that they have chosen for their pipe wrap, maybe the furious anger you are using to fuel your angry little fingers could be put to better use working on your bike. After all, just look at what can be achieved when you get off your computer and into the workshop.

(Big ups to Mark “Monkey” Hawwa from Sydney Cafe Racers for the tip.)