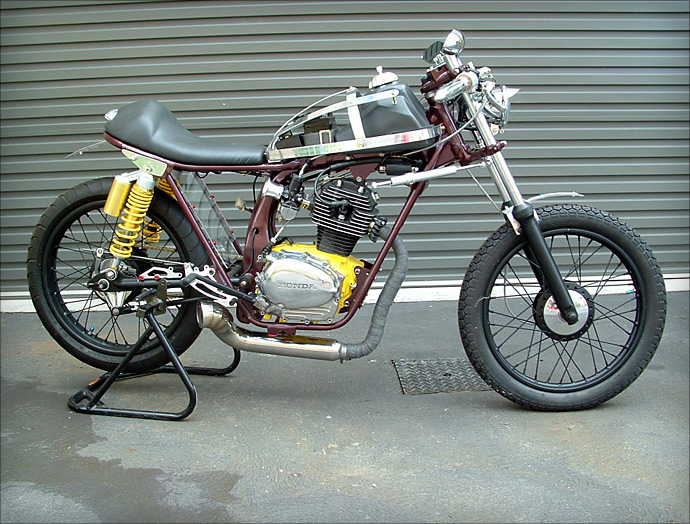 min·i·mus [min–uh-muhs] – noun, plural. A creature or being that is the smallest or least significant. Opposite of Maximus. Origin: 1580–90;  Neo-Latin, Latin: literally, smallest. 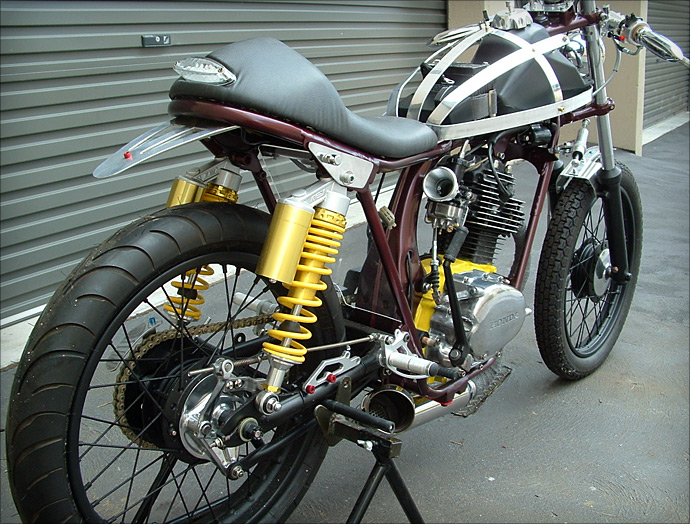 PB: Tell us a little bit about yourself.

GM: My name is Glenn McNaughton, I am a 1960 model and I live in Canberra, Australia’s capital city. Been into bikes all my life and have previously worked in the motorcycle trade for 20 years. I must admit to becoming a little jaded with the whole thing and changed jobs – spent a few years building a supercharged an injected ’67 Falcon ute. I got that out of my system and now have a revitalised interest in bikes. The plan is to build a few bikes over the next couple of 12 months and see how that goes, if it works out, I will do it full time. That’s the plan anyhow…

PB: Can you take us through the build?

GM: Pretty much the plan was to start off something that no one would think of turning into a custom bike. To that end I bought a heap of junk XL 100 which had been a farm bike all it’s life. After a tetanus injection, I spent a lot of time cleaning, sanding and polishing etc.

It was an inexpensive build money-wise but very labour intensive. In fact I only spent the equivalent of a decent weekend away for two! Further to this I wanted to do as much as could myself. In fact, the only two things I didn’t do myself was to weld the tags on the frame and fit the tyres. Everything else was done by me in a corner of a garage and it was built using basic hand and power tools. 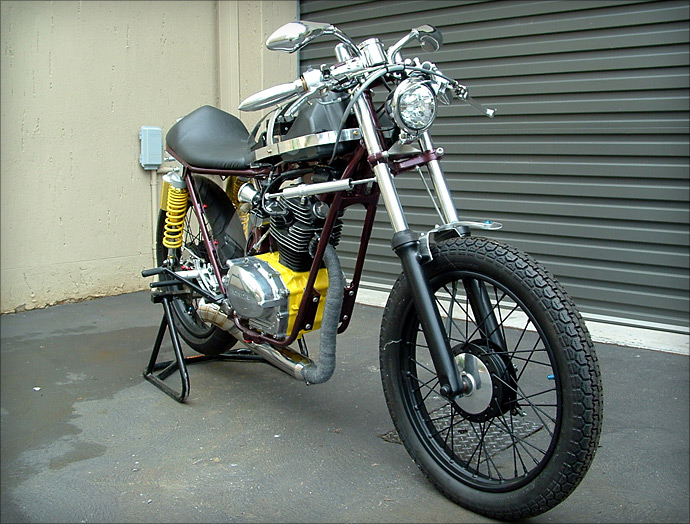 PB: Did you sketch, Photoshop, or just improvise while building?

GM: The plan for the bike and the budget was formulated in my head before I even lifted a spanner. I wanted to build something outside the usual formula of tank seat and bars, but still retain the cafe or racer style, but be original with a few twists. When building a project like this, I like to have a solid plan in place, otherwise it’s too easy to let it get out of hand and off track.

Unfortunately for me I cannot draw to a high standard, but the upside is that I have a very good imagination and the ability to retain that image in my memory as a picture. The bike turned out pretty close to what I had envisaged, with the main deviation being the colour choices. The colour of the shocks steered that one.

There a lot of handmade details on the bike as well as the obviously bought parts. All the parts were bought out of asia and strangely enough, were all very inexpensive. Throughout the build, I tried to be innovative and original. Eg; I used perspex for the inner rear guard, front & rear guard as well as the LH ankle guard. The tank skeleton was made using a length of 3mm x 30mm aluminium strip. I ended up with an alloy tank that cost me $18!

PB: Have you entered the bike in any shows?

GM: I haven’t shown the bike but I did have an entry to the Deus build off, which I unfortunately couldn’t attend due to the bike not being finished. No plans to show it – I sort of built it for myself and for a bit of fun. Though the general reaction to it has been a bit of a surprise. 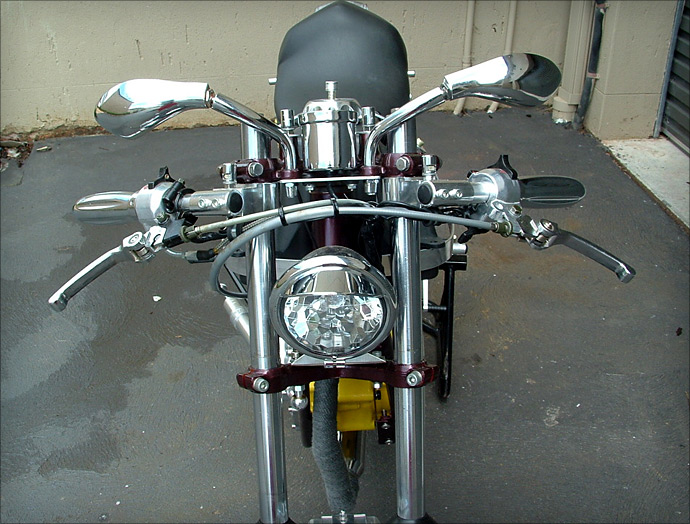 PB: How have the mods you’ve made changed the way the bike rides?

GM: Don’t really have an answer for this one. Obviously its completely different, but that’s not what it’s about. It’s more an exercise in what I could do with a bike that most people wouldnt even want let alone modify.

PB: Any lessons you’ve learnt from the build?

GM: All I can say to prospective builders, is be original and have a reasonably good plan and stick to it. Also just do a little bit every day, even if you dont feel like it, just do something. And don’t be afraid to try something different and be original. 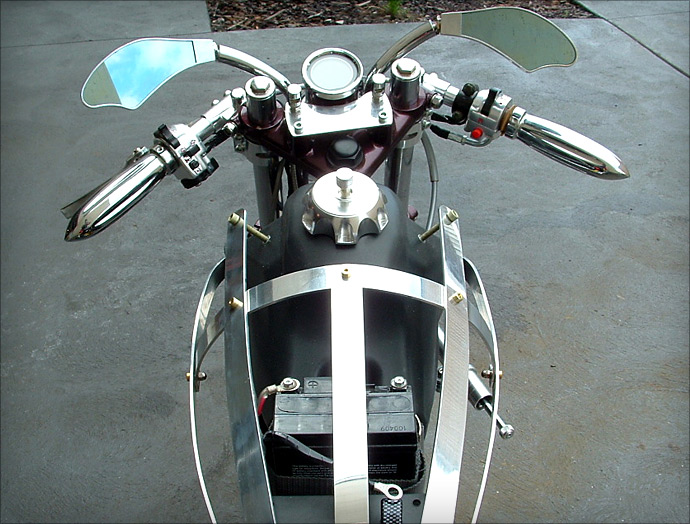 PB: If money was no issue, what woud be your ultimate custom bike?

GM: I pretty much have my ultimate bike and have had it for 30 years. It’s a CB900F I built in the late eighties. It has a heap of CB1100R parts on it. It’s 1062cc, has Moriwaki cams, Yoshi pipe, Ohlins shocks, ported, modded carbs, box section swingarm, twin headlights etc etc. There is too much done to it to list here. Although, in saying that, I have soft spot for CB400Fs and I plan on doing something special with a CB400F in the next few months.

PB: We can’t wait. What bikes have you owned before?

PB: If the bike had its own theme song, what would it be?

GM: It already has a theme song. It’s in the video. Lol. 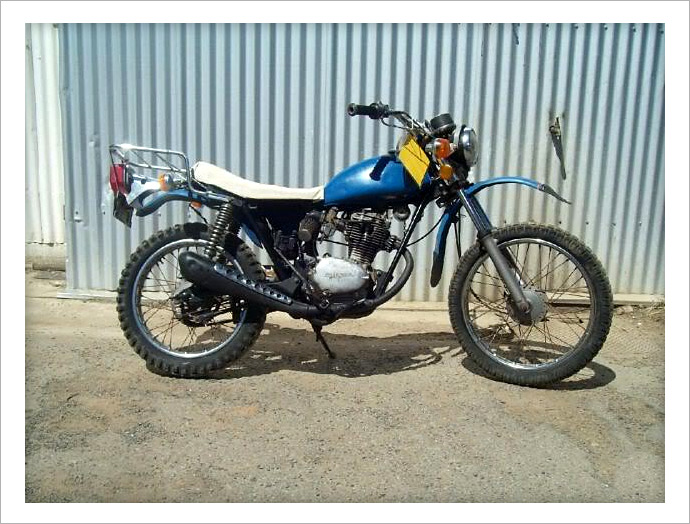 The original XL in all it’s dusty glory – but where’s the cattle dog?