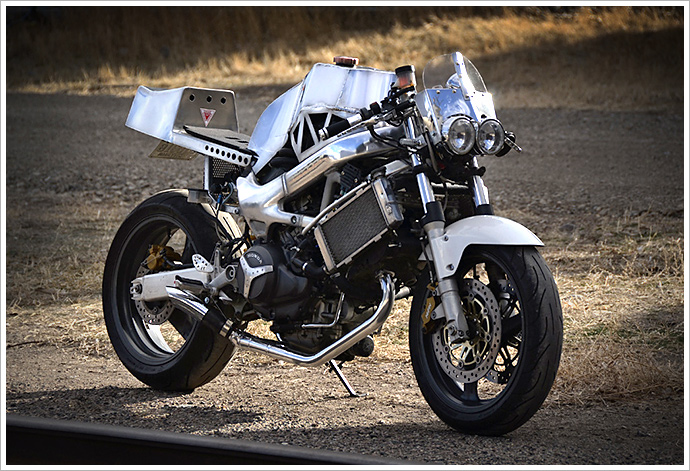 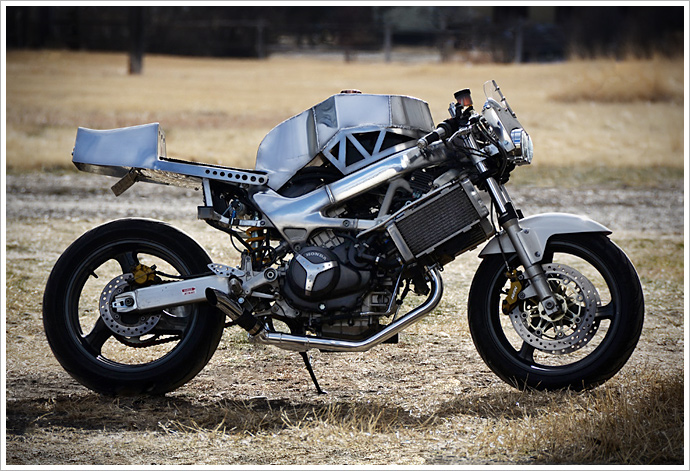 Take it, Tyler. “I am 29 years old, and I work as the service manager of an agricultural equipment dealership in Southwest Montana. I work on all bikes from a Harley stable to more traditional vein cafe bikes. The long winter here tends to drive me nuts, and forces radical changes to anything on wheels in my garage. I do most of my own work when (and as quickly as) I can; I have an aversion to sending out or ordering parts, and the huge amounts of time that that wastes. Sometimes it is inevitable, and I have been lucky to receive professional results in all the bits I have had to source from the outside. I try to note those responsible for those efforts.”

“The bike started life in Bozeman, MT as a1998 VTR1000F Superhawk (or a Firestorm outside the US). When new it lasted all of 6 hours, before being piled up in the fatal wreck of its first owner. It then spent a few years as a first class bodge job, used mostly as a commuter by the owner of the local Honda dealership. I purchased it two years ago to try to restore, and decided it was too far gone to do justice to that end. A cafe-esque naked treatment seemed to be the way to go. I installed the dual headlamp, rewired the bike, and popped on a Roc-City Dunstall seat. In keeping with a cafe theme, I dropped a significant amount of weight with full integrated LEDS, Shorai battery, and plenty of speed holing.” 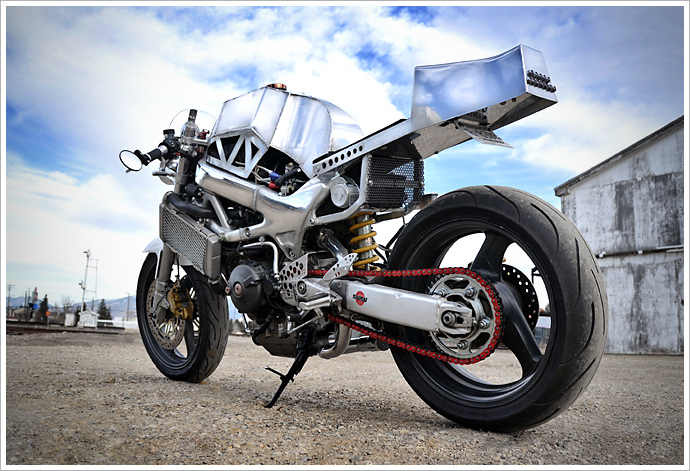 “A year after this incarnation, I decided to try my hand at aluminum fabrication in an effort to lighten the bike more. This resulted in the creation of the tank and mini fairing. The tank is styled completely out of my head (kinda makes you wonder what goes on in there, eh?) but the fairing draws its cues from early sport aviation and automobiling. With those bits done, I further stripped all the remaining emissions junk off, cut down the exhaust to a cleaner 2-1, and sent it out to be ceramic coated. I re-installed that with a short GP style can, much smaller than the original (heavy) stocker.” 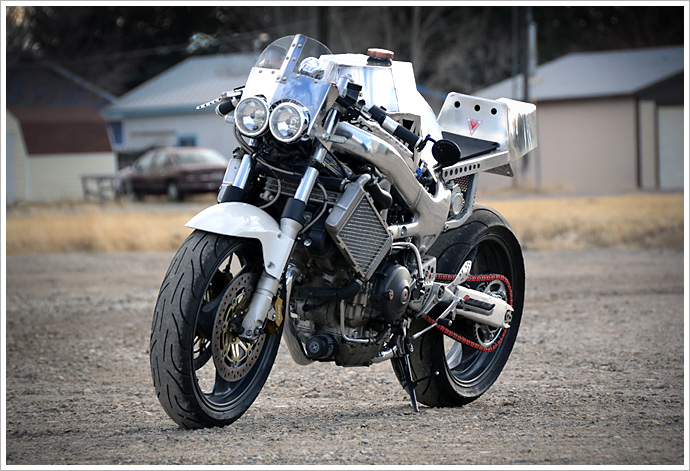 Like a FireStorm and the Bilbao Guggenheim had a love child

“Taking a breather and looking at the project, I decided that the attitude of this bike required a nitrous oxide kick. I had dynoed it previously at 96 horsepower, and in order to keep engine-wrecking to a minimum, I opted for a 20-30 adjustable setup. I set it up as a 20 hp boost, to hold the hooliganism to a minimum. In keeping with the post-apocolyptic, zombie-raiding attitude this build seemed to take on (of its own.) I used guarded switches and a few other billet bits for the nitrous controls. The 12oz bottle fit neatly in front of the uber-small Shorai battery with a modified grease gun clamp, and kept everything tidy. I did a minimum of detail work, including lock wiring, and jet aircraft warning stickers – including a ‘Danger – Ejection Seat’ one.” 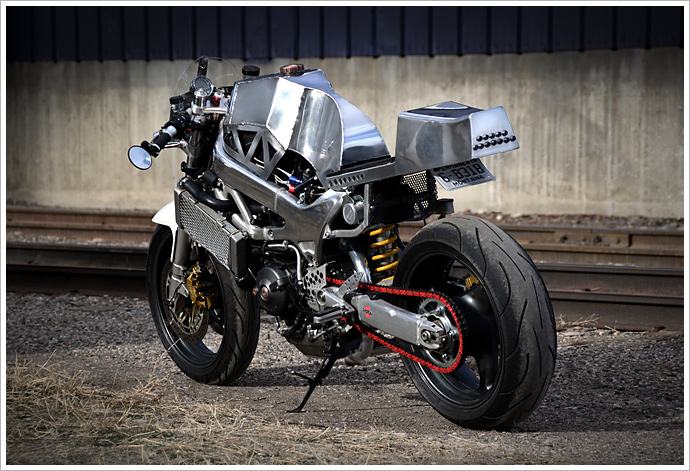 “Ultimately I met my aggressive weight loss goals, bringing the bike down nearly 50 pounds to a neat 393 pounds (178 kilos) wet. After modifying the jetting to match the new exhaust, it certainly seems to defy gravity better. It is significantly louder than original, but as the guy at the gas pump told me the other day, “it’s loud, but it looks like it should be…” Nothing more to say about that. I named the build ‘Christine’ in honor of the car in the ’80’s horror flick, and because the build seems to be possessed of a certain… spirit.” 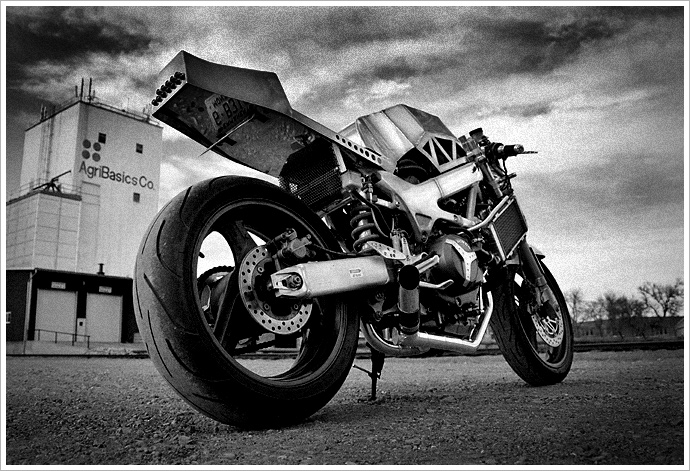 And there you have it – probably the strangest bike backstory you’ll ever hear. If you’re gagging for more details and wondering just how Tyler took Christine from killer to thriller (thank you – I’m here all night) why not pop on over to the build tread on the ever fecund Do The Ton forum.