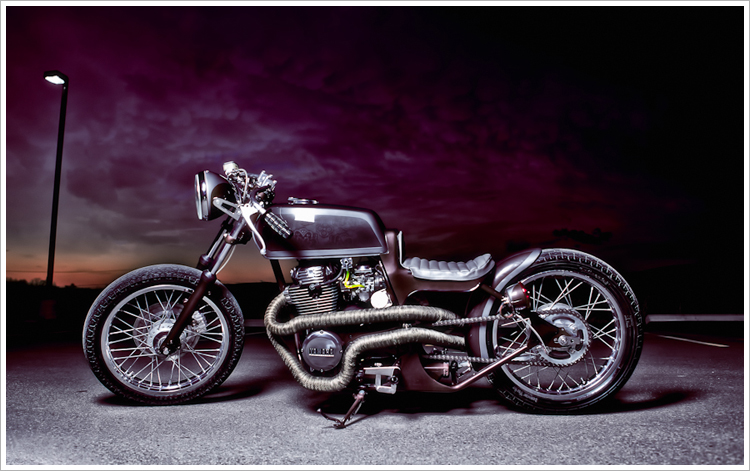 We love boredom. Boredom can drive a person to do some crazy things. Sometimes boredom can get you into trouble. Other times boredom can motivate you to create something unique, something out of the norm. That’s exactly what happened to Mike Busch, a 26 year old Hot Rod builder from Pennsylvania. His original passion is building Hot Rods, which he’s done for years, but he recently decided to do try his skills at building a bike. “I literally got bored one day” says Mike. “I searched Craigs List for cheap bikes with potential and came across this XS”. Mike is one of those guys who has always tinkered with things, even working at a motorcycle shop where he learnt a lot of the skills he used to build this bike. This is Mikes first custom build under his new shop called Bombshell Customs Cycles which is already gaining attention from around the world. 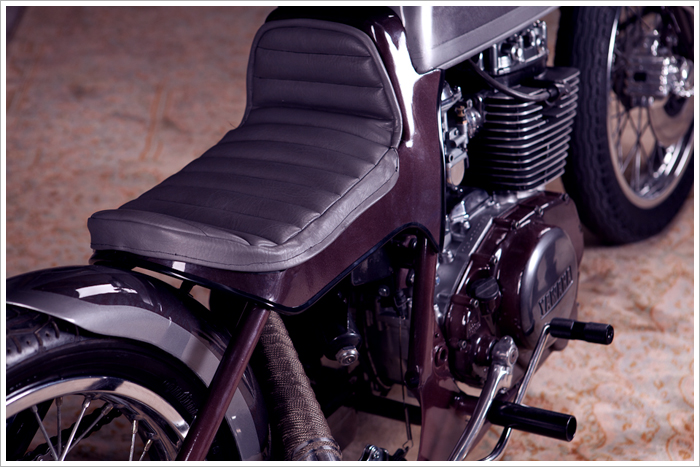 “After finishing up some other work I had at the shop” says Mike. “I ripped the bike apart. In a matter of hours it was down to the bare frame. That’s when all the ideas came. It almost ended up as a stretched rear with the dual shock setup but I wanted to do something different. Go hardtail but not typical. Instead of triangulating the tubes under the seat like most rigids, I ran them straight into the mid tubes. I think that’s where the whole look of the bike changes compared to other hardtail bikes. It was a pain in the ass trying to get the seat just how I wanted it. You can see I “pulled” the sides of the seat pans down and gave it some lines that match the lower frame gussets. The bike kind of has sectional focal points. I like that. It’s not overdone or too empty.” 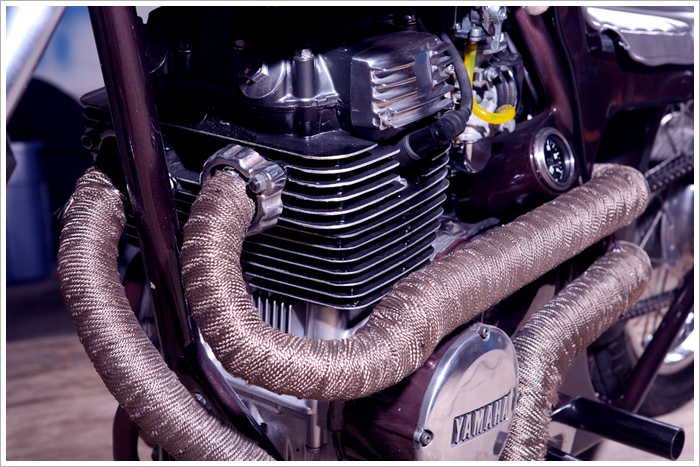 “All of the electronics for the bike are neatly packed under the seat. As the bike was coming along, I took notice that it was becoming something I didn’t even picture. It was like a bobber fucked a cafe racer and gave birth to a boardtracker – or something like that. I didn’t want to go crazy with the front end by raking it out or dropping the forks. So I cut the neck, added about 8 degrees and re-welded. Also added some gusset plates around then neck for support and to clean up where the neck meets the downtube. I also gave the tank a 2” lift in the rear to dramatize the way the seat sits. I utilized as much as possible from the original bike. The only new parts I bought were a tail light from pep boys, a new headlight and throttle kit from Dime City Cycles, and bike pegs for the foot controls. Everything else, including the paint and pipe parts where laying around the shop. Believe it or not, those handlebars are from a 1950’s Columbia bicycle I found on the side of the road. As soon as I put them on, I knew they were staying.” 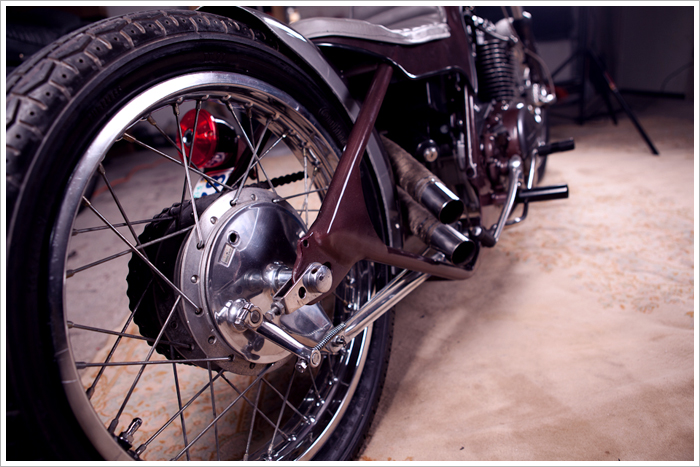 “I would say the things I am most stoked about on this bike is the laced paint, the pipes, and the overall look of the bike. It’s unlike most bikes, but it works. The paint was originally going to be basic and clean. Black frame and scalloped tank with a matching fender and headlight, or something like that. But the more the bike came together, I felt it needed something special. I remember seeing some old hot rods with the roof and hoods laced. I figured that would be perfect. In reality the paint was an experiment. That’s how I do a lot of my custom work. I wanted things like the lace and certain colors to be subtle while other things “popped”. After everything was painted, I came up with the idea of tinting the clear. I used a bit of black metallic, pewter metallic, and a touch of forest green metallic in the clear.” 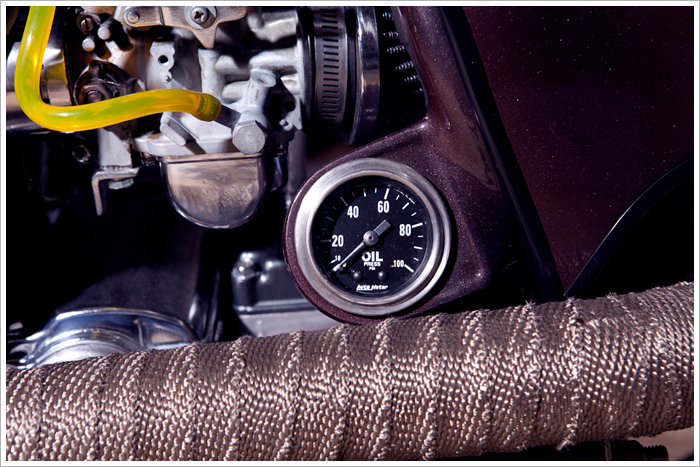 “The pipes were something I have always wanted to do that way. I wanted “over one side, out the other”. It was a bitch working around the chain, but I managed. They are wrapped in DEI’s titanium 1″ wrap. The color was a perfect contrast to the bike colors. Plus like I said before, everyone one does the same shit. If I’m wrapping the pipes, they going to be different.”

The pipes weaving under the seat is a really neat idea – even though they do look precariously close to the chain. This may sound like a cliche, but if this is Mikes first build then we can’t wait to see the next bike that rolls out of Bombshell Customs garage – no pressure Mike. 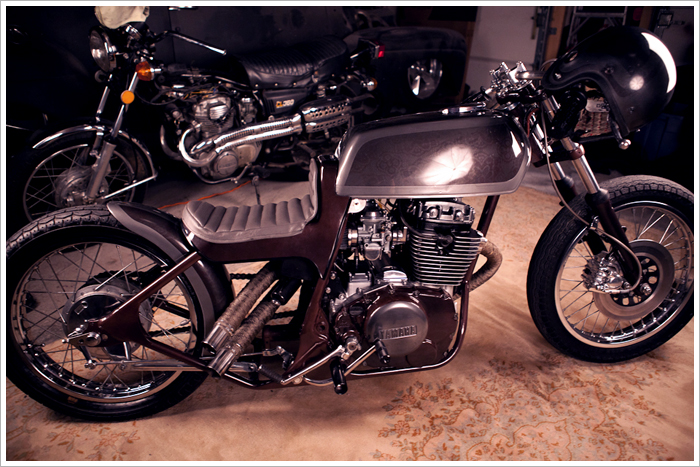 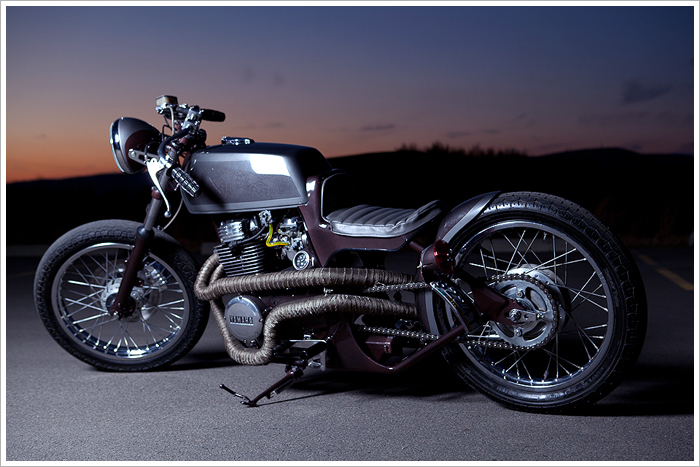