America putting a man on the moon in ’69 was a big achievement in a veritable cavalcade of different areas. Obviously, it was a technical achievement par excellence. It was also a giant step in exploration that made previous earth-bound heroes like Columbus and Cook look like they were out for a Sunday ride. Then you have a raft of other firsts including speed and distance records and the like. But one thing that is rarely talked about in relation to the mission is it’s enormous breakthroughs in the field of throwing common sense out the window and doing shit because it’s obviously just so damn right. Most bikers will know that feeling all too well; as we all know there’s a certain level of putting your fate in the hands of the gods that must be embraced before anyone can really ride a bike in anger. Which also makes very little sense in the cold, hard light of get a job and do what you’re told. But what if you were to do more than just ride bikes? What if you were sitting down for a beer with a few mates and you decided that from that point on your lives would never be the same again? What if you decided that the drunken idea you just had wasn’t going to be forgotten the next day but actually acted upon with all the vigour you could muster? Welcome to the world of Cheezy Riders, a bunch of guys who acted on a whim and made one giant leap for mankind. And cheese, too. 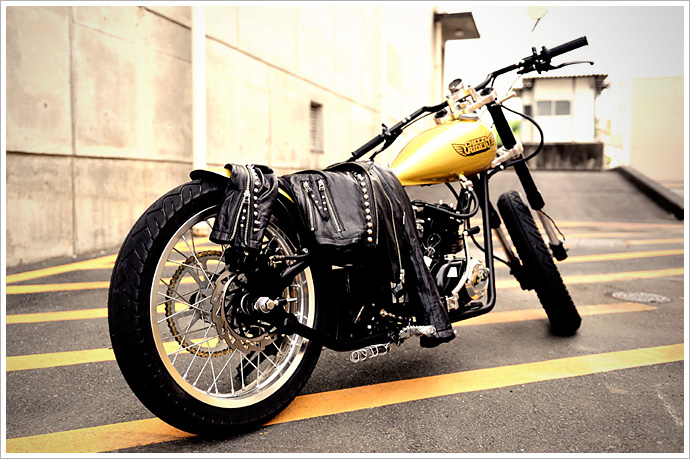 Over to Neils. “It all started three year ago. I was sitting in a bar with some of my Buddies and we talked about our lives and what we want to do before we leave mother earth. There was a bunch of crazy stuff crossing their minds but one thing really was on the top: they all wanted to ride a old school Chopper through a unique country with endless roads and breathtaking nature to search for freedom and adventure. Just like Dennis Hopper, Peter Fonda and Jack Nicholson back in the days in legendary road movie “Easy Rider – except we wanted to swap New Orleans for Japan.” 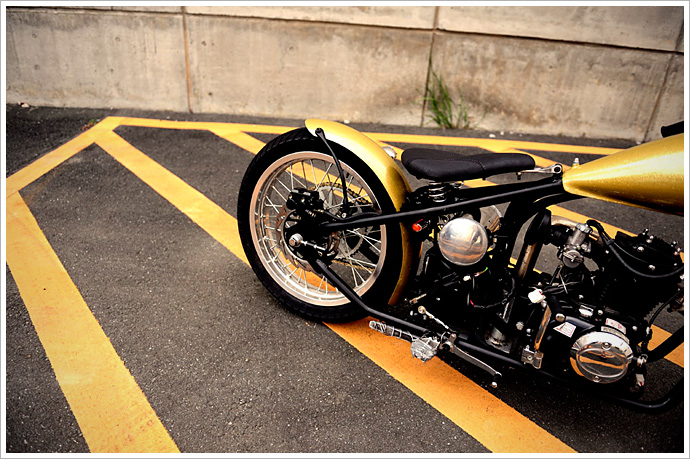 “But there were a few problems that made the dream unreachable, none of them had a motorcycle license to ride a classic chopper and none of them had the money to build their own big size chopper.” “The solution lied in 50cc Motorcycle, those bikes could be driven with a car license and that way they had a chance to make their dream come true. It is not about the size of the engine, it is all about the adventure. Don’t dream your life, live your dreams! Cheezy Rider is about living your dreams instead of dreaming your life.” 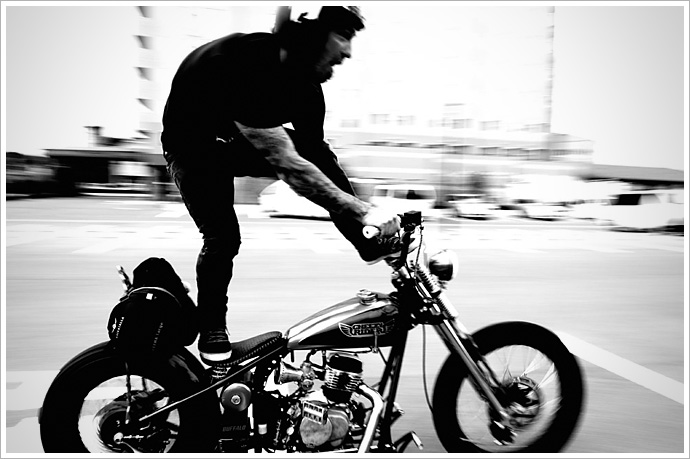 “Almost every Person in the world has a dream or a passion. Only a few get the chance to live their dreams! Cheezy Rider shows how to make your dreams come true, if you only think a little different, because most times happiness is right in front of you!” 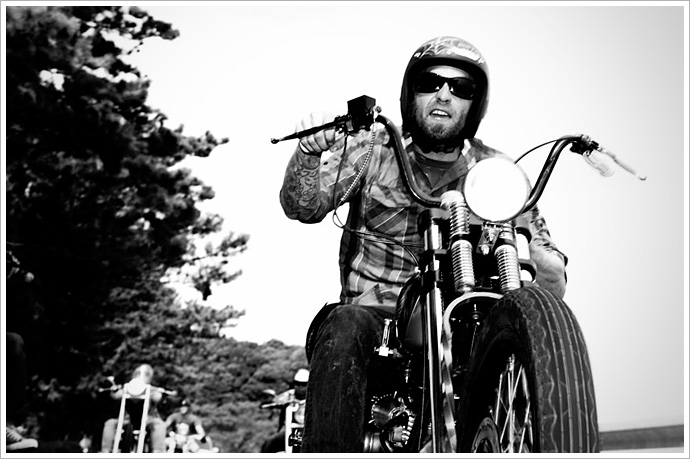 “I don’t care how cool it’ll look, I ain’t doing no up-skirts photos”

“For the Cheezy Riders, it is all about to live the feeling and not about outward appearance. Realizable for everyone!” 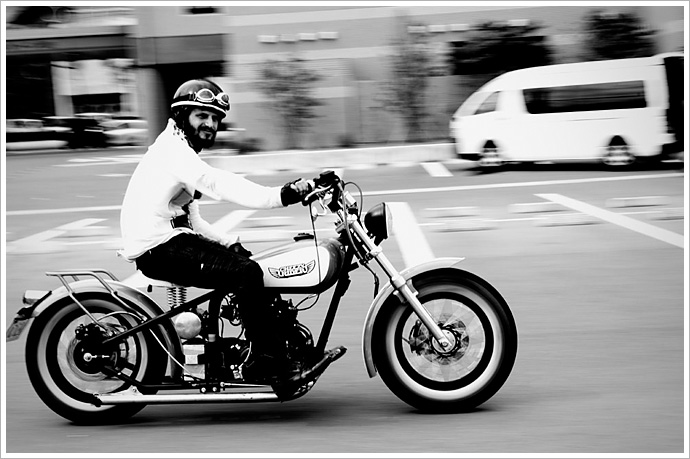 “we are planning to open up a flagship store
with a workshop, bar and showroom”

“Today we have a nice little garage and we build custom mopeds from 50ccm up to 200ccm and are going into Production. In June 2012 we are planning to open up a flagship store with a workshop, bar and showroom. For that we have some great people who are going to join our dream and work with us.” 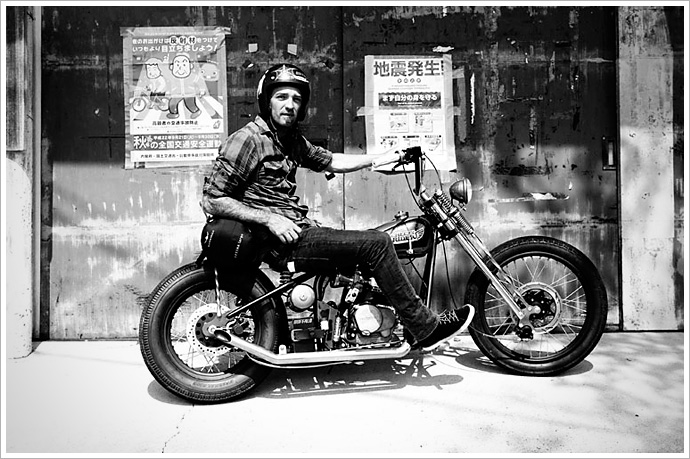 Sadly, the shop selling pedestrian crossing posters had closed by the time they arrived 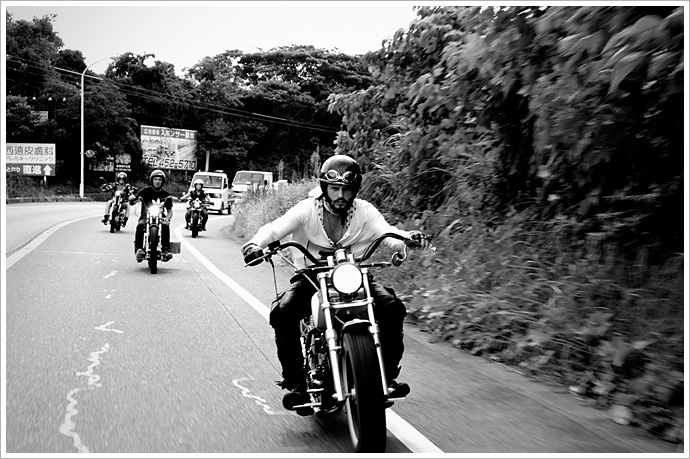 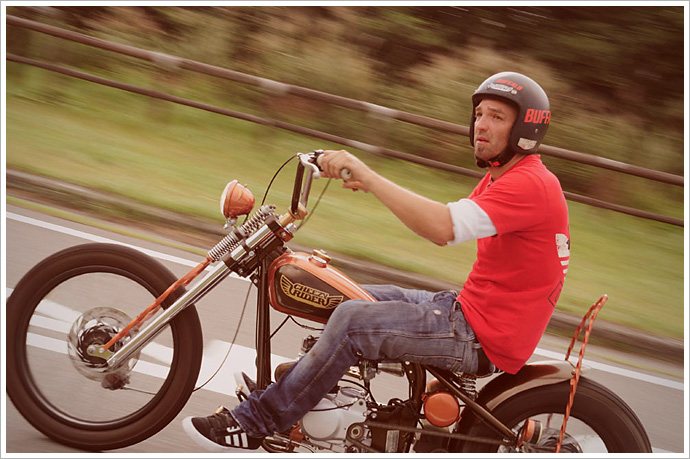 Talk about inspirational… and if you’re still thirsty for another cup of get-up-off-your-ass then I’d be checking this here little video out, too. I’d be off in a second for and adventure, if it weren’t for this damn blog that needs constant updating. Damn you, cool custom motorbike blog. Damn you to hell.