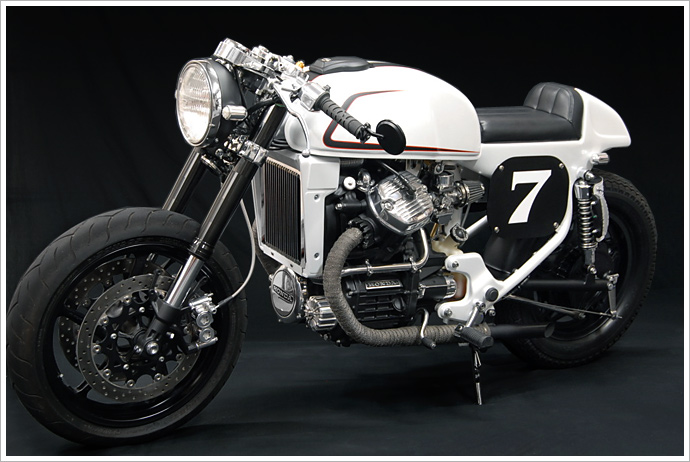 If Pipeburn was a wild animal, and you were a custom bike builder looking to trap it, you’d have to lure us with something we’d find tempting. Really tempting. Now blind Freddy could see we like cafe racers, so that’s a baiting given. Then there’s CXs which Scott and I both seem to have a “thing” for. I’m currently building a bike with R1 front forks on it, so that’s also a pretty tempting inclusion for me – not to mention that my build is also a v-twin and a shaft drive. Add that to the fact that the number 7 just happens to be the combined IQ of Scott and I, and you’re probably starting to see that we don’t so much like this bike as want it like a hipster wants a beard. Quite frankly, this bike is a perfect storm of Pipeburn temptation. And who, I hear you ask, is the genius poacher behind this irresistibility of a bike? Here’s the bike’s owner, Mr Greg Volkmann from Sacramento, California. “Back in October of 2011 I bought a bike off eBay from a ‘customizer’ in Denver. Upon receiving the bike, I realized it would have to be completely rebuilt as the work was sub-par and it didn’t even run. Luckily, I found www.choppercharles.com and a builder in my neighborhood, aka Larry Cargill. Larry has built many bikes and had the skills to help me bring the bike’s quality up to the dream I had in mind.” 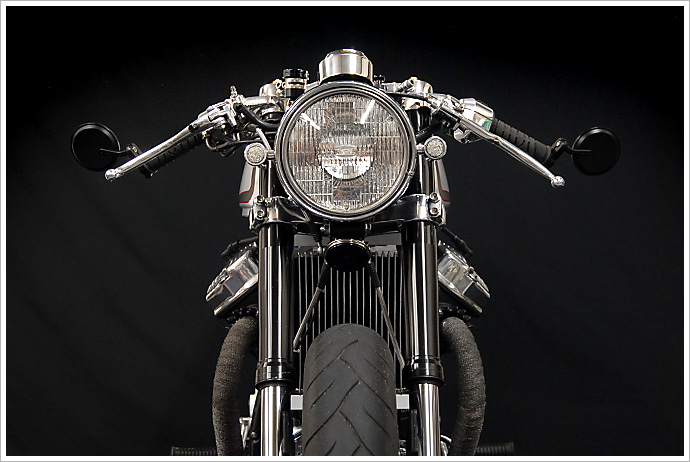 “First on the list was to get the bike running. Rebuilding the carburetors and making adjustments to the motor brought it back to life, however many other issues started to arise. Wiring problems (a birds nest wrapped in black tape) as well as bodywork and paint flaking off just to name a couple. So the venture began to rebuild. With the motor running now it was apparent that it had internal problems. So it was torn down and rebuilt including the stator and broken cam chain components. Then the stock front suspension was replaced with a front end from a 2005 Yamaha YZF-R1 coupled with a triple tree from a CBR954RR which did the job nicely.” 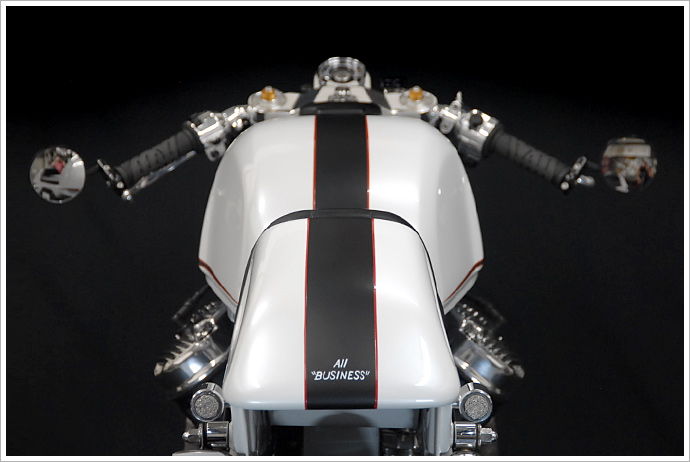 The business end of “All Business”

“Next came replacing and relocating the CX 500 gas tank and moving it back for fork clearance. Larry even manufactured a center mount for the headlight that makes it look like it’s floating on the front end. Using an digital speedometer, a custom panel was handmade that would line up with the future paint theme. Next came relocating the battery and building a custom wiring harness to hide neatly under the seat, as well as shortening all of the control cables for the cafe-style short bars. Last was to build new pipes and custom made internal baffles for the exhaust so it looked like it had open straight pipes.” 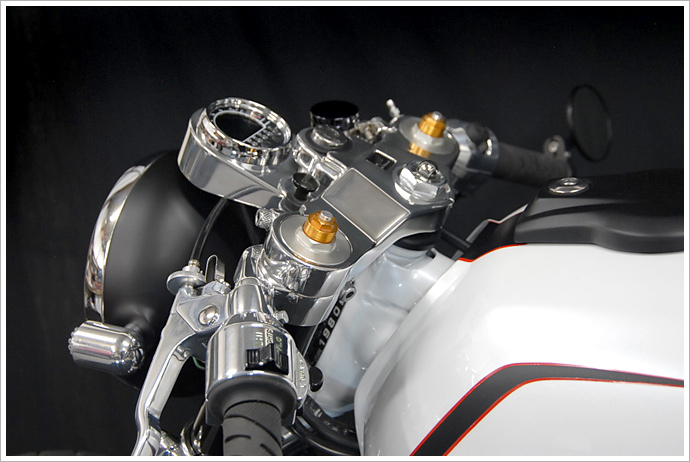 “Once all the mockup work was done, the frame was stripped down to bare metal so corrections could be made as well as other modifications that make this bike a one-of-a-kind. After weeks of preparation to get the frame and tank ready for paint, we decided on Pearl white with satin black stripes. But like any artist, Larry waited for the bike to tell him exactly what it wanted as far as design goes. It had to be classy, understated and retro, but still racy. What the bike got was all that and more!” 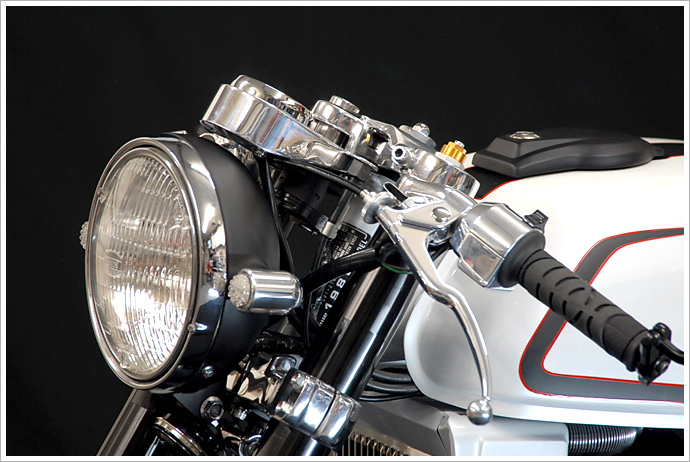 “During assembly the bike begged for more detail. With the exception of the rims, everything that was aluminum was hand sanded and polished to a brilliant shine.” 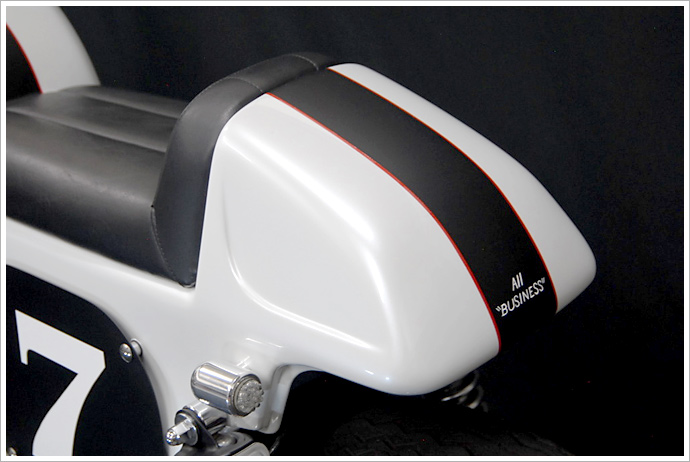 “The bike is short, stout and mean. The straight pipes have a guttural roar that sounds like no other CX. During this build the bike has earned the nickname “All Business” with the CX crowd. And that’s just what it is, “ALL BUSINESS”, no frills.” 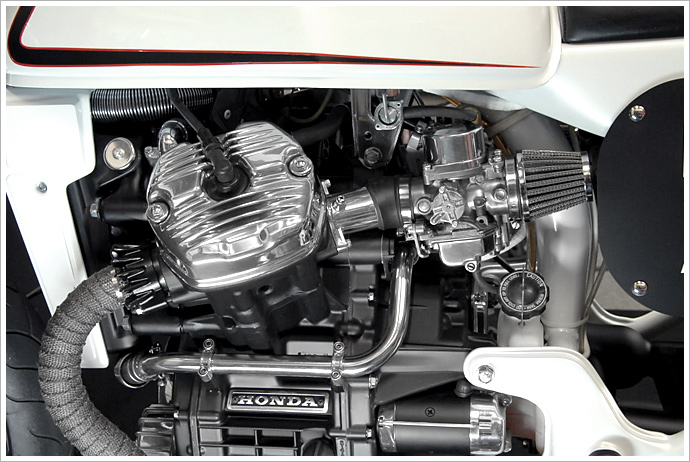 “On its first debut showing at the CJMC Classic All Japanese Motorcycle Club swap/show in Auburn CA, on 1 July 2012 (one of the largest Japanese bike events on the west coast) the bike won 1st place in th ecafe racer class against some very tough competition. I couldn’t be happier with it.”