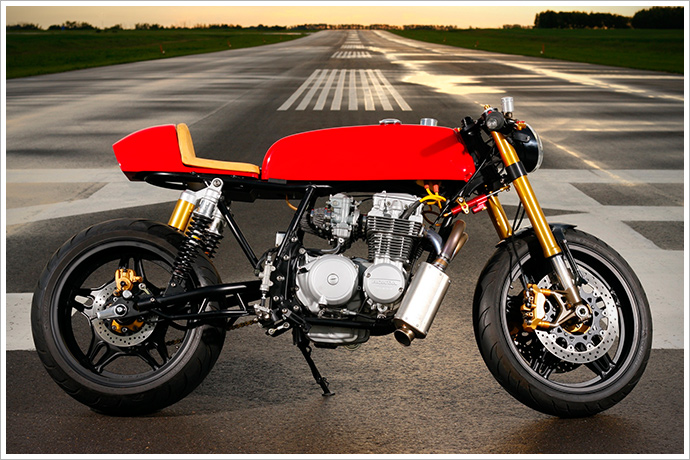 How’s that for a fresh take on an exhaust can?

Adam Sandler movies. They’re a dime a dozen. He’s an uncultured yet loveable ice hockey player/divorcee/single dad/college drop-out who tries his best to raise a kid/make it into the big leagues/get a job/be responsible/fall in love/manage his successful father’s dildo factory (what – you didn’t see that one?) blah blah blah. That’s what I thought too, and then I saw Punch Drunk Love and I was blown away. What really made it for me was the fact that I went into it with preconceptions of what I was about to see and subsequently had my brain deep-fried by a very clever director who knew just how to screw with the formula to take something good and make it truly great. How the bejesus does that have anything to do with the killer Honda CB you see here? Well, this director’s name is Derek Pauletto and he’s managed to cafe a Honda CB (which some would consider a very tired, “Sandler-ish” formula) and put just enough clever little twists into it to really make it into one of this year’s must-see customs. 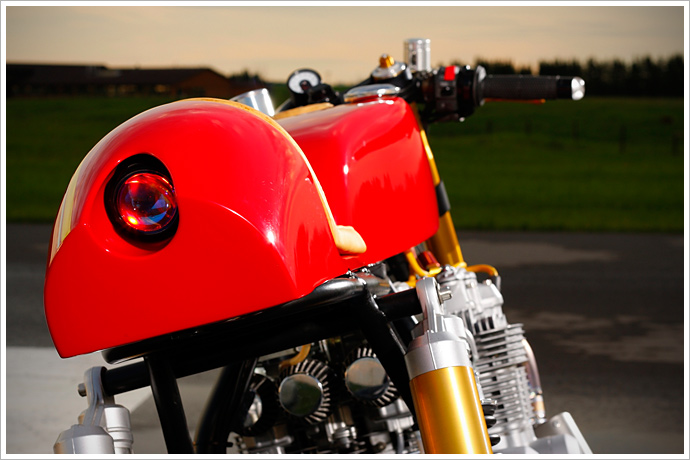 Here’s Derek. “I formed Trillion Industries in ‘03 and made it a full time job in ‘05. Half my work is motorcycle related from complete ground-up builds to repair and restoration of unique bits you can’t buy anymore. From ugly vintage cast aluminums to exotic titanium, we do it here. We also fabricate anything else that is metal – from trailer BBQ’s to railings to repairing pots and pans. If you need it worked on we are glad to help out.” 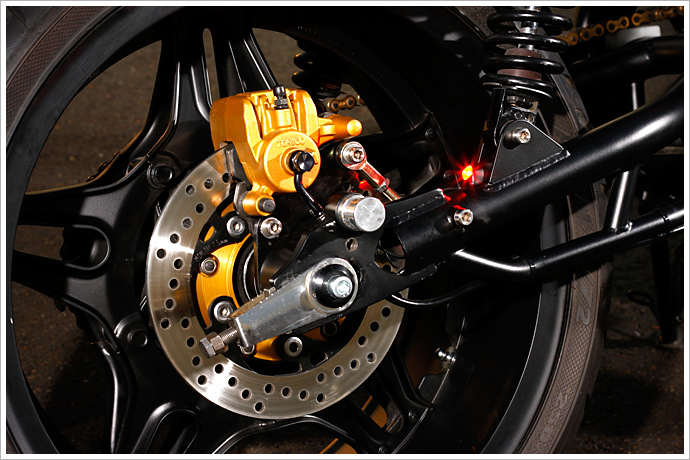 Sick of supermarket queues, Derek fitted a barcode scanner to the bike so he could ride and shop simultaneously

“I used it because I couldn’t get rid of it; no one wanted a ‘crappy old nothing bike’”

“I started this bike back in ‘04 with the wheels first because I had this idea with the new tyre sizes the v-twin bikes were using could be a cool cafe styled layout for a bike. I used this Honda CB650 because i couldn’t get rid of it, no one at the time wanted a “crappy old nothing bike”. I took personal offense because this bike I had for a couple of years had gotten me around everywhere I needed to go and even to the tech school I got my welding journeymanship from. I decided it’s fate was to end with me and a customizing I will do! The CB deserved it!” 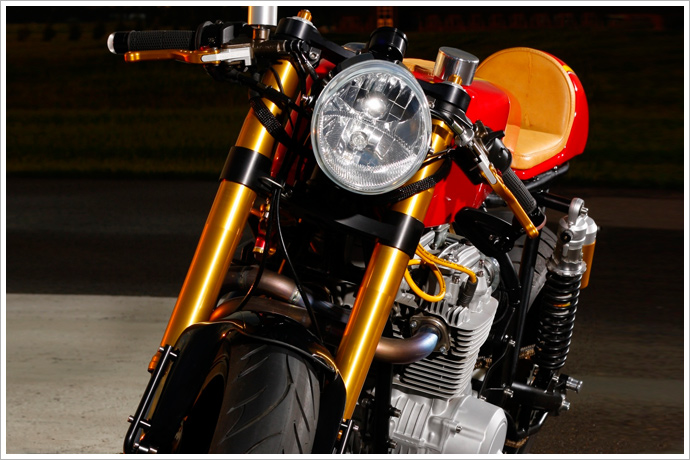 Headlight is from Harley and Fender is from Buell. Bike soon to be with ponytail and broken, then?

“The wheels I widened from 1.85” to 3.5” on the front and 2.5” to 8.5” on the rear, not an easy task as I found the Comstar wheel rims where hollow! Next I tore down the engine and overhauled it with new valves bearings and shaved 0.015” off the head to increase compression. I then tackled the frame by cutting off any tabs that were useless or not needed, widened the left side of the frame to accommodate the width of the new rear 250 tyre.” 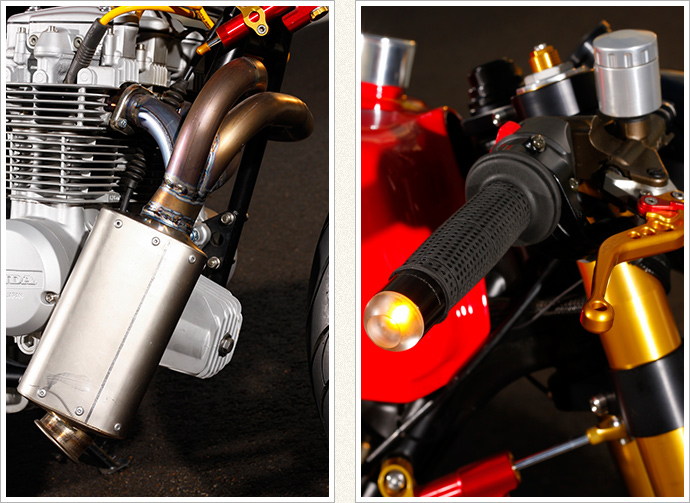 “I overbuilt a brand new swingarm for looks as it still will only have just above the stock HP, it utilizes the original rear chain adjusters though and added 2.75″ to the length overall. A widened (1.75″) off-set engine drive sprocket I made from two sprockets is how made the chain line up with the rear sprocket, and it’s supported by the sprocket cover and a bracket attached to the frame. Grafting the ZX front end was accomplished by changing the front wheel bearings to a larger ID to fit the 25mm axle and a custom set of T-clamps. CNC’d all the brake disk to wheel carriers.

The tank and tail are a ‘69-‘70 CR750 replica from Airtech in Vista CA. USA. The headlight is Harley V-rod and the front fender is from a Buell. This bike has bits from all four Japanese manufacturers and some American parts, a bit of a mutt but I feel it all works. New Mikuni flatslide-style carbs are the newest parts I’ve added to get better performance not seen in the pics.” 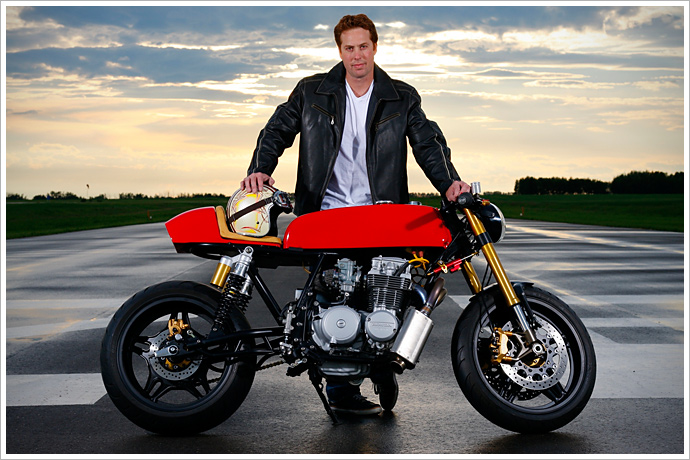 Highway to the Derek zone

Nice work, huh? With it’s crotch-rocket-cum-cafe-racer (crochet racer?) style, It’s a definite breath of fresh air to the CB scene and hopefully due cause for any of you out there with a rusty old Honda in the garage and a twinkle in your eye to pause and think to yourselves, “sure – I AM loveable college drop-out with a heart of gold, but maybe I should give that relationship idea for a cafe’d CB a clean sheet of paper…”