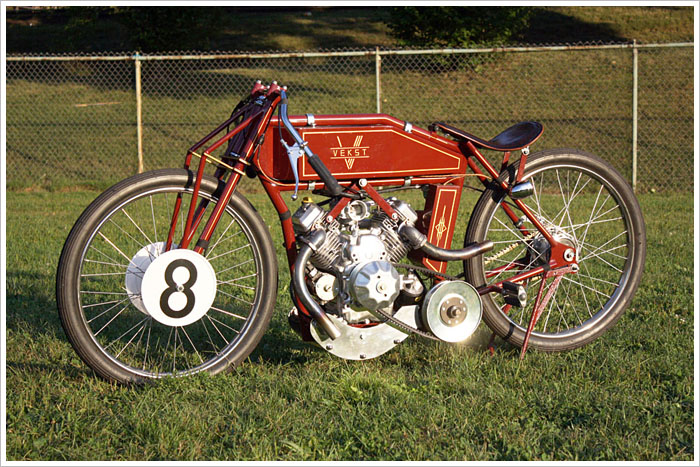 Tally ho old chaps! It’s been a splendid weekend of moustaches, smoking pipes and all things distinguished. As gentleman from around the world hang up their suits – until their next court appearances that is – it’s safe to say the first Distinguished Gentlemans Ride was a resounding success. We thought it was fitting to feature this hat tip to the vintage board tracker. However, this exquisite board tracker is surprisingly not the vintage most would expect. Built by Co Bappe who was inspired by the board trackers of old. “Bikes never really appealed to me until I discovered the early board track racers” says Co Bappe. After some research Co realised he could never afford a vintage one and would probably never have the opportunity to ride one. “So I bought a welder, angle grinder, and tubing notcher from Harbor Freight and 11 months later I had built my own board track racer” he says. If you’re thinking 11 months is a long time, that’s because Co was learning how to weld and fabricate along the way. 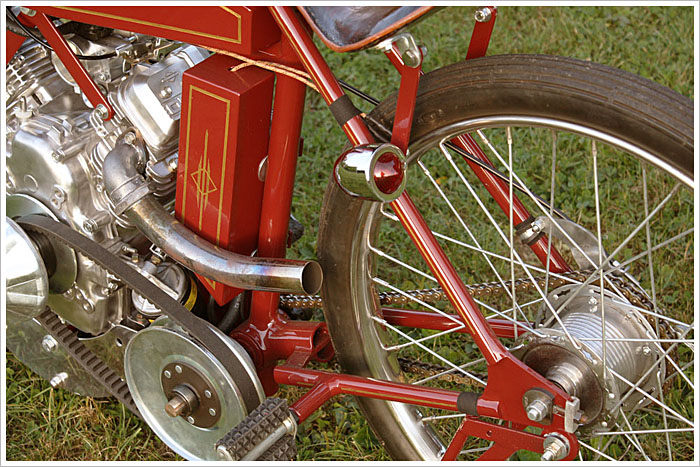 Mr Bappe started by doing a lot of research on the original bikes, in terms of engine size and bike dimensions. “After that I had to do more research to find parts to use.” say Co. “Not having a machine shop available or the knowledge I had to make due with what I could find. I then had to figure out what engine to use, I settled on a 23hp 630cc Briggs and Stratton v-twin for a few key reason. One, it had the same power output as the original bikes and two, it had the same rpm range.” 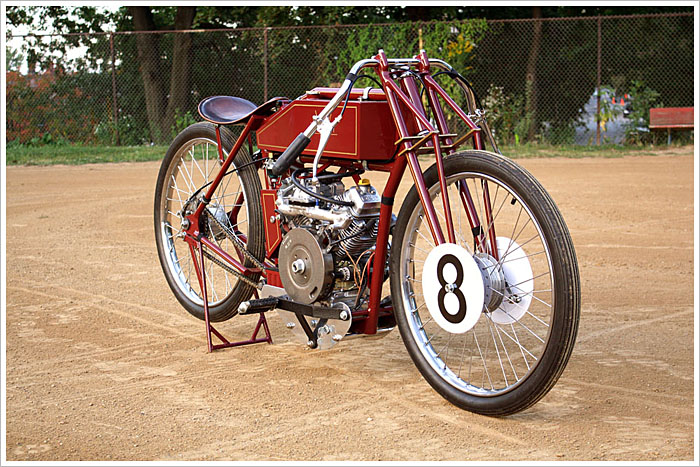 Co then began to gather images of all the bikes that really caught his attention and would use as inspiration. Specifically the 1919 Jefferson, 1923 Harley, and a 1919 Excelsior. “I found profile photos of all these bike and took measurements of them and started on a original design.” he says. “I transferred that design into a life-size drawing on butcher paper. I also had to set a time period that this bike would have existed to which I chose 1926ish.” 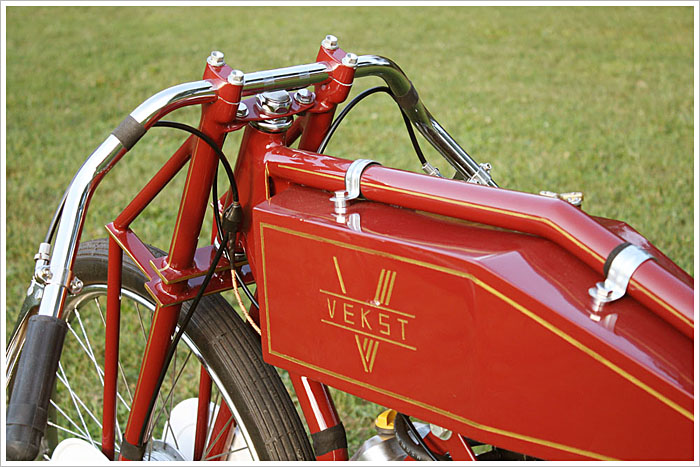 Then Co started the actual fabrication process, cutting tubing and building a ghetto frame jig out of 2×4’s and threaded rods. “It was a quite a contraption that I’m surprised even worked. This bike was built entirely in my apartment using only basic tools from Harbor Freight.” 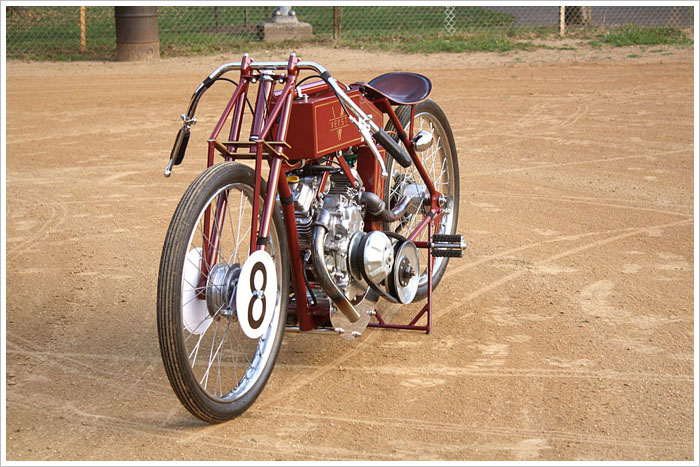 One of the biggest challenges Co had was finding parts that looked like the originals, and were easily accessible and reliable. “The idea behind the bike was to make something that captured the spirit of the original but was more reliable and rideable on a daily basis” he says. “The transmission is Comet CVT that transfers power to the rear wheels via a 420 chain to a Puch moped hub. The rims are Worksman industrial bike rims and the tires are Coker servi-cycle speed rated for 92mph. The bike unfortunately needs a front brake so I used one from a Honda cb125. I think that is the only actual motorcycle part on the whole bike. Most of the parts for this bike came from go-karts, minibikes, bicycles, and tractors.” 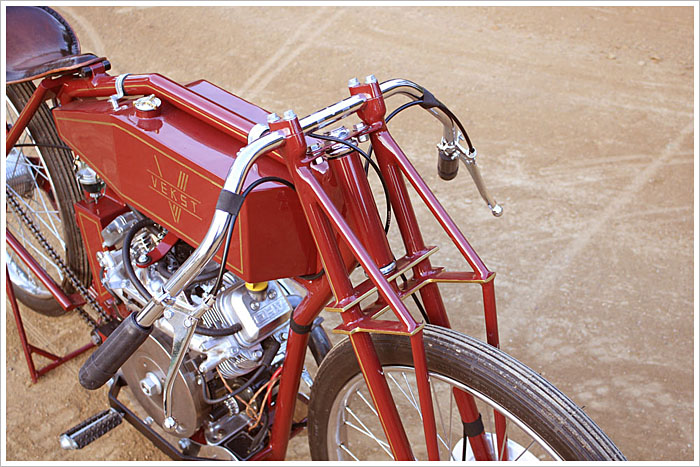 The exhaust pipes were another challenge. “I didn’t have a tubing bender so I had to find a alternative” says Co. “I got lucky and found some old excise equipment  that was the perfect size and bend. I also wanted them to look like the old bikes. So I got some gas pipe flanges from the hardware store and welded them together to look like the real deal.” 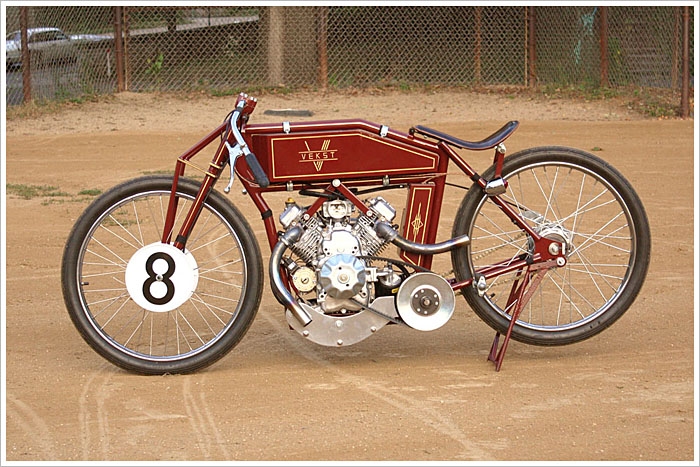 Co finished the bike off by using a small air compressor and HPLV gun and painting it in his laundry room. “Which in retrospect was a bad idea” he says. “Since this was my first time painting I had no idea that paint would go everywhere. I ended up inadvertently painting the washer, dryer, floor and window screen; but as they say lesson learned (or earned as I like to say).”

Co has now got the bike bug and is already working on his next project which is going to take it’s influence from even older machines. “More along the lines of the very early bikes from around 1909.” he says. Mr Bappe does plan to get this bike road legal and has the pefect headlight which he plans to attach soon.

For more pictures of this delightful board tracker, check out this distinguished website.

[To see more from the Distinguished Gentlemans Ride, check out all the photos on the Facebook page]