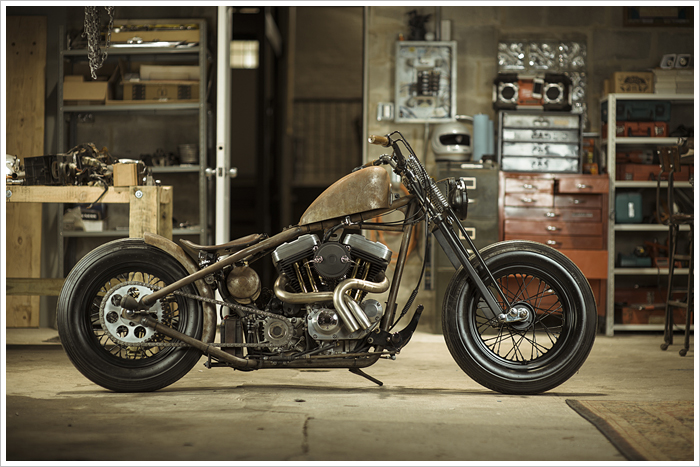 Life is the biggest lottery of them all. And it seems like Dan Kocka from Chicago won the jackpot in the ‘Cool Dad’ lottery. “I grew up around hot rods and rock ‘n roll thanks to my dad who always owned bad ass muscle cars” says Dan. “Dad owned a few bikes as well – an old BSA chopper that was pretty cool.” Dan taught himself to ride at a very young age, but was never that interested in building or tinkering on his motorcycles. Until recently, when he was given a solid insurance claim for his hail damaged car. Instead of replacing the car, Dan decided to do something sensible – for the first time in his life – and save the money. That was the plan until he came across a rolling chassis and a ’96 Sporty motor on Ebay. “I’ve been an electrician for 5 years now so I have a decent sense of how things work, but motors are something I’ve always wanted to learn” he says. So Dan threw himself into his first motorcycle project – and what a project it was. 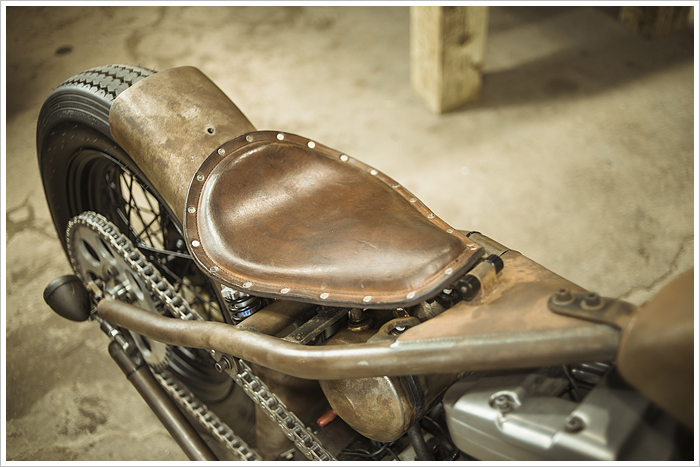 “So I ended up buying the rolling chassis and a ’96 Sporty motor on Ebay” says Dan. “I knew that anything I started I was going to finish. Over the course of a year or so, in my buddy’s garage I chopped and modified and pieced together the parts I had or the parts I wanted. I knew generally how I wanted it to look and sound. Last spring, Chicago had a couple of hot humid days while I was out of town and my brother called me up and said he had some bad news, that the humidity rusted all the parts we had stripped. I said fuck it, it probably looks better now. I never touched the metal since then, only embraced the sinister look, and decided to add to the darkness. I’ve decided to call it the 1944, because it sort of looks like it’s that old, but mainly in memory of my dad, who was born in that year, and if he was still alive today would probably think it’s a pretty rad bike.” 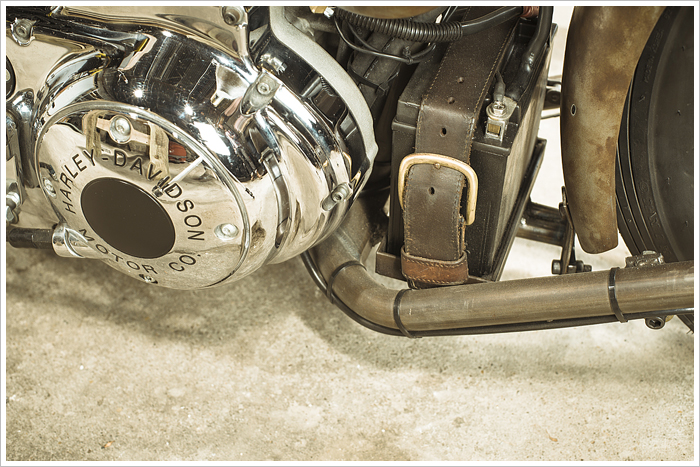 Dan tells us the bike runs as means as it looks. He rebuilt the top end with Buell parts. The handlebars are stock off his other ’87 sportster with a moto crossbar which Dan welded on. The clutch lever is an ASV moto clutch he machined to fit 1″ bars. “The brakes are all brembo which I have to thank Detroit Bros for making a bracket that houses Brembo calipers” he says. Both rims are painted 3×16’s with MT90-16 Shinko vintage tires. The seat is by Mother Road Customs out of Montana. The fender is a chopped stock sportster fender. The headlight is a Hella fog light off Dans brothers old truck and the tail light is just an old ford light off Ebay. 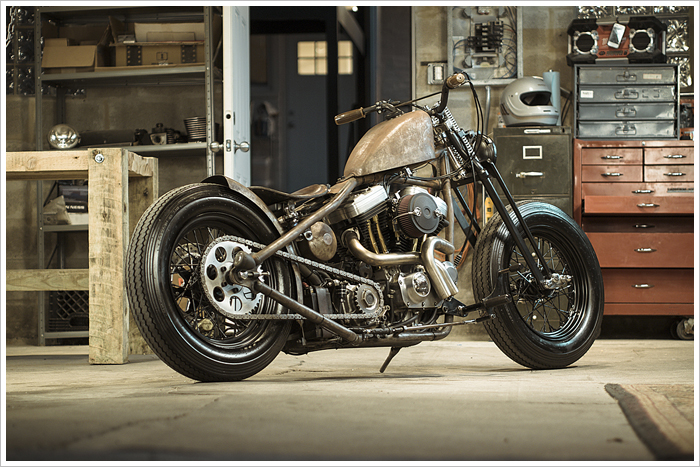 “Forward controls for Harley’s are always ridiculously overpriced so I bought a universal set off TC Bros with intentions of modifying it to fit. It bolted right on the pattern of the front motor mounts and even extended by 2 or 3 inches. Couldn’t have worked out better. Big Jim from Chicago made the brass pushrod tubes. I like leaving things raw and uncovered than dressed up which is why I cut the cam cover. All the paint and tin mounts were done in the garage with tools and material anyone with some ambition can easily acquire.” 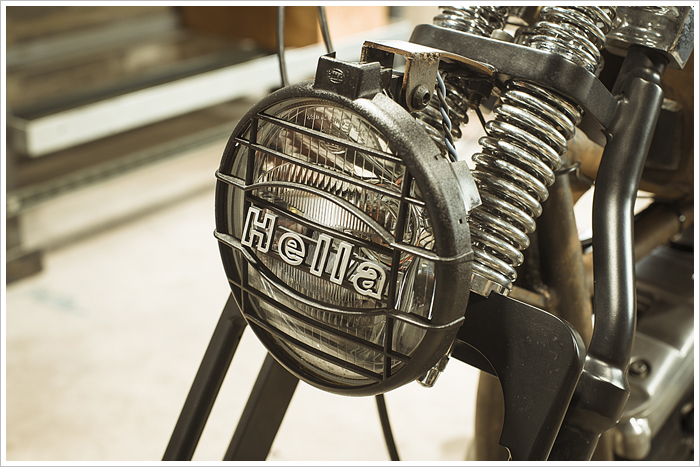 The end result is a great looking bobber that could be from any era. The rusty metal – although originally an accident – adds to the character of the bike given the appropriate name of ‘1944’. A couple of shout outs from Dan: “I couldn’t have done it without Gene Morrow for always giving me a place to work and tools to work with, Matt Gacon for always fixing my fuck ups, Juan Hernandez for the amazing photos, and spoon, for loving my good decisions… and bad ones.” 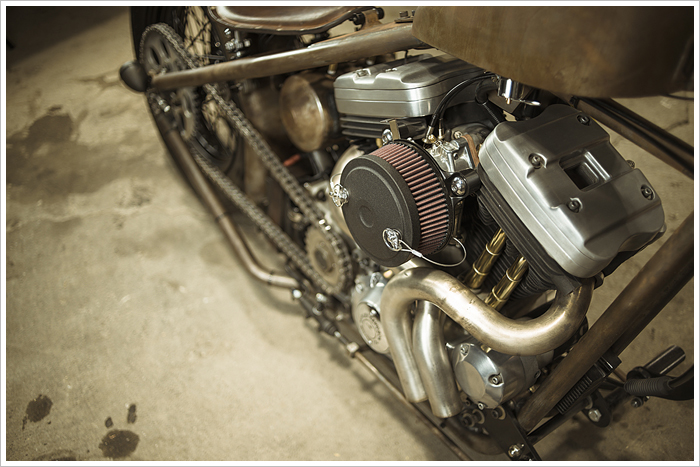 “Lastly, thank you dad, for taking me to AC/DC concerts, drag races, and demolition derbys when I was a kid, instead of playing catch with me in the backyard.” There’s a lesson in that for all the dads out there – including myself. 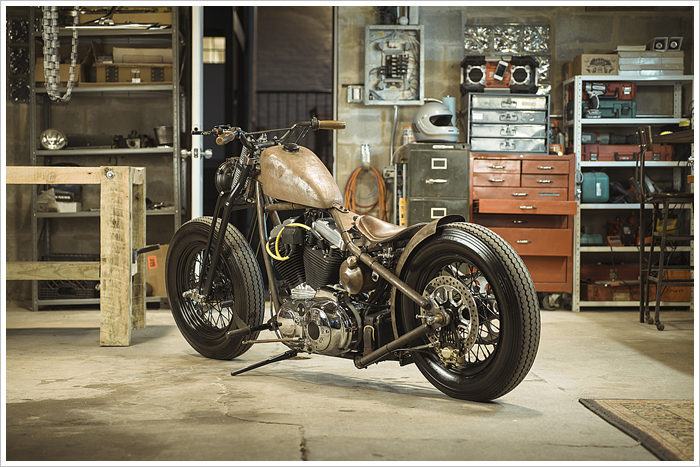 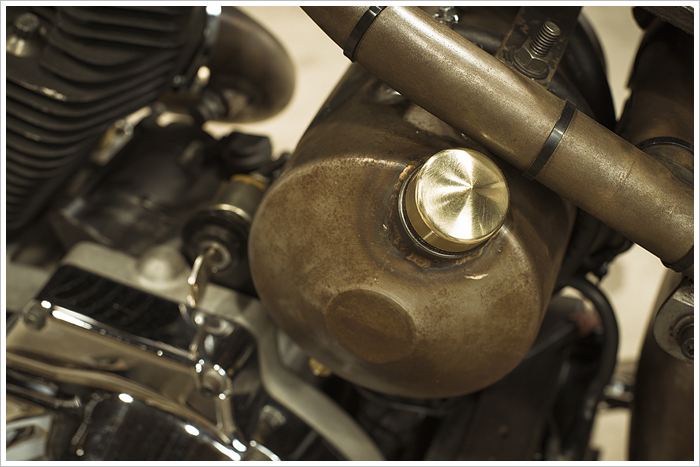 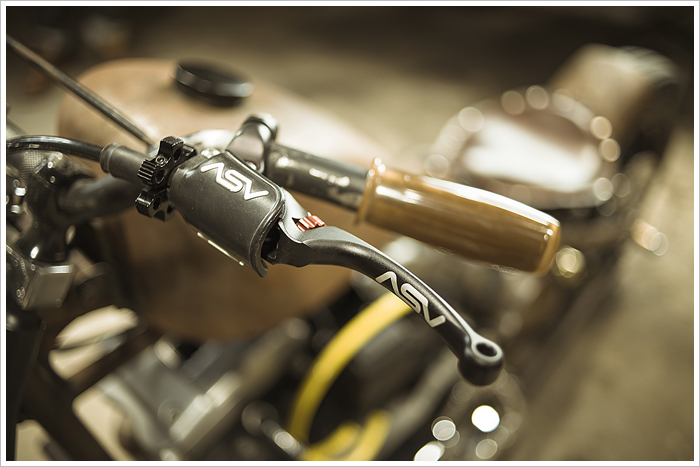 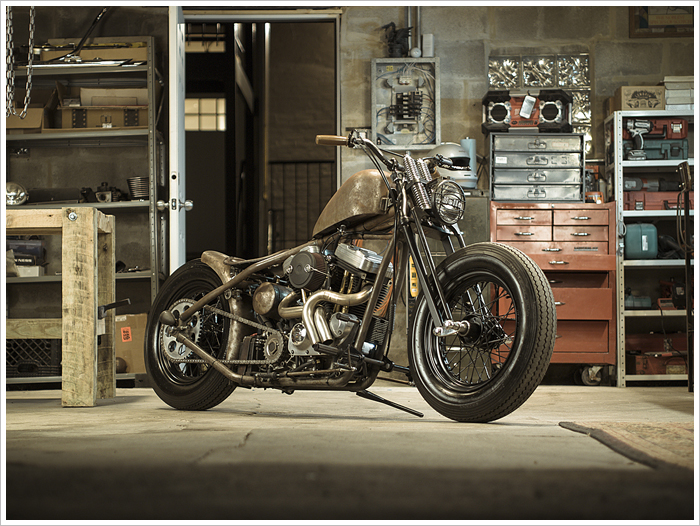