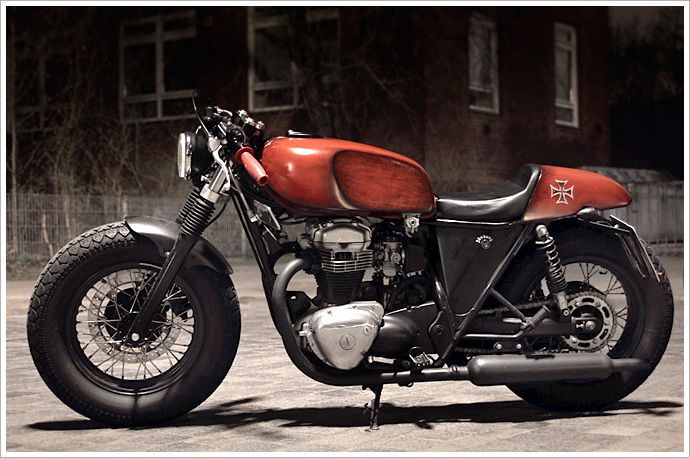 So, we’ve just had a sweet BM tracker. Let’s continue the Germanic thematic with a bike not made in Deutschland, but perfected there. And with a Red Baron theme, no less. It’s interesting to note that Germany and Japan have an intertwined engineering relationship when it comes to new automotive developments. For almost all the most important road safety developments of the last 50 years, it was the Germans who developed the technology and the Japanese who perfected it. Take ABS as a great example. An electronics system created by Bosch and then installed by BMW on their K100 in 1988 was the starting point for ABS on motorcycles, but it arguably took Honda and their current generation ABS system available most notably on their CBR1000RR to perfect it. Many a professional motorcycle reviewer noted that in their minds it was the first truly unobtrusive ABS system that functioned on track as required without sacrificing lap times. You can see a similar development path for other technologies such as EBD, seat belt tensioners, and traction control. So what happens when you feed motorbike through the system the wrong way around? Oh, don’t worry – the results are better than you think. Meet the JagdBobber. 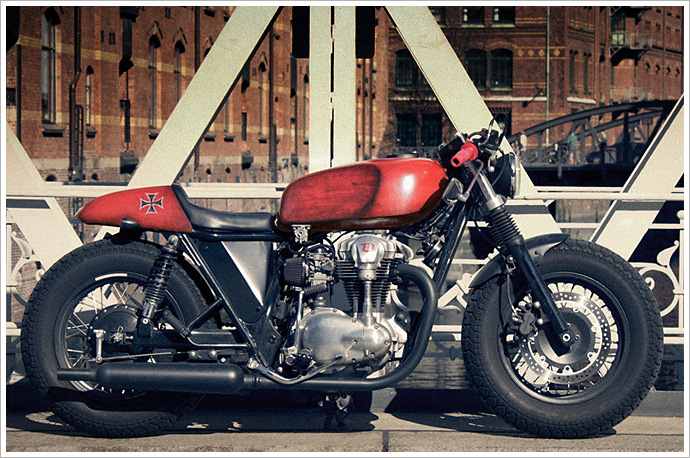 “It’s not a cafe-racer, it’s not a ‘brat’ – it’s a ‘JagdBobber,’ that’s what I call a bike with cafe racer lines, clip-ons and bobber wheels,” say Lars Justinger aka the bike’s builder. “Or what might happen when a Harley WL and a featherbed Norton/triumph have a mating and this would be the bastard child. I would have loved to build something like the Garage Company low raked fours or the black Triumph that they did – just with 16” wheels. But since I live in Germany and we have TÜV here a raked frame is something they absolutely dislike and it would have never been possible to get it on the streets legally… and street legal was something at the top of my to-do list.

So I did research what can be done and what are the demands of the officials and in the end I decided to leave the frame as it is (except for some cleaning) to make it more easy. I wanted to have the chunky wheels and luckily I came across some wide yokes for a w650 on eBay… yippee! I got some shorter shocks, clip-ons and parallel to that I did some photos and started to design the thing on my computer. So before I really started to pull the thing totally apart my basic plan was ready.” 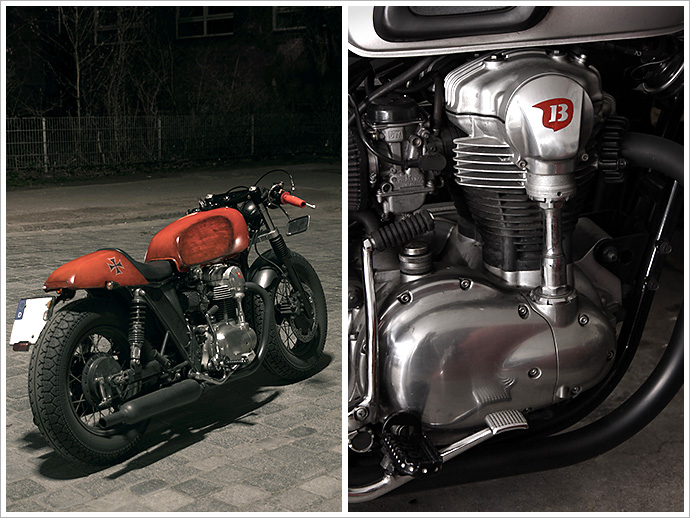 “The rear section was made out of a XS650SE fuel tank. Mostly because there was no possibility to properly bend and shape sheet metal. Resin and fiber would have been an option but I wanted to try to do it in metal. The welds were bad and I got the opportunity to use tin to get the thing in shape. My first attempt was a total mess; I did some research on YouTube – that helped. But that’s something I didn’t learn to love. To the guys who nail that down, respect!” 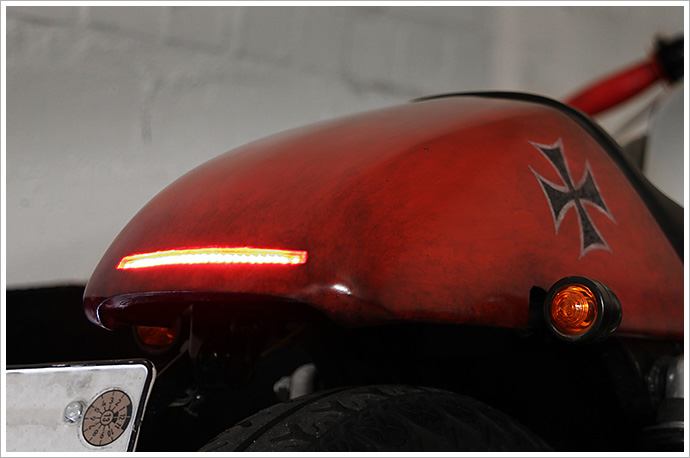 “In the end the XS750 tank hit the jackpot.
The match to the already finished
rear end was spooky”

“The fuel tank took ages to find. I think I tried at least 5 on the bike and maybe 7 on the computer. In the end the XS750 hit the jackpot. So amazing how that thing fitted in. The match to the already finished rear end was (and still is) spooky. And the lines fit to the frame as well. I had to fabricate new mount points to attach it to the bike.” 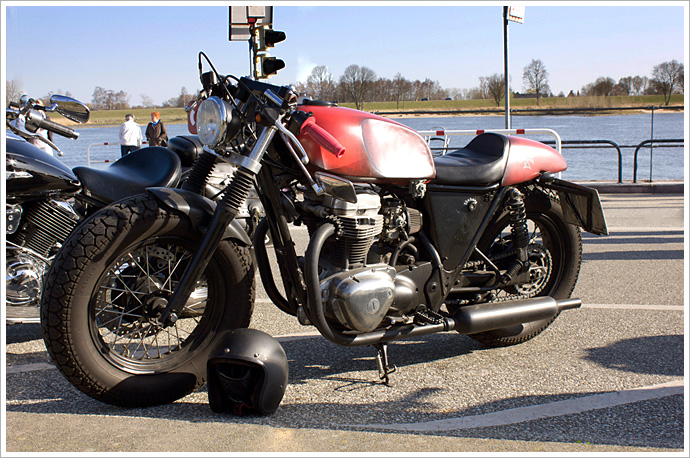 “Since I wanted to do most of the stuff myself and I had no spray booth available I thought of a paint scheme that looks OK not being perfect. So I tried to give it a used look. Rattlecan basecoat, then fingers, sponges, thinner, grinding; the good thing is you can’t ruin a used-look paint job. Stop when it looks used enough or if you’re gone too far just take some cleaner and restart. There’s also a little story behind the paint scheme. I used to ride on my red drifter to the shop. A guy there always said, “there’s the red baron again” and since my first motorcycle was red, the drifter is red – I adopted that for the W650.” 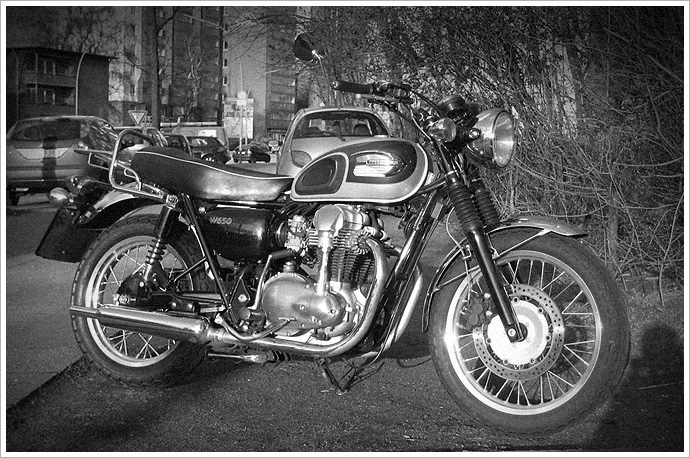 Beautiful work, Lars. For those of you keen to see just how Lars did it can follow the complete build on his blog, too. Das ist gut, ja?