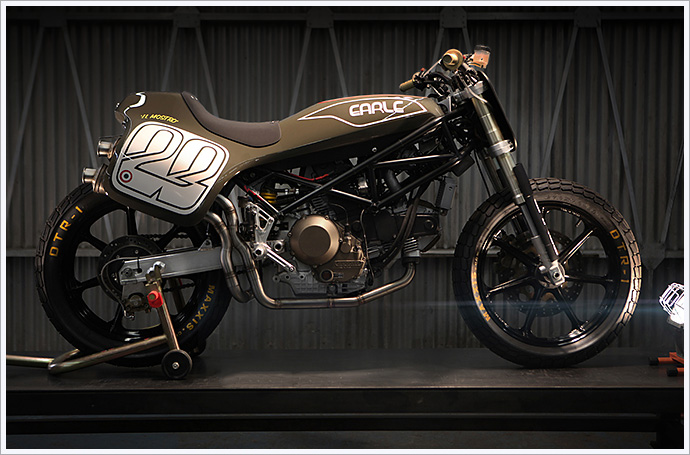 Like it or not, but I have a theory that goes kind of like this – anyone who rides a motorbike has a fair amount of kid in them. Now don’t get me wrong, I’m not calling anyone immature here; it’s not about that at all. What I’m getting at is that fact that there’s a certain wide-eyed enthusiasm that motorcyclists have that says that they still have some degree of that beautiful, open-minded and untarnished approach to living that is usually leached out of adults as they swallow the bitter pill of ‘responsibility’ and slowly fade to grey. For me, I’ll always be part kid. Which probably explains why this bike rocks every bone in my body. To me it’s look takes the best of Battlestar Galactica, Evel Kenievel, and Megaforce all rolls it into one big 1970s TV show wet dream. Now if you’ll excuse me, I’ll be in my pyjamas playing with my wind-up Kenievel Stunt Cycle on the living room floor. 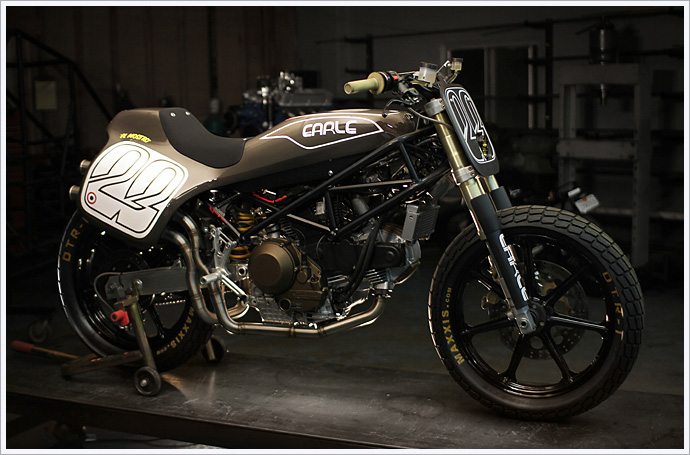 Alex Earle, owner of Earle Motors, is an experienced automotive designer with work in his portfolio for the likes of Porsche, Audi and VW. He’s also an avid off-roader. Currently living in California, but originally hailing from Utah, he’s always keen to get his dirt on and has even entered himself in Romaina’s 6 day trials. Twice. We’re guessing that the whiff of flat track in the Ducati alongside the Kenievel-ness isn’t a coincidence at all. 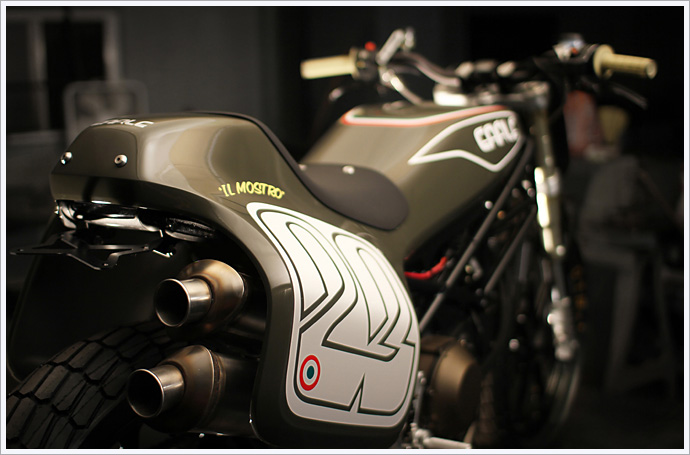 “Flat track always appealed to me,” says Alex. “I loved the brutal look of these racers and felt this could be the perfect antidote to the current proliferation of café racer bikes. This newly-emerging sub category of bike is a perfect blend of classic Southern California cool, robust suspension, urban ruggedness and meaty tires.” 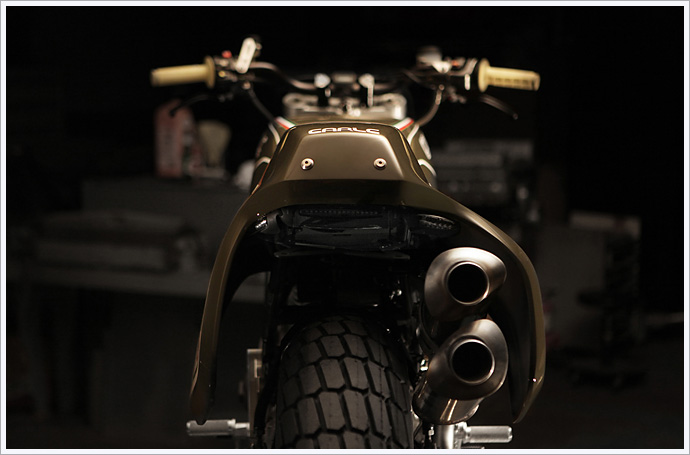 Alex produced the concept sketches, then a 1/5 scale model in foam, paper and styrene. Next the model, Ducati motor, and frame were 3D scanned to facilitate the building of a digital version of the bike. The data was used to mill a female mold from which the fresh bodywork emerged. As this was being completed, the graphics, new aluminium tank, headers, and wheel adaptors were fabricated. The end result is bodywork with the fit and finish of an OEM production machine. 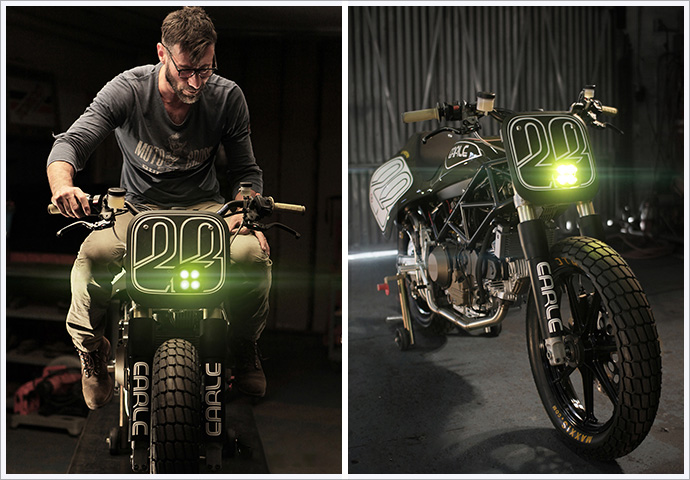 “The gas tank holds approximately 3 gallons of fuel and includes the threaded bung for the petcock and the factory fuel sending unit. The cap is a Ducati Performance vented unit. To keep the height of the tank low, the factory airbox was removed and replace with K&N direct filters.

For the rear wheel, a Harley 19″ front wheel was widened by 3 1/2″. An early 80s Kawasaki wheel was used almost stock in the front. Both require major wheel spacing, bearing carrier, rotor and sprocket surface machining. The parts were then powdercoated in a black wrinkle finish.” 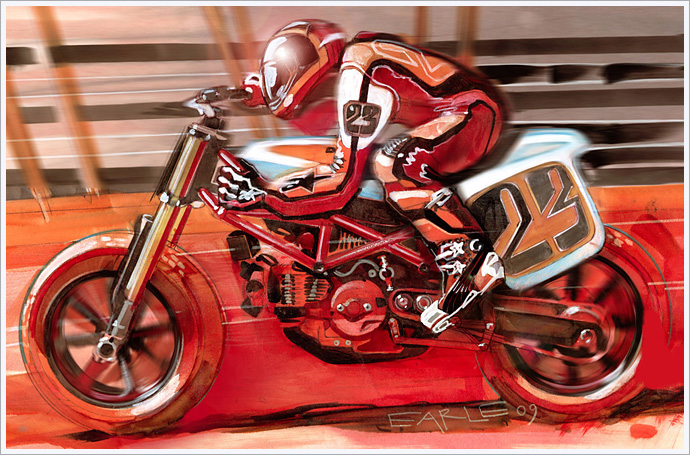 Alex is planning to produce all the necessary parts as a kit for builders. It currently fits any first generation Monster and appareently it could easily be altered to fit Harley XR 1200s or a Triumph. “The build-up is very similar to the original Meyer’s Manx dune buggy concept. A fibreglass body on a a lightly modified, street legal frame. To further support the builder, I will also provide the fuel tank, exhaust, wheels and headlight assembly.” 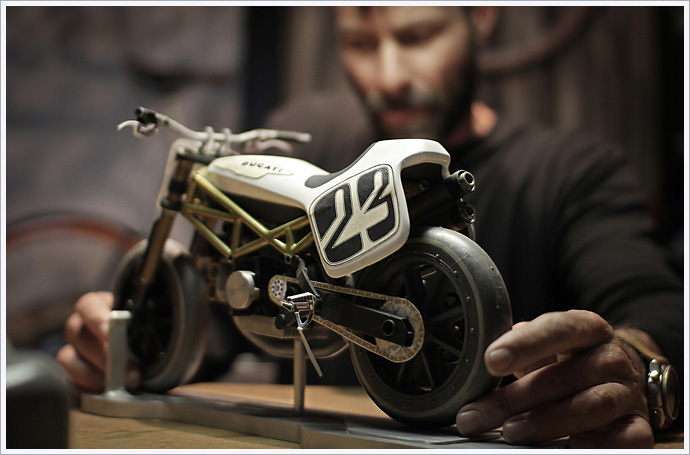 If you’re interested, and we know you are, why not contact Alex and find out more? And make sure you send our regards while you’re at it.

(Spotted in the premier issue of TANK moto magazine. Photos by Chris Thoms.)