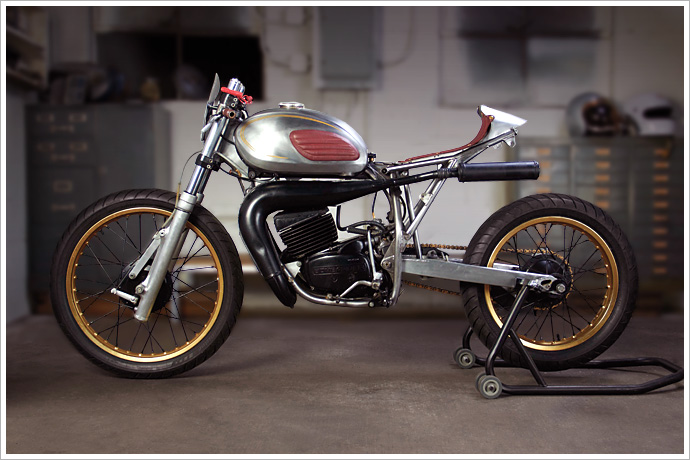 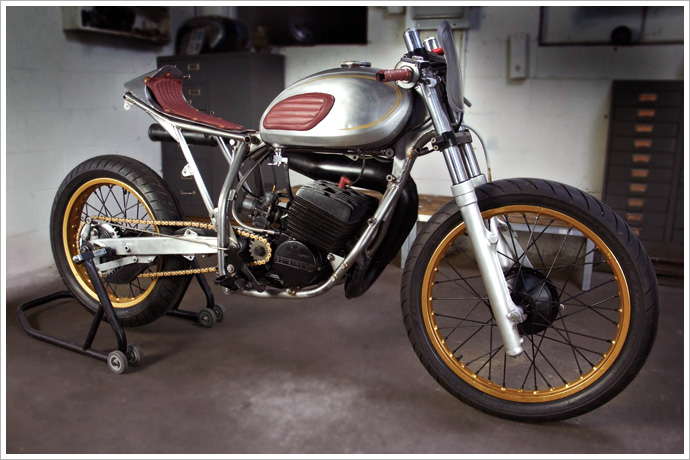 The man behind the build is Doug Devine from Modern Metals in Louisville, KY. “As I searched for an old truck on Craigslist last May, a ‘84/85 Can-Am MX250 somehow appeared at the top of my results list” Doug says. After studying the bike for a while Doug called his friend, Andy from PVP Cycles who knows and races vintage dirt bikes. “He assured me that he would buy the bike if I didn’t. So, I bought it realizing that I had found something special. The next step was figuring out a plan for the bike.“ 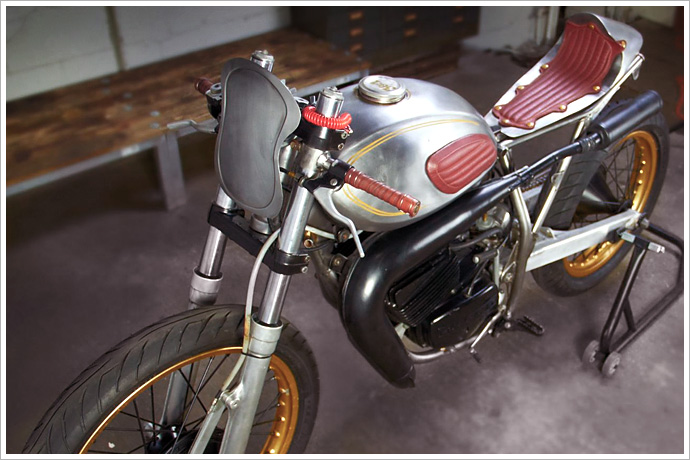 “Upon inspection of my $300 find, I knew I wasn’t going to dirt ride it because, well, I don’t dirt ride. Some interesting characteristics of this bike included a 531 Reynolds frame, magnesium forks and wheel hubs, Ankront aluminum rims and a Quad Link boxed aluminum swingarm. In stripping the frame, I realized there was neither a VIN plate nor a place for one. With even further inspection of the engine and the external mounts on the frame, I was excited to find that they were hand-braised bronze. 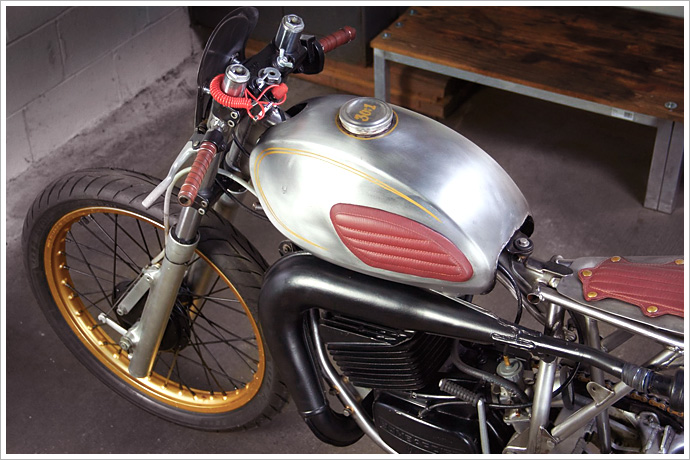 I made a few phone calls and realized this bike wasn’t in fact a Can-Am but an Armstrong CCM. I learned that not many of these made their way across the pond in 84’/85’. A couple of months of on and off again research revealed what I was going to do with a light weight and powerful two-stroke. Land. Speed. Race. Rest assured all you traditionalists out there—no harm or alterations were made to the structure of this bike.”

Doug found a cool bubble top tank off of a Kawasaki A7 Avenger with knee pucks. “I was inspired by the rubber knee pucks and contacted my upholsterer, Ginger from NewChurchMoto in PDX, to see if she could cover them in leather and do a matching seat. While searching through a local thrift shop for an old leather jacket to cut up for my grips, I met Sue Schofield from Inherited Leather, here in Louisville, who was able to match Ginger’s leather for my grips. Credit for pin-striping and a few finishing touches to the metal work to Dave “Matchstick” Brooks of Custom Vanner Magazine.” 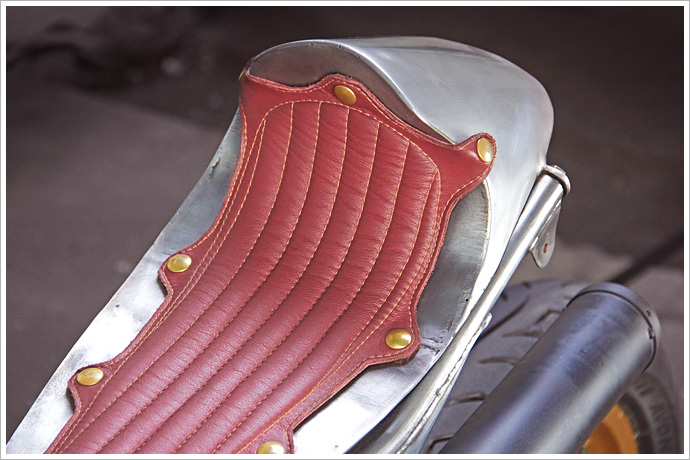 Doug fit the tank and began making a racing seat with normal sheet metal tools, hammers and a saw. “I cut and bent the seat in a couple of days and sent the seat off as I was getting ready to finish my XT500 build (Single Naked Chick) for The One Motorcycle Show in PDX. In mid-February, when I returned home from PDX, I started back on the 250 Speedster. I decided that no rear suspension was needed because it was straight line only. I made the rigid bar and aircraft time joints and welded/fitted them to the exact length with an additional 4 inches of lowering incorporated. Then, I moved on to the front forks which are Marzocchi magnesium leg 40mm dirt bike racing forks. First off, I cut 9.5 inches off of the front springs and placed a 1.5 inch preload under the spring to make them firmer. In addition, they are air charged forks. Next, I made clip-ons for the front forks—short, simple, and thick.” 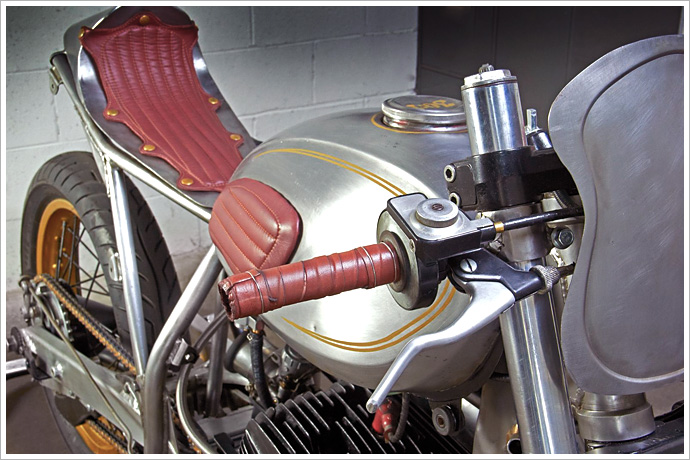 Doug fabricated a small and simple cowl for the front which really served no purpose other than allowing him to be able to run in two classes. “As an added bonus, the cowl looked good too.” he says. “The motor was also magnesium and had a 6-speed transmission slid into it. When I got the bike, the motor ran but burned tons of oil so I opened up the engine and replaced all the gaskets and oil seals. Finally, I put it back together and lit it up. After taking the bike on a few quick launches, I realized that I needed to have a new front and rear sprocket. I contacted Sidewinder Powersports out of St. Charles, Illinois, and he cut a 42 tooth rear – the smallest per the rear hub size – and a 17 tooth front. The 6-speed and 79’ stamped motor was another give away that this bike wasn’t a Can-Am.” 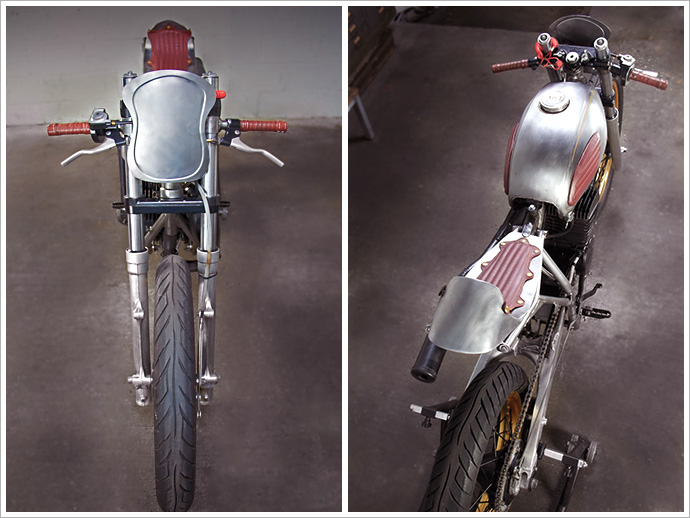 This year the bike was invited to The One Motorcycle Show where it garnered a lot of deserved attention – and it wasn’t even completed. “My goal is to finish everything this winter, and find somewhere to run it. Ultimately, I’d like to take it to El Mirage and Bonneville next year. This bike is a little scary to ride seeing as it only weighs 180 pounds (82kg) and has 40 horsepower without much braking.”