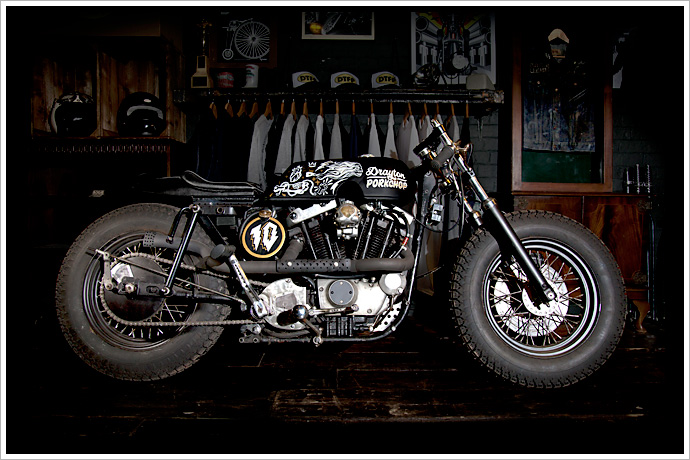 It seems fitting that for our first bike of 2014, we’ve chosen a matt black Harley with hand-painted artwork. Not only does the bike look amazing in its own right, but it also harks back to one of our all-time favourite posts – Jed DePyper’s infinitely badass ‘69 Sportster rat. Both bikes show scant regard for chrome, polish and delicate aesthetics. Instead, like a drunken sailor’s tattooed forearm, they display a brute artistic impulsiveness that screams rock ‘n’ roll from the rooftops. Meet The Drayton Porkchop; a bastard lovechild from an unholy union between Boneshaker Choppers and the Ilovedust design studio. 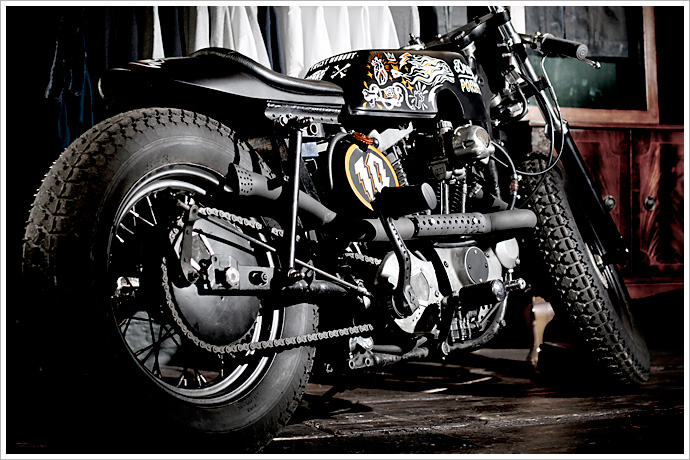 “This motorcycle was never meant to be a polished, perfectly executed custom bike” say the boys. “It was not destined to sit amongst glittery show pieces. It is not an exercise in high end fabrication. It was not meant to have flowing lines and blended edges; that stuff is for hatchback designers. The Drayton Porkchop was built to be a mean brute that looks as if it was built for a purpose, some kind of abused, enigmatic race bike with an illustrative flash of race graphics in white and gold to finish it off.” 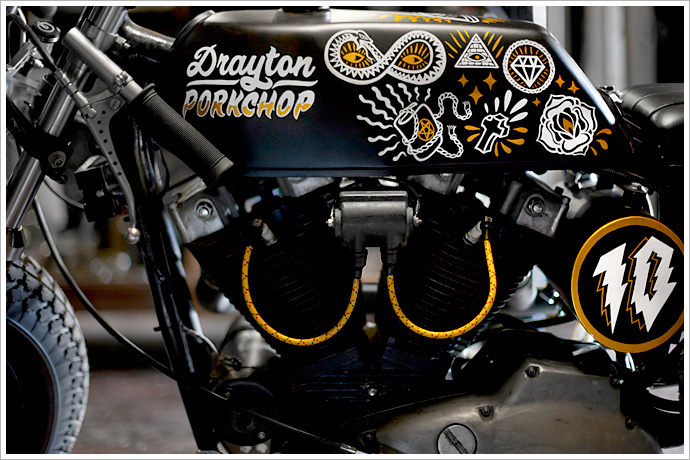 “We started with a ‘72 Ironhead Sportster frame and motor. The bike needed to be low and fat so we laced a sportster drum brake rear hub to a 16” rim and a later sportster front disc hub to another 16” rim, then shod them both with Firestone ANS tyres. A race bike with chunky tyres – what’s all that about? Depends what you are racing on… if you are slamming a quarter-mile on a dirt track this bike would be pretty handy. Then, to keep with the race vibe we went for clip on bars, shortened the forks by 4” and strutted the rear end.” 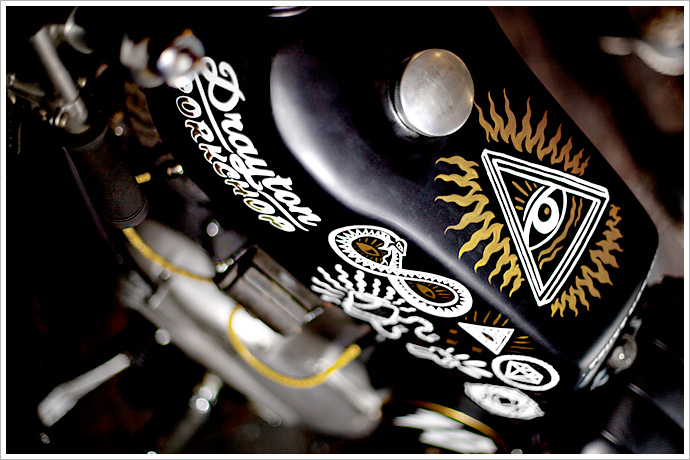 “We hate master cylinders on handlebars, so we set up one operated by a cable lever. But then we didn’t want this set-up totally hidden as we like to see working parts – cables and the like. The parts that make the bike stop and go.

The bodywork was designed to be simple; a use what you got approach. A Yamaha tank was chosen and re-tunnelled to sit on the sportster frame. A bayonet central filler cap was fitted and we also fabricated a cutout for the carb and throttle cable. Then a custom fiberglass tail-piece to continue the race vibe was fitted – completing the slammed squat stance.” 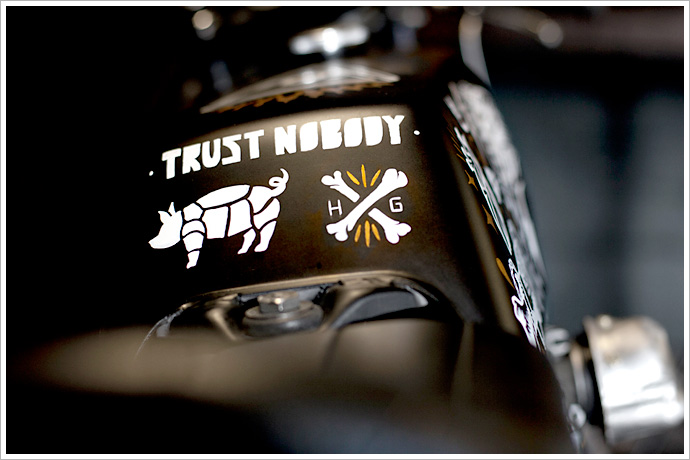 “For the exhaust we wanted something that was tight and industrial looking. We made the high level two-into-one pipe to sit close to the motor and exit from inside the rear right strut, helping to keep the bike compact and narrow whilst also looking fat from the rear.

A key theme on the bike is keeping things simple, a few speed holes here and there. No lights, no bolt on tat, no fancy branded parts, just the raw bones. And when it came to thinking about the design aspects of the bike, it was felt that any visuals needed to compliment the bikes toughness and roughness, too. So many bikes we looked at were very polished, high gloss versions with bright colours and fun typography.” 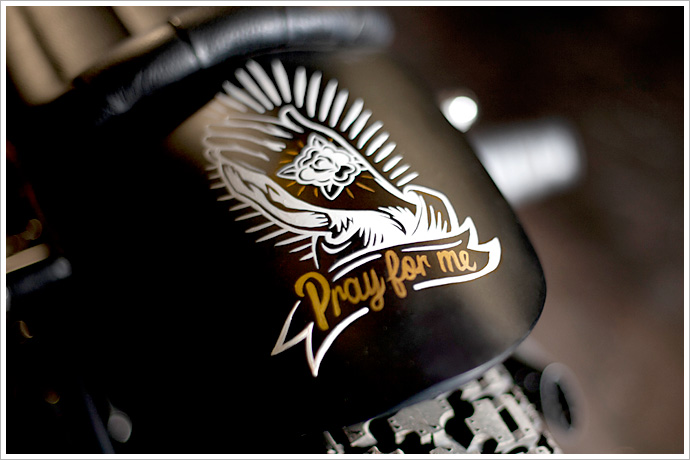 “It had to be matt black, all black everything, that flash of white and gold is the only fancy part about the Porkchop. All the imagery on the bike was meticulously hand painted and each illustration has its own specific meaning. There are odes to old friends past and of course a few of ilovedust’s house brand elements with an illuminati nod thrown in.

It was very important to have a feeling of familiarity, also a worn in quality about the ‘coating’… it’s almost like the bikes been inked.” 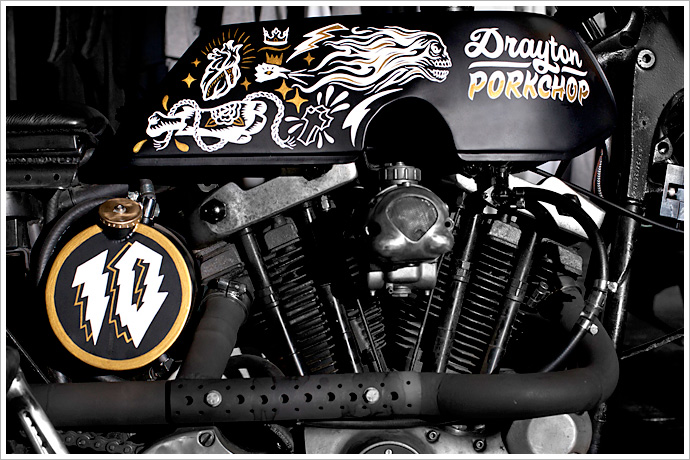 And the boys were kind enough to reveal that this isn’t the last of the bikes they intend to make. “Through building ‘The Drayton Porkchop’, the Ilovedust & BoneShaker bond has grown strong. We have a few other things in the pipeline so stay tuned for more in 2014.”

Somehow, we don’t think that will be a problem. Not at all.