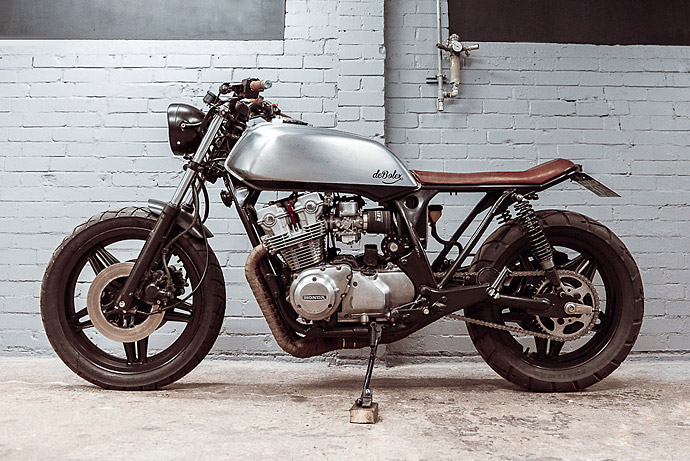 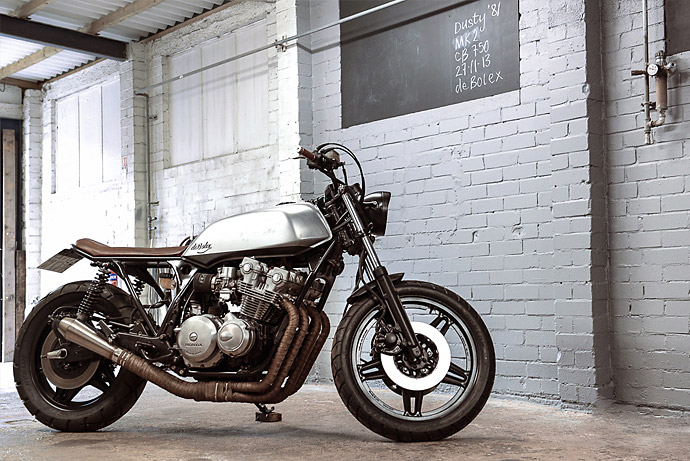 Calum kicked things off by sharing deBolex’s raison d’être. “We recognise the good engineering and quality built-in to many of the big brand production motorcycles. We retain that genetic core, but in our quest to create something individual we strip these bikes back to their bare bones, discard the superfluous and rebuild to put a new heart and soul into the machine.

The differences are always unique. All aspects of the work are carried out in-house, enabling us to keep control of the design and build quality whilst paying extra attention to those finishing touches. From metal fabrication, engine building, trimming, paint work and trial running, we do it all.” 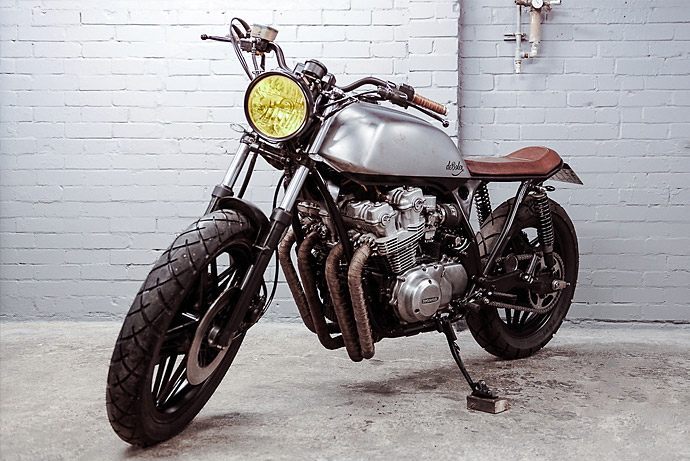 Calum says the concept for this build was to transform a Honda CB750 into a fun usable brat style motorcycle with a finish that would get better with age. “Nothing too pretty, the wearing in of leather and the rust through the lacquer on the bare metal tank are what this bike is all about.”

Sammy, the bike’s owner is a professional photographer living in London, preferring the freedom of a bike to the in-your-face hustle of the underground. “He wanted something with character that could worm through traffic and that doesn’t need a weekend spent polishing.” 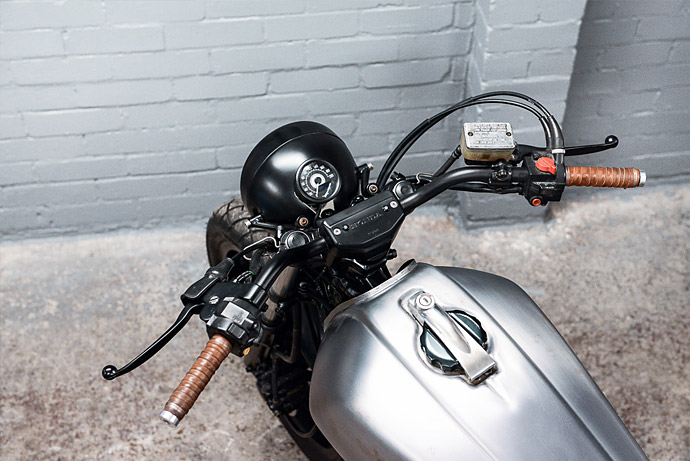 The result is the MK2, a 1981 CB750 DOHC’d sight for sore eyes. “Although not an extreme custom and still rocking the original suspension and wheels, we gave extra attention where we could. For example, the rear light recessed into the tube like it’s always been there, custom brackets hook up the 7” headlight and the ignition barrel relocated under the tank.

Up the front we’ve given some Renthal ultra low bars, leather wrapped grips and we turned up some neat bar ends. Digital speedos supplied us with the perfect speedo, small, satin black, and didn’t break the bank.” 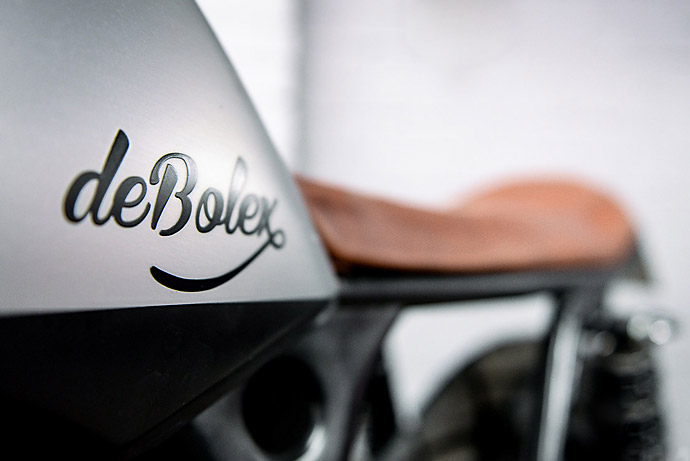 “The top end of the engine received an over hall, replacing timing chains, re-shimming the head and while the barrels and head were off they went through a cleaning treatment which brings the aluminium back like new. A clothing company supplied the leather for the seat; this gave the bike that rustic feel we were after. And a custom exhaust system wound in titanium wrap releases the musical crack of the Honda in-line 4.” 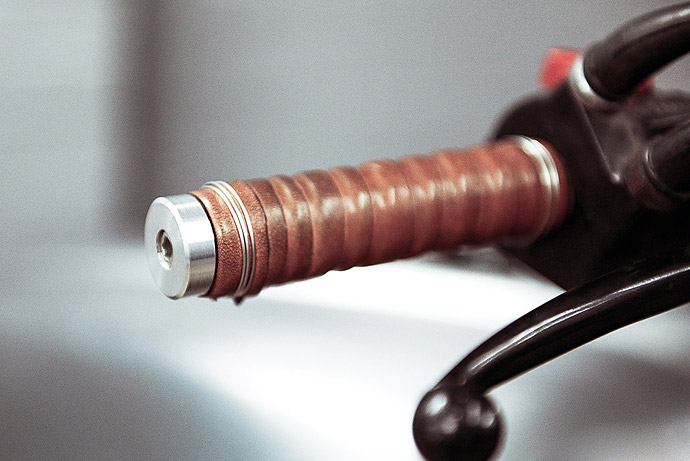 Calum points out that this is the bike that helped kick-start deBolex into business “I was already restoring and tuning classing cars as my day job, but had always had a passion for motorcycles, so when Sammy approached me about building him a bike, I jumped at the chance.” 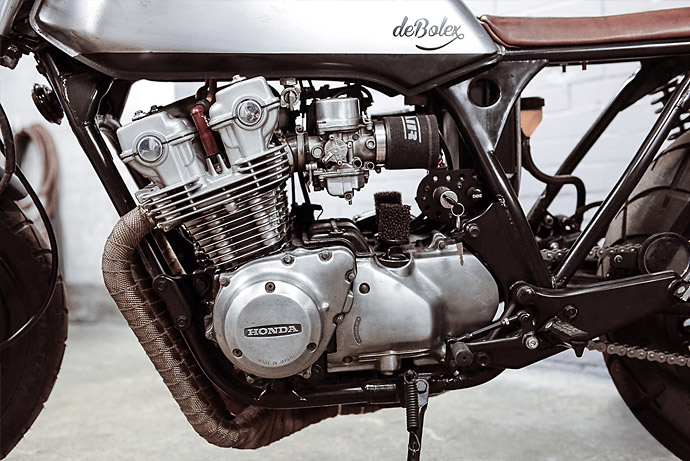 And it seems that the MK2 isn’t the only trick up Calum’s sleeve. “Now with all our focus on motorcycles, the MK2 finished, the MK3 almost complete and the MK4 donor eagerly waiting to be stripped back, we hope we can slowly earn our name and establish ourselves in the custom motorcycle business.” 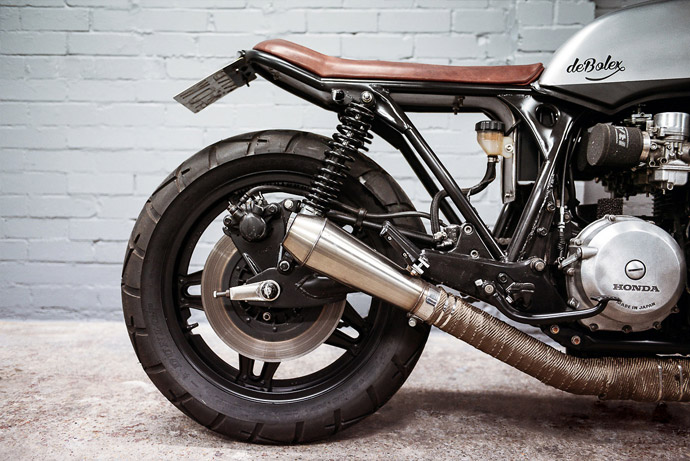 “We have been working hard to complete a website that reflects our motorcycles and have lots of new exciting things to come, including the completed MK3 ready for the MCN show in London on the 14th-16th February, which we are very excited about releasing.”

Wish we could be there, Calum. We really do.