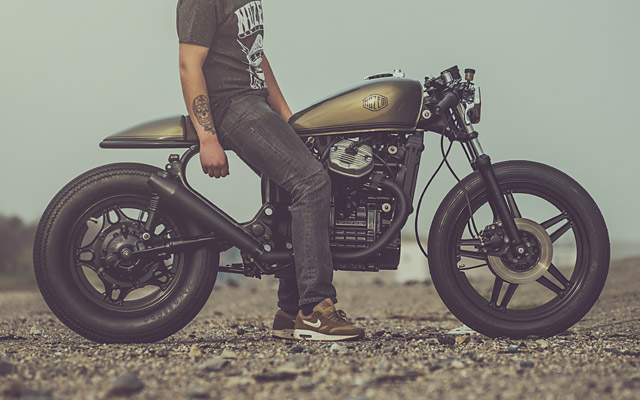 When you’re starting your build with a bike colloquially known as the “Flying Maggot” and other nicknames even less flattering the test of a builders skill is going to be put to the maximum test. Lorenzo and Delano both graphic designers with Nozem Amsterdam were more than up to the challenge of turning a maggot into the classy café that sits before you. But with the likes of Wrenchmonkees, Hageman Motorcycles and Moto Mucci already having built incredible examples, making a CX500 stand out from the crowd is increasingly more difficult. And the Nozem boys knew it “The idea was to make a cool, authentic looking CX500, there are a lot of  CX500 builds nowadays, so it was a challenge to make the bike stand out.” 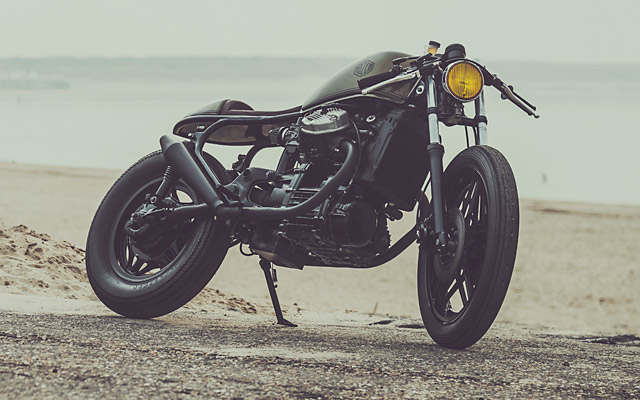 While early knockers of the CX heavily criticised the plastics it is the frame that is the nightmare of any builder, so first task was cutting, shaving and grinding until a smoothed out look was achieved and all unnecessary tabs and brackets removed. The sub frame was then heavily modified to further neaten the overall look and lower the stance of the bike, including taking 20mm out of the front forks. Lorenzo who doubles as a fabricator made new shock mounts to hang 260mm Harley Davidson items and fitted up a set of custom twin tail lights. 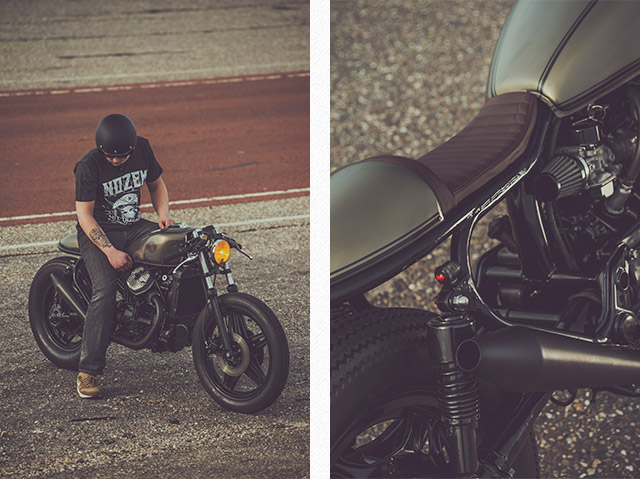 With the backend now almost unrecognisable from the factory Honda effort the Nozem boys then turned their attention to the often maligned front end. All the plastics are gone, the bulky switch blocks ditched and the standard bars consigned to the scrap heap. The triple trees were shaved and all holes filled with just a small bracket left for the speedo. Attached to the new clip-ons are a CBR600 clutch lever and Fireblade Brake master cylinder all complete with braided lines. The headlight comes from a 4 wheeled creature, a Jeep from the 1980’s and that would leave a tidy up suitable for most. 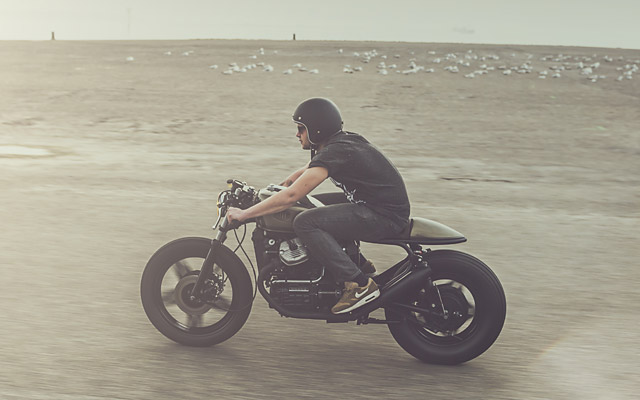 But Lorenzo and Delano wanted to go further. The wiring loom has been stripped of any unnecessary components, the starter button is hidden under the seat, battery is hidden under the engine were the big old collector box once sat and to avoid the look of light switches, they are left permanently on. This is a bare bones bike so the horn was ditched but the eBay ordered “Hooligan mufflers” mean you know when this CX500 is coming! 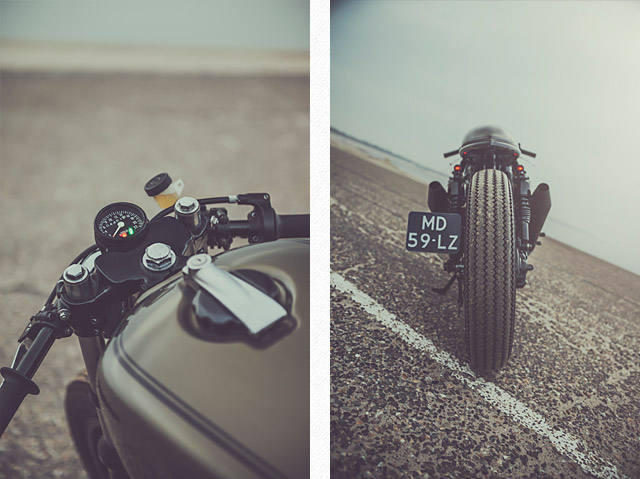 To take care of aesthetics the wheels, frame, swing-arm, custom footrests, clip-ons, triple trees and many small components were powder coated black. The tail-piece was made from fibreglass, along with the seat pan while a local upholsterer used real leather to cover the seat also made at Nozem. The road warrior tough paint is BMW Diamant Schwarz and Messing Metallic and who swung the gun? Lorenzo decided he’d have a go and picked up a paint gun for the very first time! 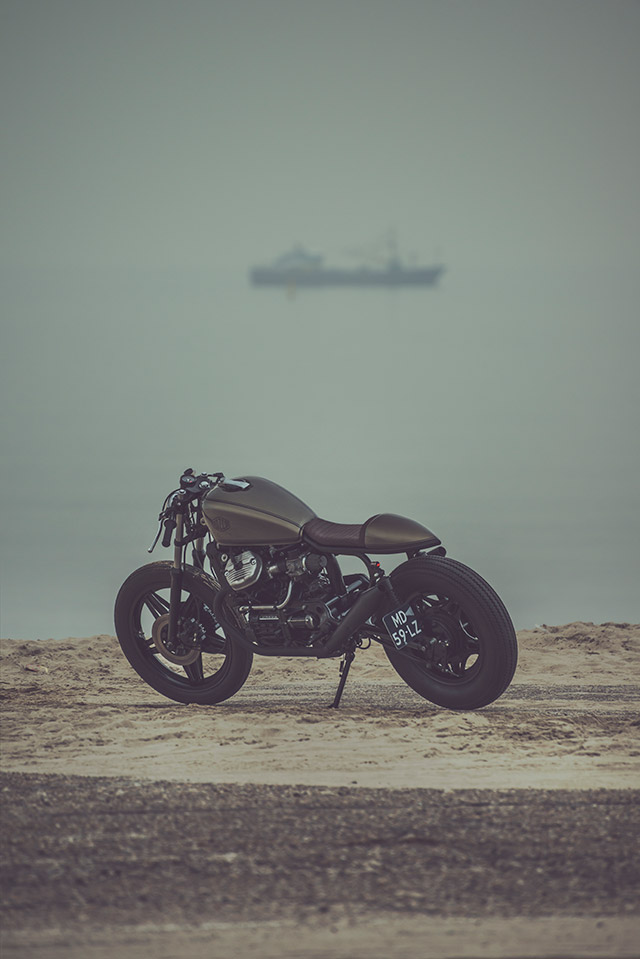 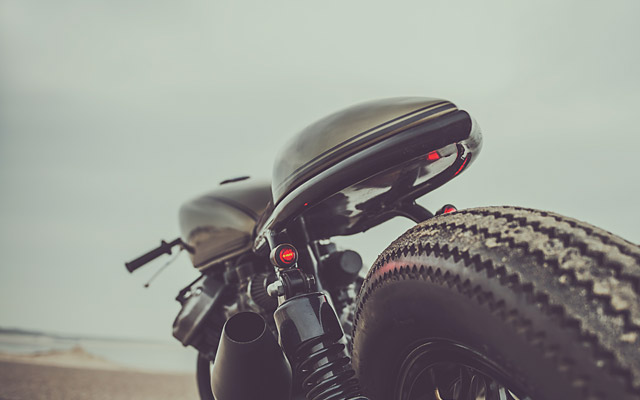 Keen to show off his handy work Lorenzo rides the bike daily in the summer time and to ensure he is never stranded the engine was treated to a new stator, seals, bearings and gaskets. 30 years ago CX500’s cruised the globe, a favourite of couriers, now Amsterdam plays home to a CX that retains all the old charm, none of the horrible plastics and what is left is a hardcore custom café bike. Design brief completed, project executed, let the riding begin!