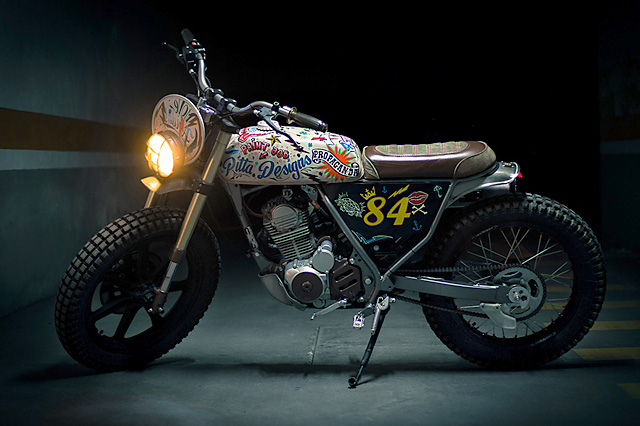 Another day, another great custom from Portugal. We’re not sure what they are putting in the Peri-Peri but whatever it is, we’re more than little keen to get our hands on some. This graffitied gob-smacker is from Dream Wheels Heritage, a shop straight out of Porto, north of Lisbon. Hélder Moura and his team of merry metallurgists have created the best small capacity Honda we’ve seen in a month of Sundays. And it’s got a rack for your skateboard, to boot. What’s not to love? 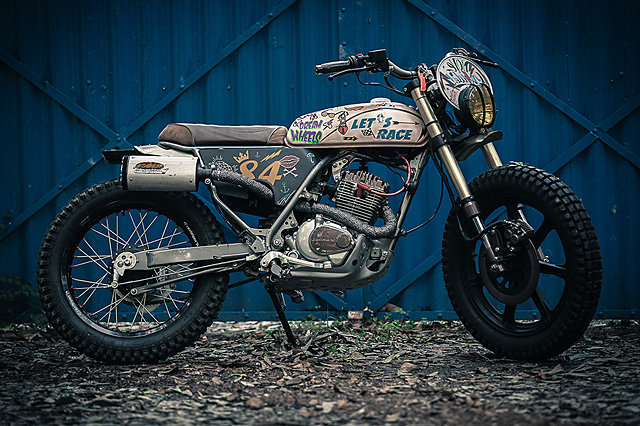 “With the law allowing anyone in Portugal with a car license to ride bikes up to 125cc without the need for extra testing, this is definitely a new market that could become quite interesting,” notes Hélder.  “So far we have not seen many bike builds based on such small capacities. Dream Wheels Heritage aims to change that and therefore we decided to tackle this project: our Honda CLR125 CityFly Scrambler.” 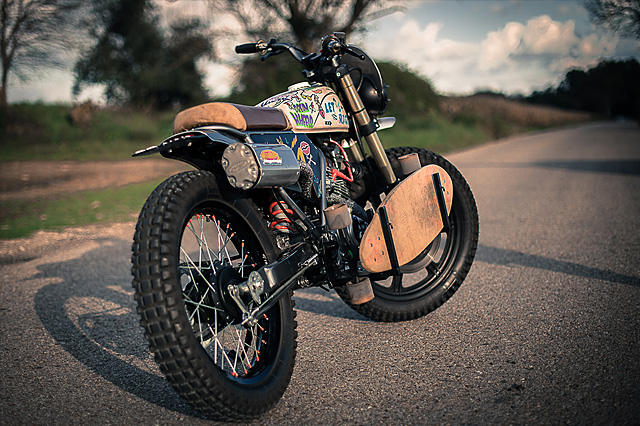 “Originally, the Honda CLR 125 City Fly was a natty little urban bike (forget the supposed off-road potential) to be enjoyed mostly in the city and in flat areas, mainly because its 125cc engine was not designed for speed, but to be economical and reliable in daily use. This type of bike was and still remains the model of choice for Portugal’s delivery of pizzas, couriers, and so on. And it was a pizza guy that sold us this bike, too. He bought it specifically to ride for work because he had no full bike licence. He sold us this bike and then took some lessons to get a licence to ride his new motorcycle – a Honda NX400.” “This Honda uses the same engine as the 124cc Honda XLR125, which means it’s an old lump – but it’s already proved to be extremely durable and reliable one. In other words, typical Honda. It stock form it puts out around 11 bhp and 8 ft-lb or torque from a bike that weighs in at 120 kilos.” 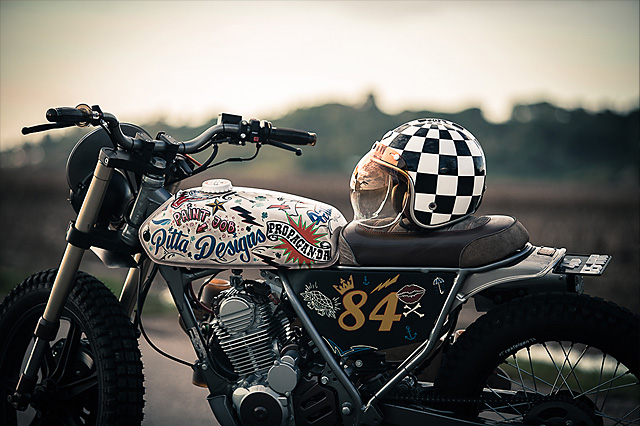 “What we were really looking for when we were searching for a donor was to get a bike that had all the legal documentation and that was in a decent, working condition. Once that was sorted, we decided that the style we wanted to give this bike was the Scrambler look; one whose functionality was much more off-road capable than the original design and who’s lines were a good mix of the new and the old.” 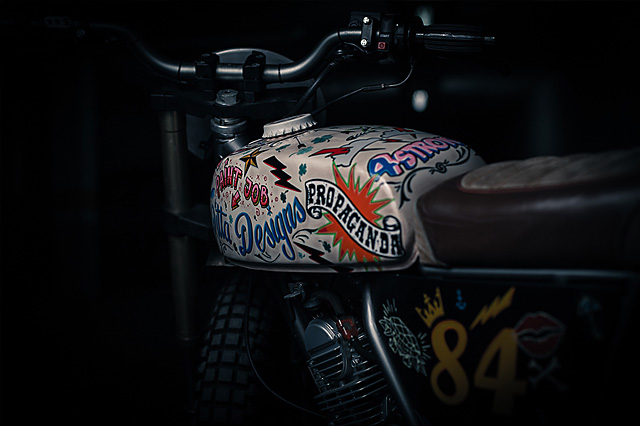 “The list of what we changed is pretty lengthy. Basically, it started with a new sub-frame, seat, fenders, and the restoration of a Yamaha FS1 tank from the 90s. We customized an ex-fridge magnet to make the gas cap. The new handlebars are a Renthal ‘Fatbar’ model. Then we added a new headlight and an oval front plate.

The tires are Heidenau K67s and the front 18” wheel is from an Yamaha XS400. We added some new 18″ rims and spokes at the back, and finished them off with some red spoke clamps.” 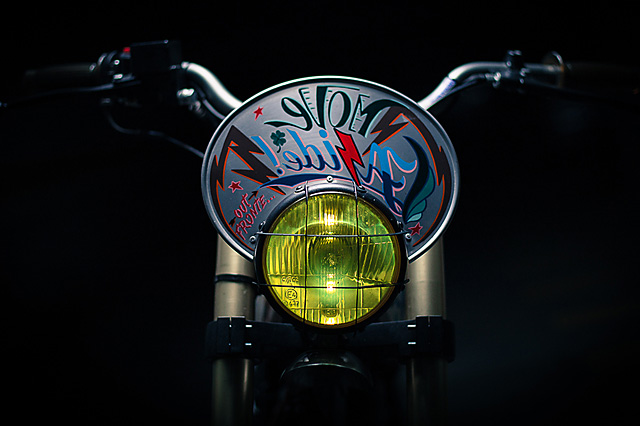 ‘The front brake and disc are also from a Yamaha XS400. The fork is a reworked set from a Suzuki RMX 50. New NGK spark cable was added, along with some new air filters from K&N. We used some new light switches and a horn from Blitz Motorcycles because we really like their stuff.

To finish, we added a new LED brake light, lowered the whole thing about 10cm and added a used FMF Mega Max II exhaust with a new, handmade collector. And as you can probably see from the photos, the bike also has a removable skateboard holder.” 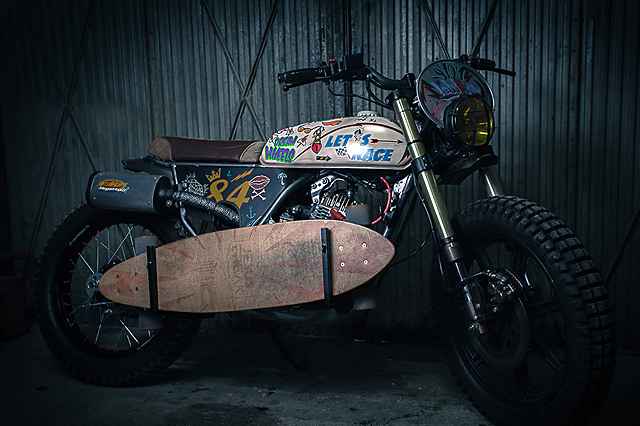 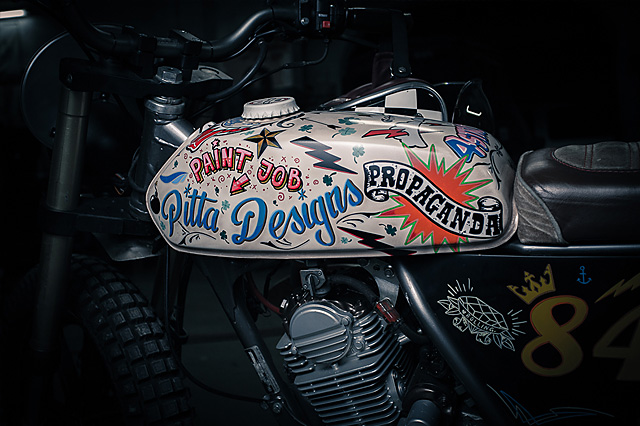 “We couldn’t have done it without the support of Pitta Designs who did all the paint and typography, Luís Conrado for the seat, Bicas Customs for the skateboard and Pedro Marcelino for the photos. We really hope your readers like it.” 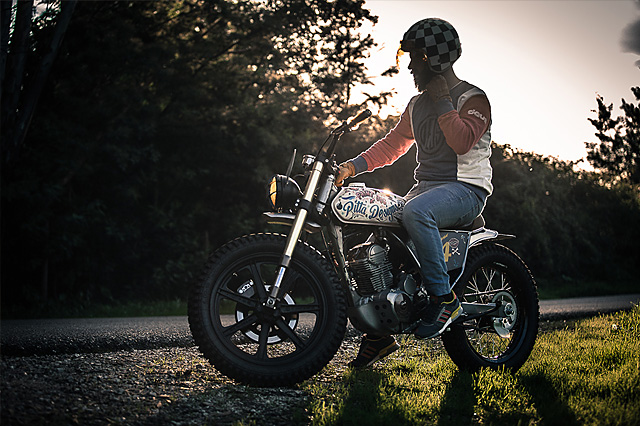