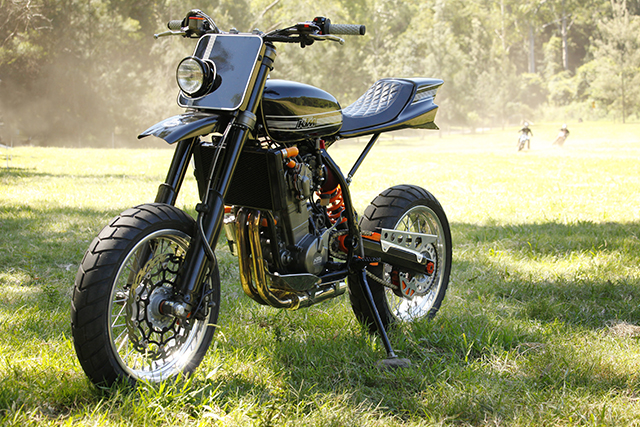 It’s a familiar story, a motorcycle enthusiast sees a big dollar build on the internet by one of the industry legends and tries to replicate what they see. A year later, thousands of dollars wasted and a newly listed “Unfinished project” for sale on eBay and it all comes to a sad end. But Chad Edwards was always going to be too smart to fall into that trap, he adapted when he had to, learnt as he went and with the help of Brendan Forrest from Premier Exhaust & Automotive has designed and built himself a killer KTM Tracker styled Motard on a reasonable budget. 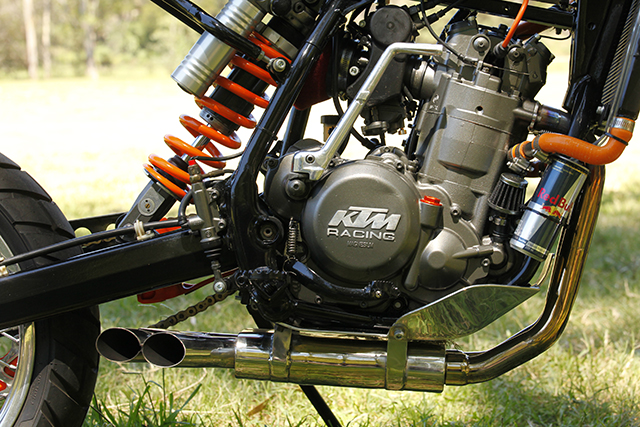 Bought for just $1100 due to a suspected bent valve, Chad picked up the 2001 KTM 520 EXC-R at what is a bargain price. But after a couple of nights swinging the spanners he’d diagnosed the problem to be carby related and with a rebuild kit installed it was running like a dream. The first thought was to build a Café Racer KTM just like the RSD 525 by custom bike building legend Roland Sands. But having picked up a set of KTM Behr Super Motard Rims Chad quickly decided the bike was just way to fun now to move away from a Motard setup. But wanting a look of his own the decision was made to go with Motard performance and Street Tracker style. With the Behr rims fitted the rest of the handling needed an overhaul which came in the form of 40mm shortened forks upgraded to gold valves and the rear shock being slightly shortened & stiffened using a heavier spring. 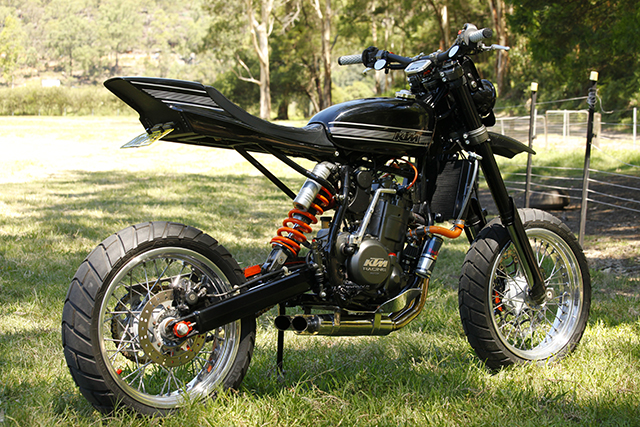 Making a dirt bike look like anything but is never as easy as it looks, odd shaped tanks and plastics lend themselves well to blasts in the bush but to create a different look requires a great deal of skill. To get the individual look he was after Chad decided on a replica CB100 tank with custom fabricated mounts to adapt it to the frame. But this meant the standard radiator would never go back in place so a CF-Moto 650 item was secured underneath with custom hangers. To really make the Tracker look work a custom subframe was always going to be required, in this case rose jointed to new mounts that perfectly position the HD750 replica seat. Just like the subframe the number plate holder and head light mount were fabricated by hand, the later supporting a 4 ½ inch Bates style headlight. 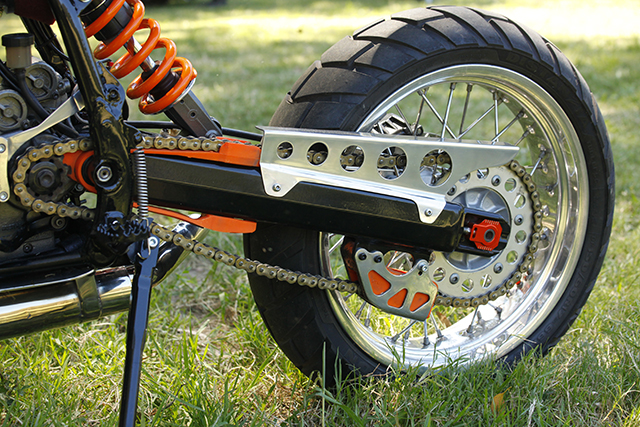 With the fabrication complete the bike was torn down, with the frame & tins sent away to powder coat & paint. With the bike in pieces in made sense to give the engine a freshen up, the heads were ported, a Hot Cam fitted and a new Wossner high comp piston installed. Chad says tuning is still a work in progress as the new cam draws far more air than they can find an air filter to handle, but with it removed the KTM pumps out a very impressive 56 rwhp. Wanting to maintain the look of the negative space between seat and tire the exhaust needed to be well thought out; leaving the only real option to go under slung with a fully handmade & shaped stainless muffler & system made to hang from the bash plate. Not only does the Motard stance give plenty of room to work underneath the bike, the final design is beautiful to look at and you can be sure barking loud when the throttle is cracked. 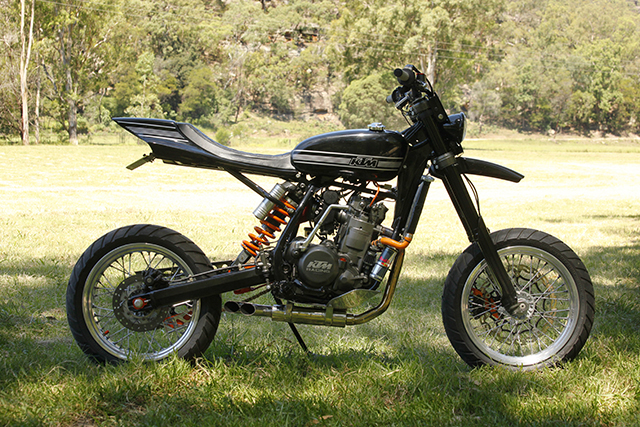 Pro-taper Carmichael Contour fat bars give Chad something to hold onto while a Trail tech Vapour dash on a custom fabricated mount gives the vital information right in the riders view. Chad initially intended for the bike to be fully wrapped in brushed matt titanium vehicle wrap, but a fuel leak on its maiden test at Sydney Motor Sport Park destroyed that design. Being a sign writer by trade meant Chad had no problem with a redesign and what he came up with is the stunning black & vintage style KTM Decals you see before you. 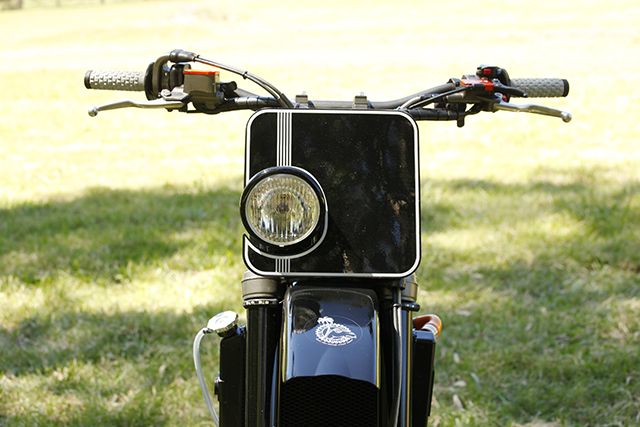 Nicknamed “Ol’ Keithy” this KTM has gone from the desire to build a RSD inspired Café Racer to a Tracker Styled Motard and the result is truly spectacular. With a bike that looks as good standing still as it does ripping up the streets just the way he likes it, Chad has taken the path in true personalized perfection. The fact that Ol’ Keithy can also show a clean pair of heals to many bigger bikes on the track would definitely get the thumbs up from Sands and Chad can be very proud of this very unique dirt bike transformation. 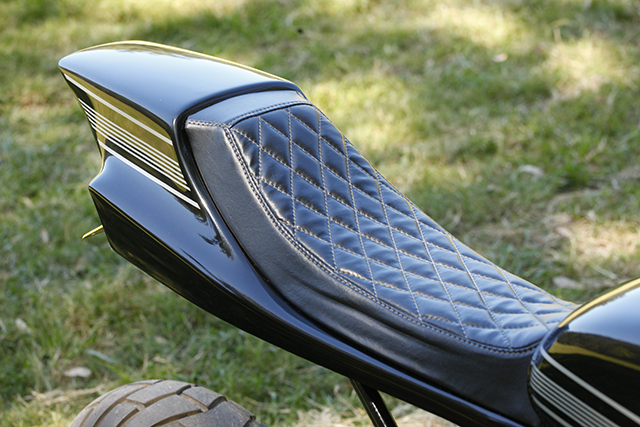 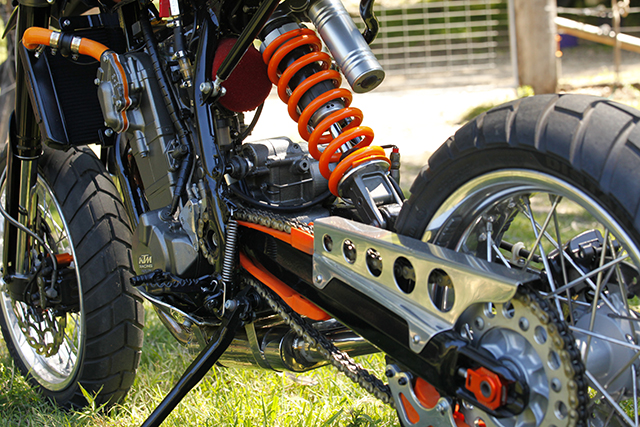 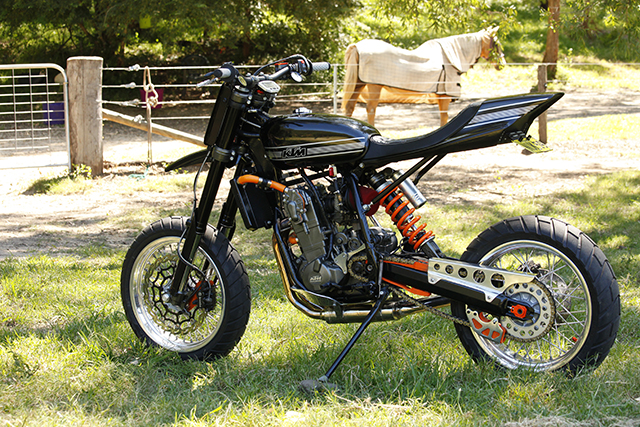