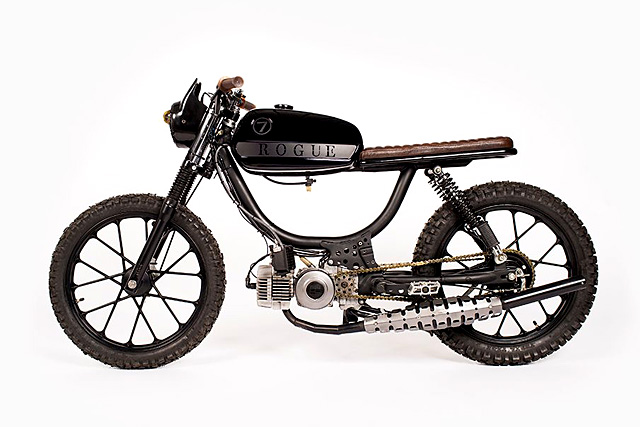 As most long-term readers will know, we’re always up for posting a sweet little ‘ped every now and then. And that goes double for someone with the track record of Philly’s Austin Tremellen and his Rouge Builds moped shop. He cheerfully informed us that this, his latest build “is called ‘Sieben’ and was commissioned by the CrossFit superstar Chris Spealler.” We have almost no idea what that means, but with a bike that looks this good we’re happy to just sit back, smile and nod appreciatively. CrossFit… that’s like Motocross, yeah? 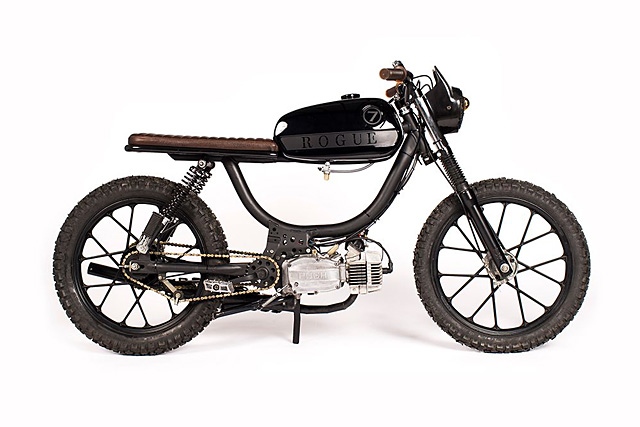 “We called the bike Sieben,” Austin notes, “and it’s a moped build commissioned by Utah’s Chris Spealler, who’s the biggest name in American CrossFit at the moment. This bike, named after both the German origins of the moped and Spealler’s competition number, started as a 1980 Puch Magnum.”

To get things started, Chris sat down with Austin and briefed him on the functional specifics and general aesthetic he was after. Expecting more of the same throughout the build, he was then rather taken aback when Chris handed over creative freedom for the rest of the build. Dream brief, you ask? You’re not wrong. 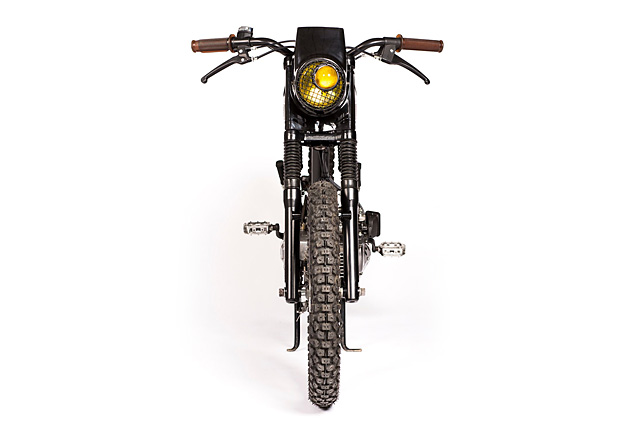 “Chris wanted to ride doubles with his wife while also having some pick-up when he needed it. Given the added weight and desire for speed, I knew the bike’s suspension would have to be upgraded. I chose to go with hydraulic forks and new adjustable rear shocks.”

The 2.5″ front and 3″ rear German-made Heidenau knobby tires, rebuilt brakes, and sealed-bearing hubs all play well together to provide some smooth and solid handling. And in keeping with the double-up requirement, the swing arm was extended by Rogue to allow more room for a passenger without them sitting over the rear axle. 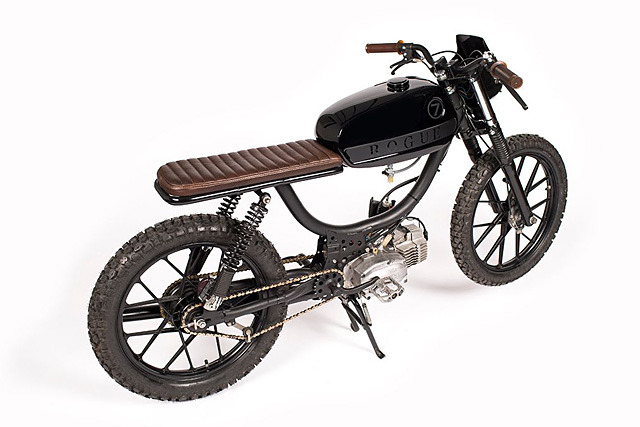 With a few custom builds under his belt, Austin was itching to use something other than a stock moped tank on this job. “To fulfill this need for something a little more exotic, I reached out to the The Netherlands. The other side of the pond made and used small motorcycles for a far longer time than the U.S., making it possible to find some rare vintage tanks.” He was able to score the perfect tank off of a Zundapp (that’s the moped brand, not the bad guy from the Cars movie) while adding a more Germanic flavour to the build. 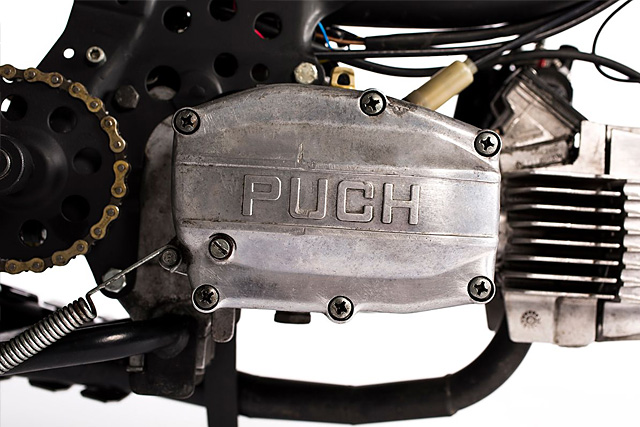 “Then to add a few unique details, which is a signature aspect of all the Rogue builds, I constructed an ocular headlight out of a lens and a rear tail loop constructed out of stock handlebars. These are probably my favorite aspects of the build. To finish off the handmade details, I used one of Ian Halcott’s a.k.a. TwinLine’s perfectly constructed, handmade leather seats.” 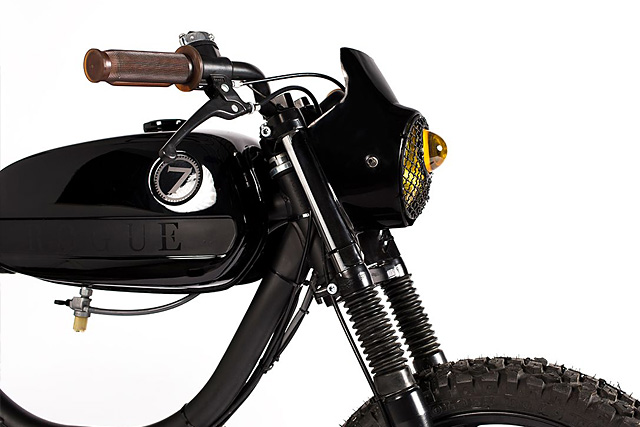 “Chris mentioned to me that he had owned a motorcycle in the past and he really enjoyed shifting gears. To try and mimic that shifting, I put aside the single speed engine and went with a Puch two-speed engine known as the ZA50. The bottom end was also rebuilt with fresh bearings and a high performance crank to handle the power increase.” 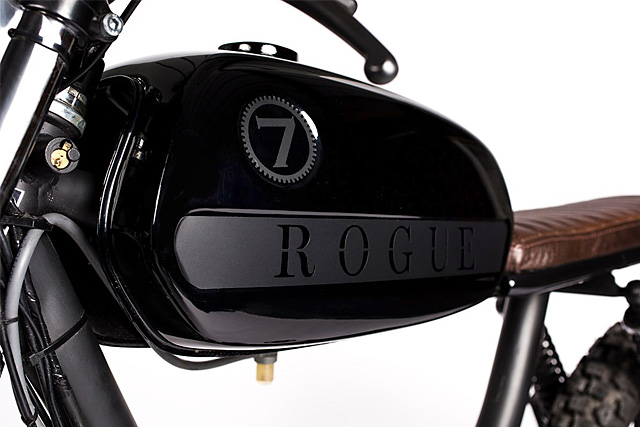 To juice the ‘ped up, Austin got stuck right in to the oily bits and deftly sourced a 19mm Dellorto race carb, upgraded 4 pedal reed block, an aggressively ported 64cc Puch Polini cylinder, a high-compression head, an auto-retarding ignition and a handmade expansion chamber exhaust. 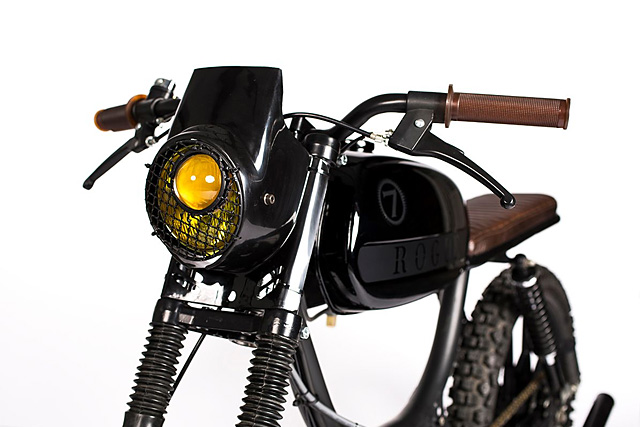 “By the end of the shakedown run,” says Austin “I was pushing this 145lb bike up to 55mph and enjoying every single second of it!” Never fear dude. Maybe a little less weight around the love handles and you might just be able to break the big six-oh. If only there was some kind of competitive fitness sport combined with a physical exercise philosophy to help you strengthen and condition yourself…